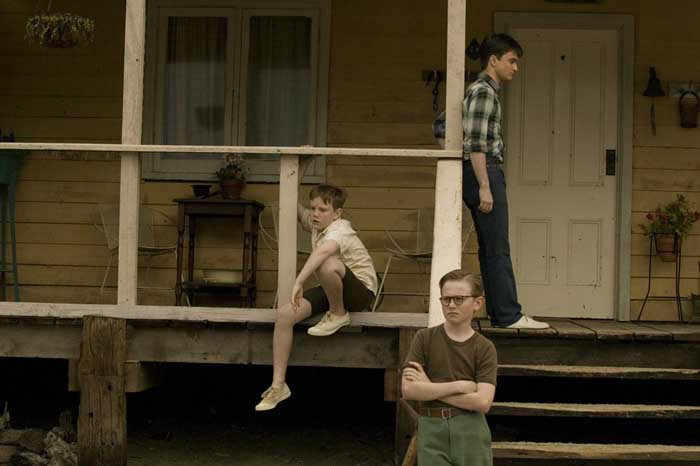 Four orphaned boys head to a seaside resort in Southern Australia for a summer holiday. Once there, they learn, through rumor, that a local couple is looking to adopt a child just about their age. The longtime and close friendship of the boys is tested by the possibility of a real home and family for one of them as they each vie for notice and adoption in December Boys.”

Based on the novel by Michael Noonan, “December Boys” has the feel of the 1971 coming-of-age film, “The Summer of 42,” but is better in nearly every way, replacing rank sentimentality with honest emotion. The four orphans – Maps (Daniel Radcliffe), Misty (Lee Cormie), Spark (Christian Myers) and Spit (James Fraser) – are trundled off on holiday to the seaside home of Bandy (Jack Thompson) and Skipper (Kris McQuade). Warmly welcomed by the kind old couple, the four settle into the easy pace and exploration possibilities of their new, temporary home. One day, Misty spots a magnificent stallion romping in the sea. He calls his pals to see the beautiful creature when they see another beauty, Teresa (Victoria Hill), emerge from the waves. Tess and her affectionate attentions smite the three younger boys as they beam at her. Only the older Maps shies away from her gentle touch. The adults in the area have a get together and the four boys sneak in to steal a beer. Near sighted Misty’s glasses are knocked off and, when the other boys set off to enjoy their ill-gotten gain, he eavesdrops on the local priest, Father Scully (Frank Gallacher), and Tess’s husband, Fearless (Sullivan Stapleton). They talk about Teresa not being able to have children and the priest suggests they adopt one of the boys. Misty, thrilled with the prospect of a home, keeps the possibility to himself and secretly campaigns for the couple’s attention. The secret will have a major impact on the boys’ friendship. This is a multi-layered story that shifts from Misty’s machinations to get adopted to Maps when he meets a pretty, precocious local girl, Lucy (Teresa Palmer). A romance sparks between the two and Maps gets his first kiss…and more. This side story is nicely developed and shows that Radcliffe can do more than Harry Potter. Teresa Palmer is perfect as Lucy and you can understand why Maps would fall for her with her vivacity and charm. This little romance is a sweet but melancholy, in the end, sojourn from the main story. Director Rod Hardy musters his fine cast to provide a nuanced story, adapted by Marc Rosenberg, about coming of age, friendship, old age and young love. Of the four boys, only Misty and Maps are given full shrift with Spit and Spark relegated to role of being adolescent boys, but amusing nonetheless – especially Spit, whose nickname is for obvious reason. The supporting cast is well played from top to bottom, from Victoria Hill as the winsome Tess and Sullivan Stapleton as Fearless (who has his own secret) to Jack Thompson and Kris McQuade, touching as an aging couple in their twilight years. December Boys” (the title comes from the fact that all four boys were born in that month) is not just a well-told story. Technical credits are impressive with lenser David Connell composing some of the most beautiful photography since “Fly Away Home (1996)” with the stunning scenery of Southern Australia. Location and production design (by Leslie Binns) resonate with the 1960’s setting.