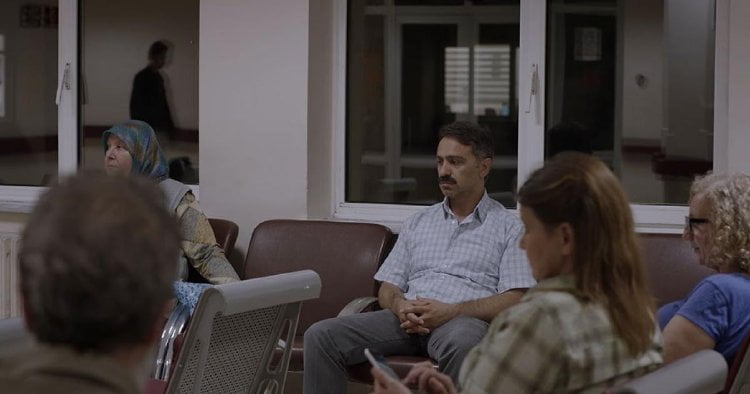 When his lonely neighbor Huriye is taken ill, Tufan (Serdar Orçin) takes her to the hospital where a doctor advises she not be on her own. The kindly man takes Huriye (Rüçhan Çaliskur) into the apartment he shares with his wife Mukaddes (Ipek Türktan) and young daughter Simge (Öykü Sevinç). But for Tufan, no good deed goes unpunished in “Debt (Borç).”

I was expecting writer/director Vuslat Saraçoglu’s film to be a modern day, Turkish twist on the old Bette Davis classic “The Man Who Came to Dinner,” but it’s something quite different. While we quickly become sympathetic to the plight of the hapless Tufan, every character around him is experiencing some kind of pain, be it financial or emotional, and how they interact with each other is subtly exposed as a series of debits and credits. The film opens with a symbolic close-up, Tufan luxuriating in a vigorous back scratch by his wife Muko (‘I’ll scratch your back...’). This is a husband who doesn’t appear to take things for granted, showing his appreciation. He is a soft-hearted man, delighting in spending time with his young daughter, crying out ‘oh sweetheart!’ when a young bird falls from the sky (that bird, named Atom by Simge, takes up residence on the Guls’ porch balcony). So it comes as no surprise when, interrupted by pounding on their door late at night, Tufan springs into action to help an ailing neighbor. Muko is also a kind woman, but she is immediately concerned about the impact of having a sick, elderly woman take up residence on a couch in the family’s small apartment. Muko may be a housewife, but she has interests of her own, like learning how to belly dance watching a videotape in her apartment living room. She gets together regularly with a circle of female friends and Huriye’s presence is going to disrupt her upcoming turn at hostessing. As the story progresses, we begin to view Tufan’s behavior in a different light. He insists on picking up the check at a cafe with his friend and coworker Osman (Ozan Çelik), yet blanches when a pharmacist informs him that a machine prescribed to aid Huriye’s breathing is going to cost 320 lira (about $60). He is the most reluctant of the staff of three at Vahap’s (Feridun Koç) printing shop to confront the man over three months of back pay, making excuses for the boss he believes will treat him better for his loyalty during hard times, yet frets about his upcoming car payment. Muko keeps pressing him to hand off Huriye’s care to her daughter, Dilek (Ülkü Aybala Sunat), a singer, but when he finally meets up with her, he is horrified that she wants to put her mother into a care facility. In other words, Turf an believes Dilek ‘owes’ her mother, his criticisms of her ‘oddness’ as a child sending up a red flag (in contrast, Saraçoglu depicts Huriye caring for the sick Simge, her consideration for Muko recognizing the woman’s exhaustion). He is sympathetic when the print shop where he works is robbed, but unable to consider his boss may have engineered the theft for the insurance money. When everything comes to a head with Huriye and Tufan finally blows, we are surprised to see Muko’s tears and pleas for her husband to stop. Perhaps all along, Muko has preferred to see a generosity of spirit in Tufan, rather than an accumulation of goodwill from which to draw upon in future. The actors are all very good here, Türktan especially endearing. Saraçoglu’s given us some meat to chew on, but her ending is too ambiguous, an elastic stretched to its breaking point snapping back to normality. Her film gives us a bird’s eye view of middle class life under stress in Turkey, but while some of her characters’ inexplicable contrasts may be true to real life, they are perplexing in a film where we sometimes struggle with the filmmaker’s point. Grade: