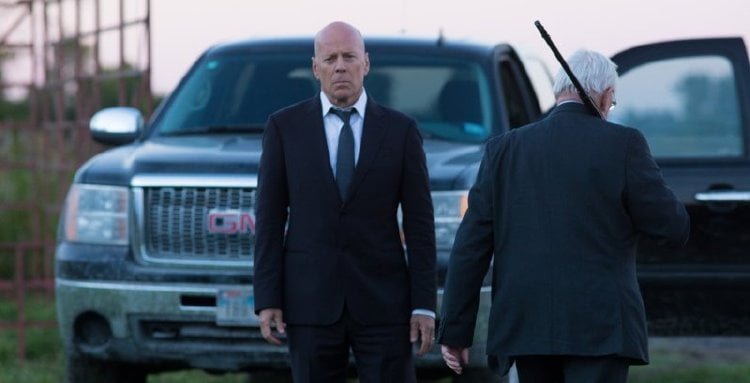 As an ER surgeon, Dr. Paul Kersey (Bruce Willis) is well versed in the aftermath of Chicago street violence but never for a moment considered that his own wife and college-bound daughter would arrive on gurneys in his place of work. Once he sees the overwhelming open case board in Detective Kevin Raines's (Dean Norris) office, Kersey decides to take matters into his own hands, earning the media moniker 'The Grim Reaper' in "Death Wish."

Just what possessed MGM to release this film in the wake of a Florida school shooting that has the majority of Americans calling for a ban on assault weapons? This remake of the 1974 Charles Bronson vehicle, a grindhouse film rooted in the crime laden, grittier New York City of decades past, is not only irresponsible, it's just plain ridiculous, Joe Carnahan's ("Smokin' Aces") screenplay and Eli 'torture porn' Roth's ("Hostel," "The Green Inferno") direction implying both a satirization and glorification of American gun culture. It's also sloppy filmmaking, the film's explosively violent climax relying on its protagonist's foreknowledge of exactly how events will play out. There are exactly two worthwhile components of this film - Elisabeth Shue's fine, if abbreviated, performance and a primer on what not to do at a parking valet podium (as Kersey's daughter Jordan, Camila Morrone is a fresh new presence who needs a little more seasoning). That is where MJ (Luis Oliva) overhears plans for an evening out just as he accesses the family's address in their car's GPS. But Paul's called in to work unexpectedly, leaving Lucy (Shue) and Jordan alone on the night in question. One of the three masked men (Ronnie Gene Blevins, 'Twin Peaks') who've broken into their home decides to add rape to their robbery and when Jordan fights back, so does Lucy. Lucy is shot, Jordan left in a coma with a serious head wound. Brooding in his basement, Paul catches a bonkers commercial for Jolly Rogers featuring over-caffeinated spokeswoman Bethany ("The Green Inferno's" Kirby Bliss Blanton) shilling 'tactical furniture' that dispenses assault weapons from hidden compartments (and if a gun in the first act guarantees its use in the third, we just know who is going to be redecorating). Paul's not ready on his first visit to the gun store, but when a pistol drops out of a shooting victim's waistband, Paul secretly scoops it up. His debut as a vigilante is another happy accident as he takes aim on an active carjacking. He's victorious in the ensuing gun fight, all captured on an eyewitness's phone. The next day, everyone's got an opinion on 'The Grim Reaper.' There are so many problems aside from the obvious, it's hard to know where to begin. How about Paul's father-in-law Ben (Len Cariou, "Spotlight") pulling over after his daughter's funeral service to take a shot at 'poachers' who've shot a deer in someone's back yard? Or the 'running' joke about the spelling of Kersey's last name that makes about as much sense as the character of Paul's blue collar brother Frank (Vincent D'Onofrio)? Or that Raines and his partner Detective Leonore Jackson (Kimberly Elise) don't appear to do anything? Or that putting Willis in a hoodie on dark, rain slicked streets cannot help but call up memories of a far better film ("Unbreakable")? Or that the smug Kersey seems to entirely forget to his daughter after the film's halfway point? As the film winds up to wind down, logic is thrown out the window, Lucy's killer (Beau Knapp, "Billy Lynn's Long Halftime Walk") revealing himself, the cops abetting the very crime they've been investigating with a wink and a smile? Even composer Ludwig Göransson's ("Creed") score is sappily suspect. 2018's "Death Wish" will probably score with a certain audience. You'll be safer at home. Grade:

I remember thinking, way back in the 1970s when I saw the original “Death Wish (1974)” with Charlie Bronson, that it was a hack film that came out at the right time in our cinematic and social history. New York City and the rest of the country’s cities were wracked with ever escalating crime – robbery, rape and murder gripped the urban landscape. So, when you put the great Charles Bronson on a path to kick ass, take names and kill perps, it struck a chord with the movie-going public. (Also, compared to “Death Wish 2 (1978),” the original is high concept art.) Now, let us talk about the remake of that now-considered-a-classic vigilante flick. Bruce Willis reprises Charlie’s Paul Kersey character and makes it, well, very different. What I mean is, if you consider the original a totem and reflection of its time, the remake comes out at the exactly wrong time. What worked quite well in the 1970s is now exceedingly inappropriate. Although, it is timely with the “arming teachers” debate as the movie seems to advocate arming doctors, too. The new “Death Wish” is all flash and near zero substance. There is no nuance and no socially pertinent content. I cannot tell if director Eli Roth and scripter Joe Carnahan (adapting the 1974 screenplay Wendell Mayes who adapted the novel by Brian Garfield) watch the news and understand what is going on, gun-wise, across the America. Now is not the time to bring out a film that is positive about vigilantism and vengeance down the barrel of a gun. Beside all that, it just is not a very good film. In fact, I would say it is just plain bad.