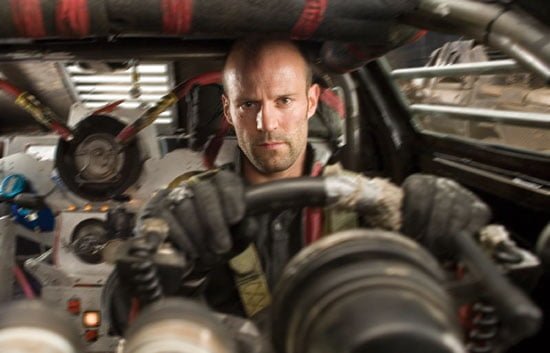 Terminal City Prison warden Hennessey (Joan Allen, "The Upside of Anger," "The Bourne Ultimatum") sets up ex-con Jensen Ames (Jason Statham, "Crank," "The Bank Job") because she needs the speedway champ to don the persona of fan fave Frankenstein in her gladiator-like, no holds barred game where felons fight to their ends in a "Death Race."

Writer/director Paul W.S. Anderson ("Resident Evil") updates Roger Corman's "Death Race 2000" all the way to 2012 and predicts the U.S. economy will have nosedived to the point that crime is virulent and U.S. Industries run our prison systems. Despite the fact that jobs are scarcer than hen's teeth, there will still be 50 million people able to pony up a $250 pay per view fee to watch a bunch of murderers, rapists and railroaded innocents try to annihilate each other from within heavily armed and armored vehicles on the way to the finish line. If you're willing to overlook lapses of logic like this (our hero, Jensen, just received $300 for 120 hours of work the day his plant shut down, to give some perspective), as well as some risible dialogue (what was Joan Allen *thinking*?), "Death Race" has all the genre elements in place. In a typically gray, grimy industrial environment, police respond to a non-riot at the plant closing where Jensen Ames and his buddies are screwed out of most of their wages. He's got a loving wife who has made a home out of an apartment in a depressed area and a new baby daughter he adores, but no sooner is he home than an intruder has knocked him out and set him up as his wife's murderer. Welcome to Terminal City, where Hennessey makes him the offer of standing in for Frankenstein. The carrot? Five wins in Death Race means release and Frankenstein had already won four before dying on a prison operating table. After receiving the typical violent welcome from fellow inmate Pachenko (Max Ryan, "The League of Extraordinary Gentlemen"), Jensen is introduced to Frank's crew who observed the newcomer's fighting spirit. Coach (Ian McShane, HBO's "Deadwood") advises that he'll stay undercover as an additional grease monkey (whom no one will notice is in the pit during actual races?). Gunner (Jacob Vargas, "Bobby," "Are We Done Yet?") explains the workings of the tanked up Mustang and nervous, nerdy Lists (Frederick Koehler, "Domino") spouts statistics. On the day of Stage 1 of the race, in which a good third of the field will be wiped out, Jensen receives his navigator, Case (Natalie Martinez, TV's "Saints and Sinners"), one of a squad of female inmates shipped in to provide the telecast with its bodacious babes. Case provides the exposition that explains the videogame-like racetrack, on which lit plates can be ridden over to engage a vehicle's arms (swords), its defense systems (shields) or to throw up a nasty spiked obstacle (deathheads) for those driving behind. All of this, of course, can also be controlled by Hennessey, who has other tricks up her sleeve to goose her ratings. Before Stage 3 rolls around, Jensen will have discovered Hennessey's duplicity and formed an uneasy alliance with Frank's biggest rival to give the audience something she hadn't reckoned on. There's no real acting to speak of in "Death Race." Statham flexes his biceps and glowers, Allen turns on her inner ice queen (and has one truly ludicrous expletive-laced speech near film's end) and McShane maintains an ironic remove. Tyrese Gibson ("Transformers"), perhaps cast for his "Fast" and "Furious" past, doesn't convince as Mad Maxian hell driver Machine Gun Joe, accused of homosexuality by Gunner because of his predilection for going through multiple male navigators during the race. Where's Danny Trejo when you need him? Anderson's story is a mashup of Corman's original, apocalyptic corrupt prison warden movies like "Escape from New York," and videogame adaptations. It is ultra violent in all the expected ways. Editor Niven Howie ("Glastonbury," "Resident Evil: Extinction") does the usual quick cut action scenes while giving the audience a fighting chance to figure out what's going on. Original music by former Tangerine Dreamer Paul Haslinger ("Shoot 'Em Up") sounds reminiscent of the theme from Showtime's "Masters of Horror" series. "Death Race" is nothing special, but it's not terrible either. It should give fans of the genre just what they're looking for.