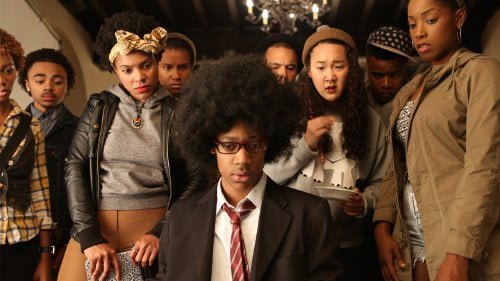 At Winchester University, the white student body is learning about black culture through the undercover reporting of Lionel Higgins (Tyler James Williams, TV's 'Everybody Hates Chris'), a gay sci-fi geek ill suited to the task. Meanwhile, the radical newly elected head of Armstrong Parker House, Samantha White (Tessa Thompson), is fighting to rescind the diversification of her campus residence. She expresses her strongly held views on her caustic radio show, "Dear White People."

If Spike Lee's "School Daze" were set at an interracial Ivy League college, then crossed with his racial satire "Bamboozled," it might look a little like writer/director Justin Simien's Sundance hit. In trying to address the discomfort he felt as a minority seeking higher education, Simien's concocted a comedy where college types (the over-achieving legacy student, the radical, the status symbol cliquer, the loner oddball) appear more than cliches because of the racial lines they attempt to balance on, cross or erase. The film isn't as funny as it could be, largely because Simien's tone isn't as fueled by anger as Lee's films, but when he scores, it's often a bullseye. Take, for example, Lionel's confused reaction to Sam's Tip Test. There are three choices as to how to respond to a waitress who takes forty minutes to serve a sandwich, haven mistaken you for a black customer who didn't tip. One can become outraged and tip per the service, show one's magnanimity by considering her low wages and tipping 15% or prove one's superiority by over tipping. The accompanying answer chart categorizes her fellow black students in mystifying slang, amusingly defined. While Sam sends out aural memos ('Dear White People, your black friend requirement has been upped to two and your drug dealer doesn't count'), Coco Conners (Teyonah Parris, AMC's 'Mad Men') takes to the web in her blue contact lenses incensed that a white woman asked if her hair was 'weaved.' Coco, who aspires to the traditionally rich, white campus house, catches the eye of Sam's ex, Troy Fairbanks (Brandon P. Bell), son of the university’s dean (Dennis Haysbert), currently dating the university president's white daughter, Sofia. Sam is also challenged by Kurt Fletcher (Kyle Gallner, "A Nightmare on Elm Street"), Sofia's brother and the editor of Pastiche, the magazine that surreptitiously hired Lionel, who believes he has every right to eat at her campus house and agrees with her accusations about racism in America by declaring outrage that he lives in a country where "Big Momma's House 3" exists. Simien pokes fun at the blacks who aspire to be WASPs and the whites who embrace black culture, but everything comes to a head at a Halloween party whose invite demands 'releasing one's inner Negro.' As Sam and Lionel arrive reporting for dueling outlets, something startling happens and it's not just the ensuing melee dubbed a race riot on news stations across the country. Simien's film can feel too restrained at times, and yet he often scores with subtlety. Take his choice of 'Swan Lake' as the musical accompaniment to Lionel's observations of white and black students interacting separately on the school lawn. (Pastiche's rival paper is Ebony and Ivy.) His closure is lovely, Sam professing her love for the white boyfriend, Gabe (Justin Dobies), she's tried to deny, as she realizes the hurt she caused her white father as a child. Closing credits rebroach his theme with real newspaper headlines documenting racially themed college parties just like the one he thought he made up. "Dear White People" isn't just a movie, it's a conversation worth having.