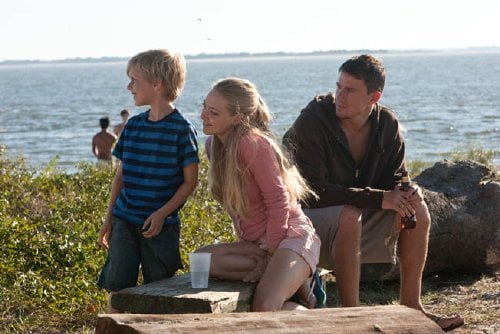 Special Ops soldier John Tyree (Channing Tatum, "Step Up," "Public Enemies") is home on leave when he meets the beautiful and charitable Savannah Curtis (Amanda Seyfried, "Mamma Mia!," "Jennifer's Body"). In the two weeks before he returns to service and she leaves for school they fall deeply in love. Savannah begs her taciturn young man to 'tell her everything,' but eventually their passionate exchange of letters drops away until one day Savannah writes "Dear John."

Remember when Swedish director Lasse Hallström used to make interesting films like "What's Eating Gilbert Grape?" He left the 90's with a literary adaptation, John Irving's "The Cider House Rules," but began the 2000's with the far less successful adaptation, "The Shipping News." Since then, he's been more a director for hire than a man with his own voice, but at least "The Hoax" and "Cassanova" had some spark to them. His direction of Jamie Linden's ("We Are Marshall") adaptation of a Nicholas Sparks (!) novel borders on lethargy. Then again, Sparks has created such a formula for himself, it must be difficult to work up any energy. Call this one "The Notebook" with 9/11, autism and less passion. After a 'meet cute' where John rescues Savannah's bag that's fallen into a pier much to the chagrin of her (apparently unwanted) male friend, the two bond over a neighborhood cookout at the beach. When autistic youngster Alan, a favorite of Savannah's, immediately accepts John, that seems to seal the deal. After a date at a local seafood shack, Savannah sees signs of a rough past in John (he's challenged at the restaurant and tells her an old scar is from a knife fight), but is only further intrigued and insists on meeting the dad who brought him up singlehandedly. Mr. Tyree (Richard Jenkins, "The Visitor," "Burn After Reading") is even quieter than his son, totally wrapped up in his coin collection, and we immediately know he has similar challenges as Alan, but Savannah has the golden touch and engages him. When she later refers to John's dad as challenged, however, he reacts badly and gets into a fist fight that leaves Alan's dad Tim (Henry Thomas, "E.T.," "I Capture the Castle") with a black eye. A simple love declaration, delivered on Tim's electric bill the next day, fixes things before the two must say goodbye. The letters begin, with John unable to tell Savannah where he is, and the relationship progresses, but just before John has a weekend off, 9/11 strikes and his unit vow to decide whether they are all in to re up the following Monday. John travels all the way home to beg Savannah's help with his decision. The letter writing starts up again, but after a while Savannah's letters stop until one last one John does not want to receive. While the mostly female audience at the screening I attended appeared to be aghast at what follows, it struck me as all too obvious. All one has to be is familiar with other adaptations of Sparks' oeuvre - "Message in a Bottle" (letters, the ocean, death), "A Walk to Remember" (young love, a single dad, cancer), "The Notebook" (poor troubled young man and young woman with wealthy parents, young love separated by a second man, house building) and even "Nights in Rodanthe" (letter writing, the ocean, death). Despite one tasteful lovemaking scene, Hallström has dialed things down so much one could drift off to sleep in the film's midsection, even though the cast mostly comes through for him. The biggest surprise is Tatum, who does a fine job as the troubled young man confused by his girlfriend's actions. His dawning awareness of his dad's condition after it is plunked in front of him is nicely handled and, of course, the Oscar nominated Jenkins is unflashy yet touching as his dad. Seyfried mostly has to act saintly and look beautiful. The role does nothing to let her spread her wings, although she does get to sing. Thomas has an odd, timid quality, like a man who is afraid of the world, that somehow suits his character and, in a small role, Keith Robinson ("Dreamgirls," "This Christmas") has a kind gravitas as John's captain. With "The Notebook" being at the top of its class for unabashed weepies, "Dear John" is a second tier effort that occasionally pays off because of the actors, but the film is so quiet, so lacking in strong passion, it could be accused of narcolepsy.