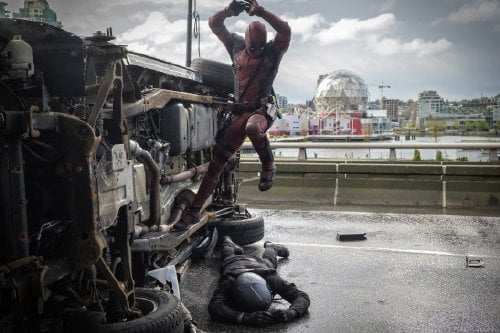 Tactically-trained ex-mercenary Wade Wilson (Ryan Reynolds) calls himself 'a bad guy who f#%&s up worse guys for money.' He hangs out at his buddy Weasel's (T.J. Miller, HBO's 'Silicon Valley') Sister Margaret’s Home for Wayward Girls drinking BJs. There he meets Vanessa (Morena Baccarin, "Spy") and after engaging in a game of childhood abuse onemanship, they realize they are made for each other. But after Wade finds out he has late stage cancer, he volunteers for Ajax's (Ed Skrein, "The Transporter Refueled") WeaponX workshop where a cure comes with a horrible price that transforms him into "Deadpool."

This R-rated, pop culture riffing, wisecracking subversive antihero is a hell of a lot of fun to hang out with, which is a good thing because the jokes fly so fast and furiously you'll probably have to watch "Deadpool" multiple times to catch them all. As written by "Zombieland's" Rhett Reese & Paul Wernick and directed by animator Tim Miller (he did the opening credit sequence for Fincher's "The Girl with the Dragon Tattoo"), "Deadpool" plays like "Ant-Man" crossed with "John Wick" with a little "Hostel" thrown in for good measure. Ryan Reynolds, sporting a buff bod and disfiguring prosthetics, has found his franchise (he played the character once before, muted beyond recognition from this rendition, in "X-Men Origins: Wolverine"). You'll already be in stitches during the film's opening credits which advise us it was 'Produced by Asshats' during a slo-mo freeze frame action scene where Green Lantern bubblegum cards and Hello Kitty accessories fly out of the combatants' pockets. 'Whose balls did I have to fondle to get my own movie?' Deadpool asks of us, before informing us that what this really is is a love story. Jumping back in time, Wade's put out when he realizes that Weasel's bet on him for Wayward Girls's dead pool, the game that will eventually supply his name. Then he meets Vanessa, his irreverent soulmate. A holiday montage set to Neil Sedaka's 'Calendar Girl' is evidence of their blossoming relationship, quickly followed by ring pop proposal. But after Wade gets his dismal prognosis, he responds to the calling card of 'Agent Smith' (Jed Rees, "Lake Placid," "Galaxy Quest") in order to remain with his lady love. What he doesn't realize is that he'll be subjected to the most unbearable tortures by the sadistic Ajax and his henchwoman Angel Dust (Gina Carano, "Haywire"), emerging with super powers but a face that Weasel describes as Freddy Krueger having face-f#%&ed a topographical map of Utah. After trying on names for size, the newly anointed, red-suited, katana wielding Deadpool is intent on revenge and making fun of Ajax's real name, Francis, is one of his happiest pursuits. Reynolds, who showcased a fine flair for offbeat comedy in "The Voices," is fleet on his feet and lives up to the 'Merc with the mouth' moniker. Despite their unsentimental onscreen courtship, Reynolds and Baccarin whip up a genuine romantic bond that fuels the story. The villains of the piece aren't particularly interesting, but Deadpool's got a great support team in Miller's barb-trading Weasel, the CGI created X-Man Colossus (voice of Stefan Kapicic, "Big Miracle"), sullen teen/human weapon Negasonic Teenage Warhead (Brianna Hildebrand), taxi driver Dopinder (Karan Soni, "Safety Not Guaranteed") and crusty homemaking roommate Blind Al (Leslie Uggams). Stan Lee cameos as a strip club emcee. You've got to appreciate a script that makes a joke of counting bullets and comments on its own production, but your mileage may vary depending on your tolerance for bro snark. Tim Miller's made a solid leap into feature film directing. Junkie XL's propulsive, electronic score is accompanied by such tunes as Salt-N-Pepa's 'Shoop,' Juice Newton's 'Angel of the Morning' and Deadpool's favorite Wham! number, 'Careless Whisper.' Stick around for the post credit bumper and you'll be made fun of for having done so. Grade: