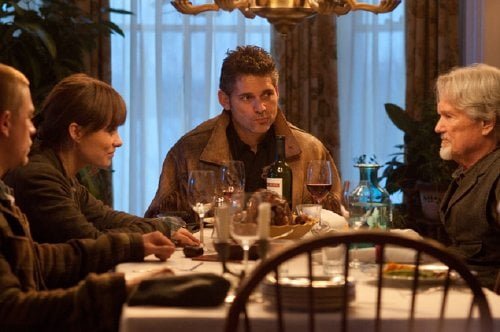 Thanksgiving is the holiday which celebrates family, but when the families of casino thieving brother and sister Addison (Eric Bana, "Munich," "Hanna") and Liza (Olivia Wilde, "TRON: Legacy," "The Words") connect with those of a rural valley's ex and current Sheriff's, the shifting nature of relationships erupt in violence in "Deadfall."

A director with an odd filmography, Stefan Ruzowitzky ("Anatomy," "The Counterfeitors"), tackles the first published screenplay of Zach Dean with quite the varied cast, but the best that can be said for "Deadfall" is that director of photography Shane Hurlbut ("We Are Marshall," "Act of Valor") creates mood with the beautiful snowy landscape, better at developing this nonhuman character than the director has with his actors. There's the germ of a good idea in Dean's screenplay, exploding the myth of the perfect American family within a Thanksgiving thriller, but the film blows suspension of disbelief by too many implausible acts and ill conceived dialogue. For the longest time, Eric Bana in the cast was a film's bad omen, but he's not bad here because it appears he's passed that distinction to his costar Wilde. The film begins with Addison's getaway vehicle encountering a deer which costs the siblings both their driver and vehicle. And Ruzowitzky gives us the film's first 'what the?' moment when the duo struggle out of the vehicle and clamber up a snowy hill only to have Addison go right back down to get their money. Addison, who sees himself as his sister's heroic protector since their bad childhood, decides they should split up and head for the Canadian border, where they will meet again. Meanwhile, former Olympic champion boxer Jay (Charlie Hunnam, "Nicholas Nickleby," TV's 'Sons of Anarchy') calls him to mom June (Sissy Spacek) and dad Chet (Kris Kristofferson, "Dolphin Tale") and it's clear the former is more delighted than the latter. On his way home, he'll pick up Liza and the two will quickly become attached. At his hometown police station, Sheriff Becker (Treat Williams, "Prince of the City," "127 Hours") keeps treating his deputy daughter Hanna (Kate Mara, "We Are Marshall," "127 Hours") like a girl who can do no right (the film's most laughable moment among many is when he asks her what she'd do in the field if she had to change her tampon). These six people all end up down in the valley where Addison hold's Chet's family hostage along with Hanna who stopped in to check up on them. Hanna struggles with her identity as her brother's emotional hostage and her new lover. Jay manages to punch Addison in the face while chained to the table, then pulls more unbelievable derring do. Becker arrives just in time to prove how much more qualified his daughter is than he. "Deadfall" wastes a (mostly) good cast by putting them into ridiculous situations with emotions either running too high or not at all. The film's saving grace is its lovely, atmospheric visuals.