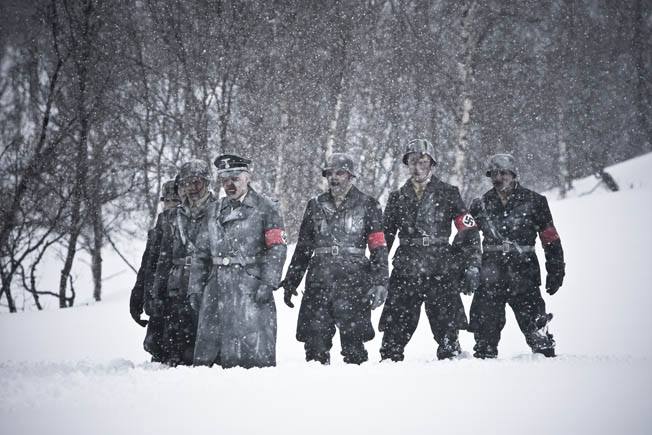 A group of medical students head off into the wilds of Norway for an Easter vacation of fun in the snow, drinking and, hopefully, sex. During their frolicking, the group is visited by an intense, middle-aged wanderer (Bjorn Sundquist) at their remote, isolated cabin. He tells them the story of Nazi brutality inflicted on the locals over 60 years ago. The legend, he says, brought a horrible end to the fanatical fascists at the hands of the townsfolk, but this is just the beginning of the terror the friends will face in “Dead Snow.”

Writer/director Tommy Wirkola sure had a good idea - Nazi zombies! - and even though his film starts like an homage to every film that has a group of young people traveling to a remote location without cell phone coverage and ends like a love affair with Sam Raimi's "Evil Dead" movies, I never expected to learn how to survive an avalanche using spit or snot. The film would have benefited immensely had it anchored its high concept to history a bit more strongly. True, we get an old man's cautionary tale (itself a genre cliche) of what happened during WWII, but some flash backs would have given the return of Colonel Herzog's (Ørjan Gamst) gang a bit more punch. Still, the film is pretty hilarious if you're into self-amputation by chainsaw and snowmobiles as zombie weaponry.

A Norwegian Nazi-zombie movie that puts the lives of a group of friends at risk during their outing to their remote cabin/tent/motel room (pick one and plug it in). “Evil Dead,” “Friday the 13th” and other horror films used this device (sometimes to death) but writer-director Tommy Wirkola gives the hoary premise a fresh face (except for the zombies). It takes a while to get rolling but as things ramp up black humor kicks in and things turn to zombie camp. As usual, the heroes and heroines are decimated one by one but they wreak their havoc, too, as they fight back. It is a battle of wills between the living and the dead and, if you are a horror gore fan, this is a film for you. Wirkola borrows heavily from the aforementioned flicks but it is more than derivative copycatting. It is really homage to the genre and, especially, Sam Raimi’s “Evil Dead” movies. In the end, “dead Snow” is a fun, Nazi-zombie horror flick that will likely find a home in the hearts of the fans.