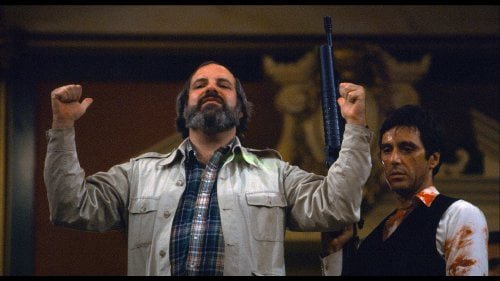 In 1958, I saw "Vertigo," one of the two filmmakers most associated with the Master of Suspense tells us, beginning a cinematic journey spanning over five decades. Over the course of a week in 2010, directors Noah Baumbach ("While We're Young") and Jake Paltrow interviewed a man whose career has veered all over the map, from countercultural to commercial blockbuster to independent, all while, with few notable exceptions, remaining true to himself. You don't have to be a fan to luxuriate in the anecdotes and expertise of Brian "De Palma."

Simply put, this is a cinephile's delight. For a week in 2010, De Palma sat in Jake Paltrow's living room and talked, and talked some more, until Paltrow and Baumbach had 30 hours of interview footage (De Palma wore the same shirt throughout for continuity's sake). This has been brilliantly whittled down to under two, intercut with illustrative clips and stills, by Paltrow's editor Matt Mayer and Lauren Minnerath ("While We're Young"). This documentary is so endlessly fascinating, as De Palma talks about every aspect of filmmaking from costume to camera shots to casting, that one can only hope at least several of the hours left on the cutting room floor end up on a blu ray release. After analyzing "Vertigo," which De Palma equates to filmmaking itself, he talks about his youth, spending twelve years in a Quaker School, his father distant. Initially a physics major, his love of film drew him to Sarah Lawrence's theater department where he met a young Robert De Niro and made his first film, "The Wedding Party." The films that followed, "Greetings" and "Hi, Mom," were released into theaters and made enough money to get Hollywood's attention. At first he floundered with "Get to Know Your Rabbit," but he persevered independently with "Sisters" and "The Phantom of the Opera" until Hollywood came calling once again with "Carrie." The studio didn't realize what they had until they released it (Sissy Spacek, known then only as production designer Jack Fisk's girlfriend, fought for the role and both she and Piper Laurie were Oscar nominated. She's not his only discovery, there were many - he's the guy who put Courtney Cox in Bruce Springsteen's 'Dancing in the Dark' music video.). While he didn't achieve the heights of Steven Spielberg, George Lucas and Martin Scorsese, this was the group of filmmakers De Palma began his career with, Warner Brothers' 'youth group,' all of them offering advice on each other's projects. De Palma is quite the raconteur, telling us he remembers Spielberg being the first guy he saw with a car in his phone (home movie footage illustrates this). He has something colorful to tell us about every film he was involved in, from frustration with Cliff Robertson on "Obsession" to Sean Penn's unorthodox motivational techniques with Michael J. Fox on "Casualties of War." On the technical side, listening to him talk about the reasoning behind his much loved split screens, which later developed into his use of split diopter focus, is like a master class in filmmaking. (The documentary is a more entertaining version of the master class articles another early De Palma colleague, Paul Schrader, has been writing for Film Comment magazine.) The only subject which is given short shrift is violence against women, De Palma often criticized as a misogynist, yet he was quite willing to hire a real porn actress for "Body Double," a bold move nixed by the studio (Melanie Griffith was cast instead). There were failures of course and he speaks frankly about them, most notably "The Bonfire of the Vanities," where he caved to studio demands, and "Mission to Mars," whose visual effects frustrated him (of the many intriguing insights De Palma provides, his statement that computer generated imagery being 'preordained' has led to repetitive cliche is one of the most profound). After "Snake Eyes," De Palma decided to no longer make films in the U.S. His filmography is undeniably uneven, but after watching "De Palma," you'll want to revisit his extensive catalog. Grade:

Big Nick O’Neil is a tough street cop who is willing to bend the rules when it fits his purpose. When an empty armored car is hi-jacked – with deadly force – Nick smells a rat and begins, with his team, to investigate the seemingly nonsensical crime. Meanwhile, heist mastermind, Ray Merrimen (Pablo Schreiber), has gathered his own crack team to pull off the crime of the century and rob the Fed of millions. Screenwriter-turned-director Christian Gudegast and co-scribe Paul Scheuring craft an oft-exciting bank heist movie that is strong on action and a cat-and-mouse tale, too. The two stories run in parallel as robbers pursue their formidable hi-tech mission and Nick tries to foil the crime he cannot quite figure out. The action, as the two paths move relentlessly toward each, is frantic and deadly. At 2 hours and 20 minutes, I wondered, going in to see “Den of Thieves,’ how the filmmakers can sustain an action flick for that long. The answer is: add a sub-story where Nick is in a troubled marriage because of his ne’er-do-well ways and his wife, Debbie (Dawn Olivieri), leaves him and takes his two daughters with her. Way too much time is spent on this sentimental angst, adding nothing of worth to what should be wall-to-wall shootouts, chases and high technology crime. The cast is a real ensemble with Gerard Butler and Pablo Schreiber first among equals. You do not get to know most of the characters too well but enough so get garner your sympathy, particularly O’Shea Jackson Jr. as the apparent dupe in the caper. The action sequences are done with energy equal to the action. Despite the lagging moments, “Den of Thieves” delivers.