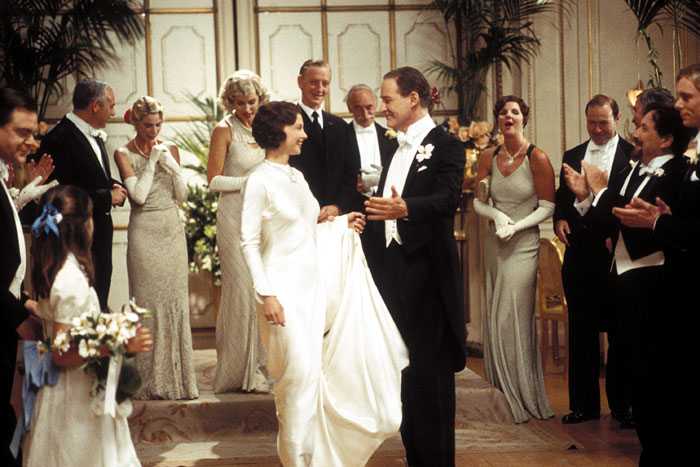 Night and day you are the one, Only you beneath the moon and under the sun, Whether near to me or far It’s no matter, darling, where you are I think of you night and day. "Night and Day," Cole Porter

When gay composer Cole Porter (Kevin Kline, "Life as a House") meets beautiful divorcee Linda Lee (Ashley Judd, "Twisted") in 1920's Paris, for a time, things are just "De-Lovely." Director Irwin Winkler ("Life as a House") and screenwriter Jay Cocks ("Gangs of New York") use director/choreographer Bob Fosse's "All That Jazz" as a template for their musical biography/love story with less charged results. Watching his life unfold via a series of musical numbers staged by fictitious producer Gabe (Jonathan Pryce, "Pirates of the Caribbean: The Curse of the Black Pearl"), the 73-year old Porter (Kevin Kline in age makeup), protests that Gabe is playing with his life. "It's my show" says Gabe as Porter becomes entranced with the sight of his youthful wife Linda. The film continues as a series of musical themed flashbacks from the fictitious show rehearsal. The 'unconventional' love story does not shy away from Porter's homosexuality, a fact acknowledged and accepted by his wife until indiscretion threatens. After a fairy tale wedding in Paris (the film's first celebrity singer, Robbie Williams, sings “It’s De-lovely”), the couple move to a life of luxurious decadence in Venice (Elvis Costello performs "Let's Misbehave" at a costume party). Just as Cole's romance with a Russian ballet star (Edward Baker-Duly as Boris Kochno) heats up, Linda orchestrates a visit with Irving Berlin (Keith Allen, "24 Hour Party People"), who recruits Porter for a Broadway musical. 1928's "Let's Do It, Let's Fall in Love" (starring Alanis Morrissette) became Porter's first Broadway success, followed by a string of smashes throughout the 1930s. Wife Linda begins a ritual of presenting Cole with a Cartier cigarette case on opening night, but Cole begins to drift again, tempted by Monty Woolley (Allan Corduner, "Topsy-Turvy") into assignations with a string of young men. Cole is unjustifiably peeved when Linda fails to appear for one opening, but she arrives late - with news of a miscarriage. This turn of events prompts a move to Hollywood, where Cole has been lured by 'I don't want clever' L. B. Mayer (Peter Polycarpou, "Evita"). Hollywood proves less than a fresh start for the couple as Cole brazenly steps into a thriving gay underground guided by new acquaintance Bobby Reed (Kevin McKidd, "Nicholas Nickleby"). Cole accepts Reed's eventual blackmailing, but Linda, who has already retreated to the Southwest for her health, moves back to Paris, disgusted with Cole's predicament. When Cole suffers a crippling horse riding injury, she returns and gives him the will to keep working, but when he enjoys his biggest hit, "Kiss Me Kate," Linda is already on her deathbed. "De-Lovely" is an ambitious concept that glides and dips but rarely soars. Kline fleshes out Porter's two-sided nature, making devotion to his wife believably coexist with his gay lifestyle. The actor's success is made murky by a scripted reflection on the song "True Love," when Porter remarks that 'it doesn't sound like me, but she thinks it does,' without offering any further evidence of Linda's misconception of her husband's character. Kline alone provides the film with any of its non-musical energy, particularly in the film's best scene where he talks his new show's star through the difficulty of singing "Night and Day." The actor's marked reserve as an aged widower underlines his character's loss, just as the amputation of his leg symbolizes the loss of his spouse. It's nice to see the period-perfect looking Judd in something other than a hackneyed police thriller, but it is more difficult to see what makes Linda tick, unclear whether she thought she could change her husband's sexual nature or was merely content without sexual passion. One of the film's biggest downfalls is its failure to develop supporting players - even the famous ones are vaguely defined. We're told that Gerald (Kevin McNally, "Pirates of the Caribbean: The Curse of the Black Pearl") and Sara Murphy - (Sandra Nelson, "Life as a House") were the Porters' best friends and the loss of one of their children is treated as a climactic moment in the Porter's lives, but McNally and Nelson may as well be extras. The musical numbers are well done. Besides those already mentioned, we get Sheryl Crow's version of "Begin the Beguine" and a beguiling reading of "Love for Sale" by Vivian Green at a Hollywood gay club. Other performers include Diana Krall, Simply Red's Mick Hucknall and Natalie Cole The production is stunning, designed (Eve Stewart, "Topsy-Turvy") like an old style Hollywood movie. Roses, Linda's symbol, are so abundant and lush you can almost feel their texture and smell their aroma. Costume designer Janty Yates ("Gladiator") meets the challenge of dressing two characters know as real style setters. While "De-Lovely" isn't entirely successful, it does celebrate Porter's music and successfully alternative marital partnership. It exits with a melancholy rendition of “In the Still of the Night,” sung together by the youthful Judd and aged Kline.

The marvelous music of Cole Porter has been a staple for the standards that have been sung by countless performers for well over half a century. The composer/song-writer’s life was last brought to life on the movie screen in the 1946 “Night and Day” (starring Cary Grant and Alexis Smith) but the world is a different place and we get a very different look at this talented man, his life and loves in “De-Lovely.” This biographical tome has all of the makings to be a great film and pay homage to a gifted musical force. You have, first of all, the ever-talented Kevin Kline (playing Porter, here) who rarely makes a false move in his career and is a versatile actor on many levels. Then, there is the litany of terrific music that came from the mind of Cole Porter, music that has resonated for decades – “Begin the Beguine, “I Get a Kick Out of You,” “In the Still of the Night,” “It’s De-Lovely,” “Let’s Misbehave” and more are used to show the man’s incredible ability. And, there is the who’s-who list of current pop notables who flocked to do the music of the man – Elvis Costello, Sheryl Crow, Alanis Morissette, Natalie Cole, Robbie Williams, Diana Krall and others bring new life to Porter’s great songs (and maybe a whole new audience with their fans). But all these pluses come to naught as the film unfolds in a flat, non-compelling way that had me checking the clock every ten minutes. I can’t quite put my finger on it, though. Maybe it is the musical within a musical format that has Jonathan Pryce as a Broadway director putting together a musical about the life of Cole Porter. The aging Porter joins him as they watch the younger Cole as the toast of Paris, an elegant bon vivant who lives the good life and is comfortable with the fame and attention his music brings. He meets Linda Lee (Ashley Judd) at a swanky party and is taken with her intelligence and charm. They wed and settle into a mostly chaste marriage as Cole seeks out same sex lovers, produces smash hit musicals and copes with the couple’s ailments. The pieces are all here to make a good musical film. The costumes and sets are lush and gorgeous. The cast, led by Kline and Judd, are good looking and have a lot of talent. The music and performances are second to none. But, in the end, I found that I simply didn’t care. The script, by Jay Cocks, and directed by Irwin Winkler, never gets beyond the two-dimensional definition of the characters. Rather than seeing the life of a complex, talented man, we get a series of elegant episodes that showcase costumes and set but leave the actors to be stick figures. As much as I wanted to (I’m a big Kline fan) I could never get my arms around his Cole Porter and I did not really care about the man or the icon he has become. This is a shame because I have a great respect and appreciation for his music. The film is, without a doubt, a stylish, well-crafted piece of work and is very clever with its story within a story frame. But, I think the stylishness and cleverness call too much attention and leave the players with little to do. It is good to see Ashley Judd in a role other than as a femme cop hunting a serial killer. “De-Lovely” is a very good looking but woodenly executed film that will need to rely on its copious music to help it garner any box-office. That is certainly the biggest draw for me but not enough to recommend the film.