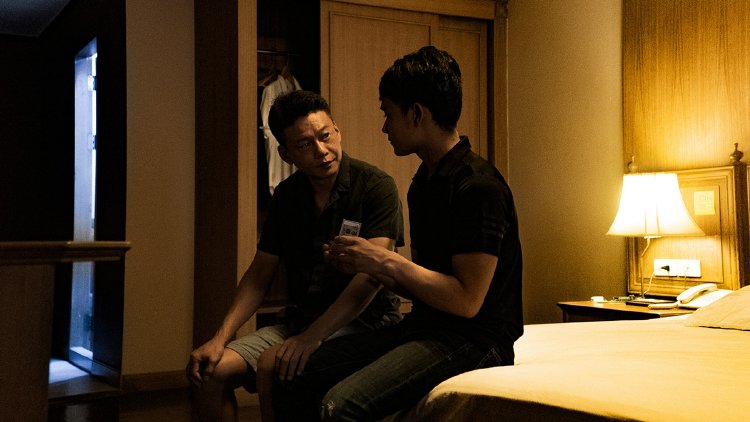 Kang (Lee Kang-sheng, "What Time Is It There?") sits, staring out at a monsoon’s lashing.  Non (Anong Houngheuangsy) makes elaborate preparations for his evening meal, adjusting pots over open flames and scrupulously rinsing produce and seafood.  Until these men meet in a hotel room, their lives consist of the banal passage of “Days.”

We begin to realize that Kang, who never smiles, is a tourist seeking comfort for an unspecified malady.  After watching him silently soak, we witness him undergoing what at first appears to be a massage, but is revealed to be a form of electroacupuncture, a therapy that causes Kang discomfort.  This and the following scene, where Jhong Yuan follows his subject through street crowds, are the first to introduce external characters.  As Kang walks along wearing a neck brace, his hand held to his temple, only one woman bothers to give him a glance.

We next meet up with Kang in a hotel room, where he lights a cigarette before folding up most of the bedding on his king size bed. The next cut will reveal him lying naked, face down, as a younger man wearing only briefs begins to massage him.  This is Non, we realize, the younger man we’ve watched prepare his meal, visit a temple and tend to a carnival stall all without interacting with anyone.  The scene is set in soft golden hues, Non rubbing oil into the contours of Kang’s body.  His actions begin to become sexual and at first we may feel the embarrassment of intrusion into an obviously intimate moment, but once Kang turns around, we cannot help but be swept into these two men’s rapture as the hint of a smile crosses Kang’s lips.

Yes, Non was hired to be here, but Kang recognizes the moment by gifting the younger man with a music box before they share a meal together.  Then Kang is gone, Non lost in a sea of overweight Western tourists.  But the spell is not entirely broken.  Ming-liang uses no dialogue, nor any comedy here, but his slowly paced passage of time connects us to two lives amidst a sea of strangers.

For information on where to see Grasshopper Films' "Days," click here.  The film will also begin a one week run at The Brattle in Cambridge, MA on 10/1/21.