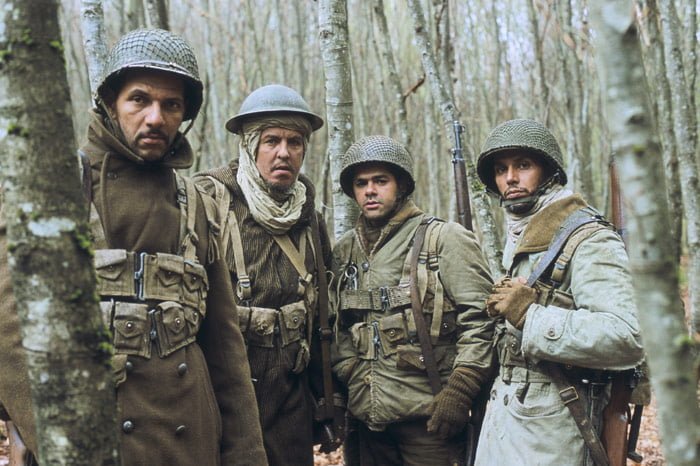 During World War Two, France called upon its colonial subjects to join the fight against its Nazi masters and save the motherland. 130000 of its “indigenous soldiers” from Algeria loyally joined the fray hoping to be treated with the same honor and respect afforded French-born soldats fighting the German Army. But, that higher regard would not come easy, if at all, in Days of Glory.”

During WWII, France conscripted its colonial citizens as soldiers but treated them as second class citizens, referring to them disparagingly as 'indigènes.' The 2006 Algerian Foreign Language Film Nominee takes a look at four of these men and their different ways of coping with their situations in cowriter (with Olivier Lorelle)/director Rachid Bouchareb's "Days of Glory (Indigènes)." "Days of Glory" is one of those rare feature films that has actually effected social change. When invited to see the film, France's president Jacques Chirac became determined to right a serious injustice and did so twice. The pensions of foreign soldiers, which had been 20% of what the French received, were brought into line with French veterans. Those pensions which had been cut off when colonial countries achieved independence were reinstated. The film itself is a good, solid war film which follows a familiar arc. Men from different walks of life are introduced and become members of the same squad. Here they are naive Said (Colin Farrell lookalike Jamel Debbouze, "Amelie," "She Hate Me"), a peasant who leaves his mother weeping that should would rather live in poverty than lose her boy. Yassir (Samy Naceri, "The Nest," "The Code") plans to profit economically from his forced employment while Messaoud (Roschdy Zem, "36 Quai des Orfèvres," "Le Petit Lieutenant") profits with the French women denied him in his home country. Abdelkader (Sami Bouajila, "The Adventures of Felix," "Embrassez qui vous voudrez") is an unusual example of a foreign officer, having tested his way to corporal status. From 1943 Algeria to Morocco, the men are trained and treated roughly by Sergeant Martinez (Bernard Blancan) and in 1944 their fighting prowess is first tested in Italy. Abdelkader freezes initially but becomes a leader. Said is saved by Martinez and becomes a sort of mascot when he goes to thank the man. What begins as Abdelkader's meek protest when Said is beaten for his poor performance at camp escalates into outright rebellion when the African soldiers are denied the fresh tomatoes served to the French. We witness one right after another being denied - the right to learn to read and write is ignored, leave is given sparingly, entertainment is culturally geared only towards the French. Slowly, Martinez is brought around to his men's side, but he has a secret he is desperate to hide. Messaoud is astonished when, after arriving in Provence, the beautiful Irène (Aurélie Eltvedt) not only takes him to her bed but promises to wait for him, yet the lovers are kept apart by French authorities who refuse to help her and censor his letters. And yet these men fight bravely. When they reach the Vosges and are showered with Nazi propaganda flyers that promise them equality, they become even more determined to squelch the enemy. They are chosen for a dangerous mission which will find them the first to reach Alsace and are promised that they will be watched, rewards implied for their heroism. It all ends tragically, of course, not only in battle but in a heartbreaking modern day coda. Debbouze and Blancan are standouts in the ensemble, beginning as opposites even as they share humble and cultural origins. Their relationship is organic and their pairing effective. Also touching is Roschdy Zem as the gallant soldier thrilled with his romantic fortune. Bouajila underplays his role, perhaps in an attempt to suggest a more refined background. The film has a limited visual scope despite some vast battle shots, but changing locales are noted with a color palette which progresses from drab neutrals to the greens of the 'motherland' and blue gray of a final destination. A nice score, by Armand Amar ("Amen") and Khaled is subtly melancholy without ever being grandiosely manipulative. Much like Edward Zwick 1989 "Glory," which focused on the ill treatment of Black American soldiers during the Civil War, "Days of Glory" illustrates both the mistreatment of men fighting bravely besides their abusers and a more universal horror at the waste of human life. But would "Glory" have helped the Civil Rights Movement had it arrived on screens thirty-five years earlier? Given the recent rioting in Parisian suburbs, "Days of Glory" demonstrates that films which aim to educate modern audiences about historical injustices will never have an expiration date.