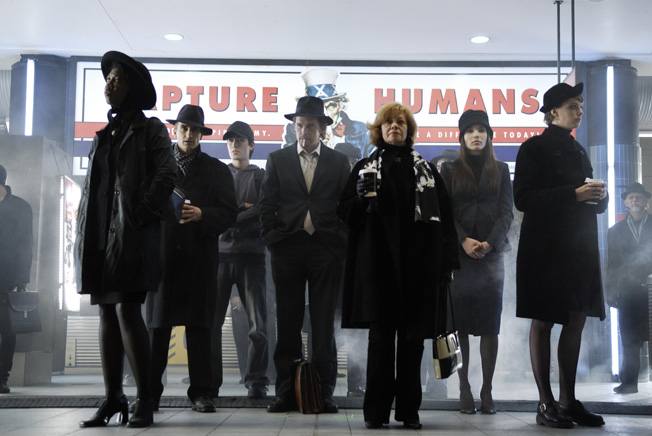 It's 2019 and only 5% of the human population remains. Bromley Markus's chief hematologist Edward Dalton (Ethan Hawke, "Before the Devil Knows You're Dead") is working on a reliable blood substitute for the new majority and is firmly against his company's sideline of farming humans for the elite. When instead he finds a cure for vampirism among the human resistance, he is surprised that his fellow beings would prefer to remain "Daybreakers."

Writing/directing brothers Michael and Peter Spierig ("Undead") return with another Australian-shot horror film that, while leaps and bounds better than their last, sucks the blood of too many other films and lacks logic when it does extend an original idea. Still, some really slick visuals and effects combined with sci-fi themes and lots of action should satisfy fans of the genre. We enter the action 10 years after 'the outbreak' in a world that bustles only in darkness. Humans who refused to 'assimilate' are now enemies of the state who are hunted, captured and farmed (in imagery that takes "Coma's" organ 'donors' gussied up with three decades of f/x technology). But natural resources are drying up (apply analogy to fuel today) and Bromley Markus CEO Charles Bromley (Sam Neill, "Skin") is pushing Dalton into live experimentation too early with disastrous results (there is a lot of 'ick' factor in "Daybreakers"). Arriving home, Dalton is surprised by younger brother Frankie (Michael Dorman), a military careerist bearing 100% human blood as a birthday gift. Edward refuses the gift and the brothers have an ideological fight right before Edward's townhouse is broken into by a bat-like 'Subsider,' which the two manage to destroy. Edward recognizes his neighborhood's former gardener. 'Subsiders' are a great idea - vampires starving from lack of human blood begin to regress into these monstrosities (Edward himself is exhibiting extended, peaked ears) who become castouts in their own society, but why are starving creatures given superhuman (or even supervamp) strength? When Edward's apartment alarm next goes off, he finds a human, Audrey Bennett (Famke Janssen lookalike Claudia Karvan, "Star Wars: Episode III - Revenge of the Sith," "$9.99"), armed with a crossbow. She's the same woman he hid from authorities with a few others after an accident and she's come seeking a vampire 'they can trust.' Driving in 'daylight mode,' another nice sci-fi/vampire touch, Edward arrives in a field to meet Lionel 'Elvis' Cormac (Willem Dafoe, "Antichrist"), a former vampire who managed to change back into a human in a most unusual way (it's a little silly within vampire lore, actually, but fits into the fuel metaphor well), but Edward's brother arrives on the scene, intent on capturing the humans. They manage to escape back to their vineyard hideout where Edward constructs a machine using a stainless steel wine vat in which he can risk his life to experiment with a 'cure.' But back at Bromley Markus, Frankie is reporting to the CEO and Edward's attempt to contact his right-hand man with 'good' news comes back to bite him. The film's opening orientation to its world is beauifully designed and shot, a world that looks like it was lit by recessed fluorescent lighting and inhabited by retro hipsters in fedoras and trench coats. Signs that night has eclipsed day and bloodsuckers are now the norm are evident in advertising and other signage. Cars are outfitted with ultra blackout windows and exterior cameras for driving during daytime and housing tracts look like something out of "A Clockwork Orange." But as Edward begins to spend more time with the humans, the sci-fi gives way to action and, except for some gore and more social 'commentary' (Bromley's daughter Alison (Isabel Lucas, "Transformers: Revenge of the Fallen"), a human resistance fighter, is televized being forced into the sun with other Subsiders), the newness wears off and the film downshifts into a bloodbath battle at headquarters, one in which the value of life is pitched out the window even as an ironic reverse plague takes effect. "Daybreakers" is yet another vampire film where there are good vampires who do not wish to drink human blood (see "Twilight,"HBO's "True Blood," TV's "The Vampire Diaries"), but the Spierig's twist is that lack of real human blood eventually starves the vamps, turning them into beastly Subsiders and creating an 'untouchable' caste for the vampires, who turn against their own. It's that same old story - when resources dry up, only the wealthy can continue to maintain a certain standard of living (see Romero's "Land of the Dead"). Politicians exist on either side of the fence ("X-Men," "True Blood" again), represented here by Audrey's vampire love interest Senator Turner (Jay Laga'aia, "Nim's Island") and nemesis Senator Westlake (Damien Garvey). The cast is fine although there are really no standouts - Hawke is perpetually determined and Dafoe almost underplays. Only Neill's villainous corporate heavy has any real conflict to play with. The writing/directing Spierig brothers show that they've learned some visual style and better storytelling chops with "Daybreakers," but it's an inconsistent mashup overall.