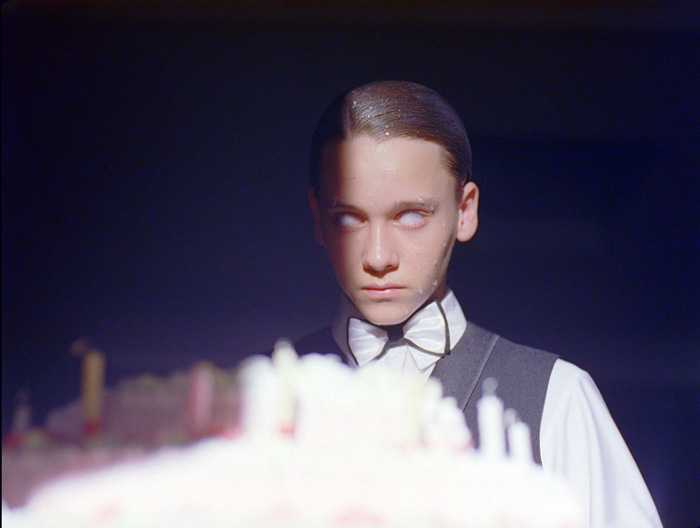 Anton (Konstantin Khabensky, "Night Watch"), a vampire of the Night Watch, looked on in dismay as his son, Yegor (Dima Martynov, "Night Watch"), turned to the dark side, becoming their Great Other. If Yegor should clash with the Light Side's Great other, a war will begin between the two sides, and she happens to be none other than Svetlana (Mariya Poroshina, "Night Watch"), Anton's partner in the "Day Watch."

"Night Watch" was a visually arresting but a dramatic rehash of vampire horror and Lord of the Rings style fantasy. Surprisingly, "Day Watch" ups the ante with preposterously entertaining plot lines and fewer mind blowing effects. Anton is between a rock and a hard place with his son and the woman he loves destined to cause the end of the truce between Light and Dark. Cursed because of his application to the Old Witch Darya (Rimma Markova, "Night Watch"), Anton is weighted with a guilt that finds him precariously balanced between two sides. When Svetlana chases a Dark one who has been sucking the blood of old women into the mosquito plagued Darkness, Anton is horrified to discover the murderer is Yegor, but when Yegor's teacher Galina (Irina Yakovleva) asks that he steal the evidence against him, Anton cannot resist the protective parental urge. But "Day Watch" is really about blowing our minds with such silliness as the Chalk of Life, guarded by a gold-faced monk, but stolen years before by the great warrior Tamerlane. The Chalk can be used to correct one's mistakes, something Tamerlane utilizes in order to steal it. There's also Geser's (Vladimir Menshov, "Night Watch") ploy to hide Anton from the Dark Ones by hiding him in the body of his lover Olga (Galina Tyunina, "Night Watch"), a neat little trick that enables some girl on girl action when Anton finally declares his love for Sveta. Zavulon (Viktor Verzhbitsky, "Night Watch") is as rock star campy as ever, but this time around, his right hand, Alisa (Zhanna Friske, "Night Watch"), gets her chance to shine with her horn shaped hair, eighties regalia and ability to drive so fast she can ride across the sides of apartment complexes. Also back is the ghoulish butcher (Valeri Zolotukhin, "Night Watch"), still trying to keep his son Kostya's (Aleksei Chadov, "Night Watch") predilection for human blood under wraps. This is an 'International' version, which means the filmmakers have had some fun with the subtitles, which bop to the beat and literally bleed off the screen. Special effects range from the awe-inspiring look of the rushing Darkness to the goofiness of a metallic paddle ball wrecking havoc at Yegor's birthday bash. Tamerlane's supernatural attack on a fortress provides the period flavor provided by the truce in the original film. Writer (adapting Sergei Lukyanenko's novel)/director Timur Bekmambetov seems more confident this time around, investing more in his story, letting the razzle dazzle complement the campy genre piece rather than defining it. There's something to be said when the big reveal of a hiding place for a piece of chalk is more emotionally satisfying than the dramatization of a young boy turning towards evil. I can't wait to see what Bekmambetov has up his sleeve for the third film.