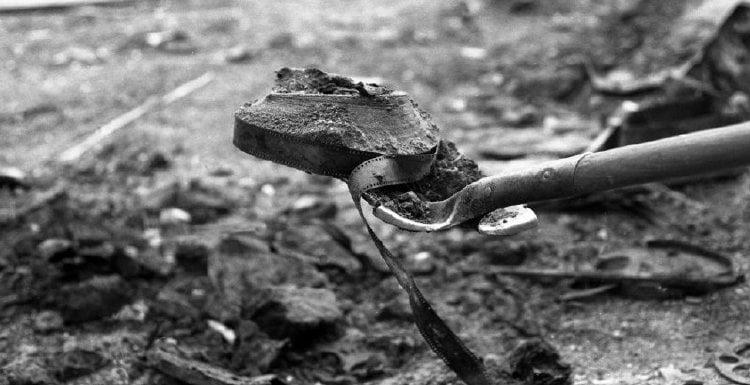 In the 1950s, a couple found 200 19th century glass-plate negatives between the walls of their cabin. They tried to reuse them for a greenhouse, but fortunately a local glazier recognized them as the work of Yukon photographer Eric Hegg. In 1978, a pastor was bulldozing behind Diamond Tooth Gertie's Gambling Hall for a new rec center when he uncovered reels of nitrate film. Specialists were called in and recovered 533 reels from 372 silents of the 1910's and 20's. Writer/director Bill Morrison ("Decasia") uses these incredible discoveries to tell the history of the town at the center of the 1896 Yukon Gold Rush in "Dawson City: Frozen Time."

Morrison's brilliantly constructed film, complemented by an eerie and edgy score by Sigur Rós collaborator and composer Alex Somers ("Captain Fantastic"), is a treat for both cinephiles and historians. Using no narration (the only sound we hear will be from a film snippet introducing 'talkies' to Dawson City and some late arriving interviews regarding the film find), Morrison's fantastical history plays like one of the silent films he's woven into his work. Watching it is almost a spiritual experience, history coming alive through flickering images of the past which almost seem made for Morrison's purposes. After a brief history of nitrate film and the many fires it caused, we turn to the area where the Klondike and Yukon rivers meet, originally a hunting and fishing camp for a native Indian tribe. After prospectors found gold in the late 1890's, Dawson City was founded with 3,500 residents in its first year. 100,000 'stampeders,' including Jack London and Eric Hegg, made their way north, but only 30,000 made it through the treacherous terrain. Fred Trump, the Donald's father, established the family fortune with a brothel along their route. As the city swelled, Dawson City's Indians were shipped five kilometers down river and with stakes gone, opportunists like Apple Jimmy made their livings off the miners. In 1899, a gold strike in Nome, Alaska, bled 75% of its residents (including Hegg, who abandoned his photography shop). By 1901, gambling and prostitution were driven out of the city, but other forms of entertainment, including cinema, continued to thrive. In 1902, the Dawson Amateur Athletic Association (DAAA) was built, becoming the residents' most beloved building with its swimming pool, ice hockey, billiards, boxing and handball. Individual miners were replaced by huge dredging machines, reducing the population, which included future infamous Hollywood director William Desmond Taylor, again. The DAAA changed hands and began showing films which were managed by the Canadian Bank of Commerce. They were only to be shown per their licensing agreement, but as Dawson City was the end of a film distribution line, they were rarely returned. After it was decided to fill in the DAAA's pool to ensure a smoother ice rink in 1929, Clifford Thomson, a bank employee, used the pool to dump the overflowing store of films (two tons of film were thrown into the river, another 400 titles burned). It was the reels thrown into that pool which were uncovered in 1978. Morrison uses graphics and newspaper articles of the time as overlay scrawls over Hegg's photographs, which are marvelous (and inspired 1957's Cannes winning short documentary, "City of Gold"), but it is the flickering images of the found film, some restored, others shown in various states of decay which make Dawson City come alive. There are films about gambling and gold which fit right into his narrative, but Morrison finds a place for everything. News reels create his dateline, most spectacularly when he is able to stitch together moving, pictorial evidence of the 1919 Black Sox Scandal. We see pieces of the Universal Screen Magazine series, "The Frog," "The Birth of a Flower" and "A Trip Through Palestine." Repeated snippets of "The Recoil" and "Polly of the Circus" had me drooling for more. By the time we learn the DAAA burned to the ground in 1937, my heart sank I'd become so attached to the old building. But so much was lost in Dawson City, its natural resources stripped by mining, its native inhabitants forced elsewhere. It is the picture of the rise and fall of a civilization. Morrison leaves us with the degraded images of a woman dancing, a ghost seen through time. "Dawson City: Frozen City" is a masterpiece. Grade: