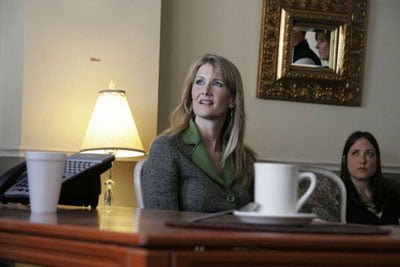 Nikki (Laura Dern, "Blue Velvet," "Wild at Heart") is thrilled to get the lead role in genius director Kingsley's (Jeremy Irons, "Casanova," HBO's "Elizabeth I") new film, but after they've begun shooting Kingsley tells Nikki and her costar Devon (Justin Theroux, "Mulholland Drive") that the producers neglected to tell them that his project is a remake of a movie that was never completed and was cursed besides - its lead actors were murdered. Nikki's reality begins to slip into that of her character and time splinters like pieces of a jigsaw puzzle in David Lynch's "Inland Empire."

Five years ago, writer/director/editor David Lynch gave us his second masterpiece, "Mulholland Drive," a dream like tale about a Hollywood actress that, given patience and a penchant for Lynch, had its own structured logic. Since then, Lynch has begun experimenting with digital video and has repeatedly made statements about the freedom the medium has given him. If that's the case, I prefer my Lynch artistically shackled by the restraints of a film camera. "Inland Empire" may send diehard Lynch fans over the moon and it does put forth many intriguing ideas and startlingly creepy visuals, but it is just plain indulgent and three hours of dream logic begin to take their toll.

"Inland Empire," which is a title more descriptive of the director's "Twin Peaks" than this Hollywood-set tale, presents themes on prostitution, movies, people good with animals, yesterday being tomorrow, brutal f*&king murder, marital infidelity, memory and identity then shuffles, plays, repeats. And then there is the giant bunny-headed people sitcom where mundane statements elicit a laugh track. After a completely weird black and white opening featuring a Polish man and prostitute with blurred out heads, the film starts promisingly. Nikki's butler (Nikki is married to a very wealthy studio executive) answers the door to a Polish woman (Grace Zabriskie, "Twin Peaks," in a mesmerizing, threatening performance) claiming to be a new neighbor. Over coffee Nikki becomes alarmed when the woman tells her strange Polish folk tales and seems to know too much about the film role she wants. Nikki asks the woman to leave, but she just keeps talking, telling her that if this were tomorrow, Nikki would be sitting 'over there.' Nikki looks and is horrified to see herself sitting on a different settee in her vast living room, and with that look Lynch transports us into tomorrow's scene.

During the film's first reading, the actors and director are startled by the sound of someone walking behind their sets ('Smitty's house, the scene of the crime) and later we see that it was Nikki herself. Devon, an apparent lady killer, is warned to stay away from his costar because of who her husband is, but soon they have fallen into an affair mirroring their movie and mirroring past events. Or is this all in Nikki's head? Nikki runs into a group of Sunset Blvd. hookers who offer advise, or is she one of them? A third personality, a pregnant woman who lives in a trashy small house with a guy who looks like Nikki's husband but isn't, evolves. This is the woman who confesses and who eventually watches herself on a movie screen, destined to repeat the actions she sees. In the end, Lynch introduces characters we've only heard about and introduces new ones, like "Mulholland Drive's" Laura Harring and someone sawing a log, a Lynchian troupe that turns "Inland Empire" into a kind of compendium of the author's work.

After utilizing the beautiful work of cinematographers Freddie Francis ("The Elephant Man," "The Straight Story") and Peter Deming ("Lost Highway," "Mulholland Drive"), Odd-Geir Sæther's digital work is often downright ugly. The picture has a yellowish cast and the hand held docu type work often employed pulls one out of Lynch's dream world. The film can be downright cheesy at times, but maybe that is Lynch's intent when he's recording nine LA hookers dancing to "The Locomotion" - who knows? At the same time, Lynch knows how to work Dern's distinctive face to his advantage and when the potential rapist she fires at acquires her eyes and toothy, screaming, squared mouth, the effect is as startling as those vibrating heads of "Lost Highway." His trademark industrial soundscape is also as effective as ever, but this time there is no Angelo Badalamenti score to accompany it.

"Inland Empire" is initially intriguing, but Lynch's roving camera and inexpensive media allow him to let his ideas sprawl all over the map. By the film's third hour this experimental effort becomes exhausting.