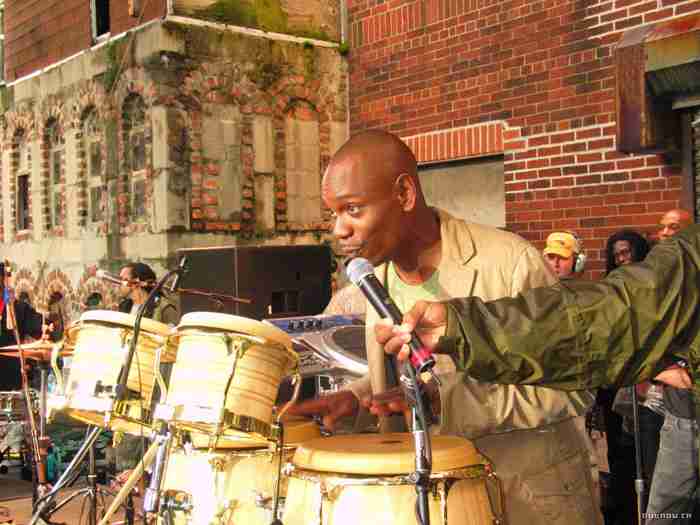 In 2004, before the craziness that became his life, comedian Dave Chappelle decided to give a little back to his fans. Cloaked in secrecy, his project brought him to his home in Ohio where he hands out golden tickets to all manner of townsfolk that will get them a round trip bus ride, overnight accommodations and an invitation to journey to Brooklyn, New York to attend Dave Chappelle’s Block Party.”

Director Michel Gondry (“Eternal Sunshine of the Spotless Mind”) comes up with a film that is more a documentary with lots of hip-hop music rather than a concert film. The first 30 minutes of “Block Party” is spent with Chappelle rounding up his fellow Ohioans, from middle-aged white folk who have never even heard hip-hop to the entire Central State University marching band, and planning the trip to the big city. Once he gets this caravan under way, the action shifts to the Bedford-Stuyvesant neighborhood in Brooklyn where concertgoers must register on-line, go to a secret spot for transport to the secret location of the big party – the intersection of Quincy and Downing Streets. Chappelle uses his humor and energy as a bridge between the songs of the extensive list of his favorite performers, including Mos Def, Talib Kweli, Dead Prez, Kanye West, Common, Erykah Badu, Jill Scott, Cody Chesnutt, John Legend, The Roots, and a reunited Fugees. While I’m not a fan of hip-hop music, the energy these players give to their music is palpable. Most of it had a sameness about it to me though I really enjoyed Lauren Hill’s rendition of the Robert Flack classic, “Killing Me Softly.” Dave Chappelle intersperses his fast-talking humor with his visits to various neighborhood locales where he gets help with his project from the director of a day care center – to use the roof to film the event – to the Salvation Army for donating furniture. Chappelle and helmer Gondry give a real neighborhood feel to “Block Party” and the result is everyone got together and had a great time. This is definitely aimed at a younger demographic than this old guy and that demo will enjoy the celebration of music.