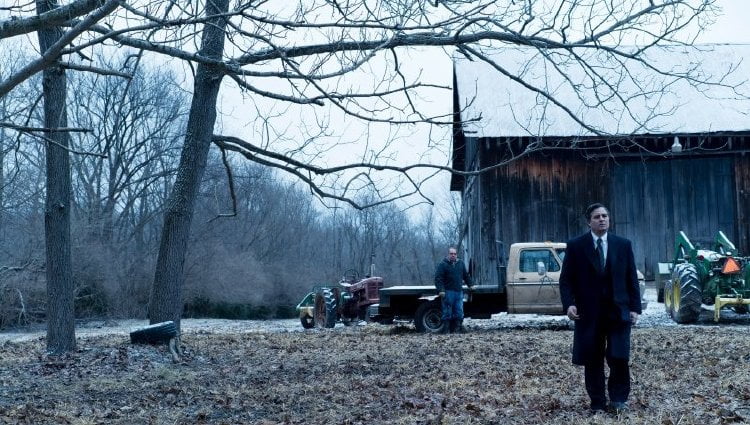 Just after he’s been made partner at Cincinnati’s Taft law firm, Robert Bilott (Mark Ruffalo) is embarrassed when he’s called out of a meeting by West Virginia farmer Wilbur Tennant (Bill Camp), referred by Robert’s grandmother. Wilbur is asking for help to prove that DuPont’s Dry Run Landfill has been poisoning his cattle. Robert tries to explain that he defends corporate chemical companies, but agrees to look into it, thinking he’ll be able to get the man quick answers from an EPA report. But once he starts nosing around, Bilott finds himself in “Dark Waters.”

Director Todd Haynes makes a radical departure from the lushly produced period films where he’s explored the personal ramifications of societal norms with this bleak investigative procedural laying bare the personal ramifications of taking on corporate America. It was Mark Ruffalo, an activist, who brought him the screenplay adapting Nathaniel Rich’s recent magazine article (by screenwriters Matthew Michael Carnahan ("World War Z") and Mario Correa) which illustrates how one committed lawyer got justice when an industry was allowed to self regulate and our own Department of Justice and Department of Health failed.

At first Wilbur Tennant almost seems comical with his ratty box full of videotapes and his heavy rural accent, but when Robert decides to take a drive out to visit ‘Grammers’ and she reminds him he’d spent many happy days at Tennant’s farm, he pays the man a visit. What he finds is shocking and Tennant himself, a man who clearly cares for his animals (including a German shepherd seen running in circles), is not only angry but in mourning, the field behind his barn a literal graveyard. As Robert drives around Parkersburg, he notices how DuPont has insinuated itself everywhere from community centers to public waste receptacles.

His easy friendship with DuPont executive Phil Donnelly (Victor Garber) explodes in public when Robert asks what the chemical compound PFOA is, the lawyer taken aback by Donnelly’s expletive laden retort. Robert’s boss Tom Terp (Tim Robbins) is beside himself over the incident but Bilott wins back his trust when he lays out his case. But years and years of pro bono litigation take their toll, Bilott’s salary slashed multiple times, the man’s health and family life also suffering. His clients too, like Joe and Darlene Kiger (Mare Winningham), become targets when they dare to sue the company which employs so many.

If you didn’t see Haynes and his usual collaborators like producer Christine Vachon and cinematographer Ed Lachmann in the opening credits, you might be hard pressed to recognize this as one of his films. Lachmann, who has captured such rich jewel tones in films like “Far From Heaven,” here gives us a world that is always on the verge of winter, one of dark interiors and gray buildings. The film uses a dateline to indicate the passage of years and some scenes seem to simply drift off. There is a plainness to the film, a meat and potatoes quality that one would never associate with its director. Ruffalo, wearing a jowl prosthetic, has a head down quality that suits his character, mountains of data and years of loss weighing heavily. As his wife, Anne Hathaway convinces as a Midwestern Catholic mother and former lawyer who deflects misogynistic comments at company events with good natured acceptance. The amusingly cast Robbins acts as a fine moral compass, his needle wavering before pointing toward justice. But it is Camp who is the heart of the film, his arc tragically traveling from anger to grief. In one of the most shocking scenes, Bilott witnesses Tennant shooting one of his last cows as it prepares to charge, clearly mad, the man apologizing to it through tears for what he had to do.

It is only a matter of time before Bilott connects DuPont’s criminal acts to human disease and death and the filmmakers have cast one of the infants born to a DuPont employee with a missing nostril and eye deformation, as an adult the lawyer encounters in Parkersburg. “Dark Waters” is an infuriating, damning example of corporate irresponsibility and capitalism run maliciously amok.