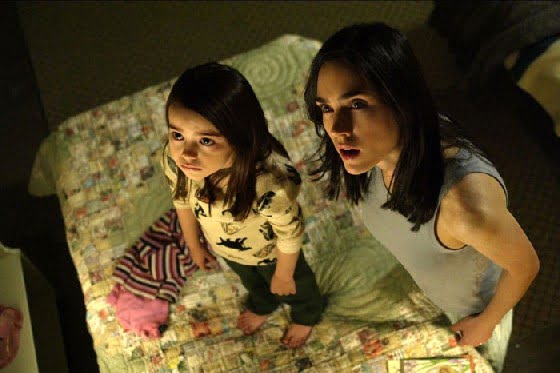 Dahlia (Jennifer Connelly) is a troubled young woman plagued with migraine headaches, a messy divorce and a battle with her ex, Kyle (Dougray Scott), for custody of their daughter, Ceci (Ariel Gade). To cut costs, she and Ceci leave their Manhattan apartment for cheaper digs on New York’s Roosevelt Island. Fast-talking realtor, Mr. Murray (John C. Reilly), convinces Dahlia to take a sinister looking apartment with a bad history in “Dark Water.”

Dahlia (Jennifer Connelly, "House of Sand and Fog") is struggling to establish herself as a single mom to her young daughter Ceci (Ariel Gade, "Envy"). She's divorcing husband Kyle (Dougray Scott, "Ever After," "Ripley's Game") for cheating on her and fighting over Ceci's custody while her own childhood abandonment by her alcoholic mother (Elina Löwensohn, "Nadja," "A Very Long Engagement") still haunts her. Dahlia's decision to take an apartment on Roosevelt Island when Kyle's in Jersey City angers him to lawsuit level, but she's got worse things to worry about when her new home takes on "Dark Water." It's hard to resist sure-to-be-cliched adjectives like soggy and waterlogged when describing this film. As adapted by Rafael Yglesias ("From Hell") from Hideo Nakata's ("Ringu") original film (itself from the Kôji Suzuki novel), not only do we get such standard Hollywood tripe as the go-nowhere red herrings and fake-out scare tactics, but the J-horror genre itself seems to be drying up. How many more wet little girls and children endangered in bathtubs can we take? After some tense mediation, Dahlia takes Ceci across on the Tramway to meet Mr. Murray (John C. Reilly, "Criminal," "The Aviator") about a $900 rental. Ceci hates everything about Roosevelt Island and the building's lobby until she becomes transfixed by a ceiling leak in 'her' bedroom (Murray distracts Dahlia's notice). Dahlia's frantic when Ceci is found on the unlocked rooftop gazing at a water tank, not pleased with either the unit or the building's security, but Ceci now loves the place and has been promised the Hello Kitty backpack she found by the super, Veeck (Pete Postlethwaite, "Among Giants," "The Shipping News"), if the owner does not claim it within a week. As the local school has a great reputation and is only two blocks away, Dahlia gives Murray a deposit on the spot. Of course, as soon as they move in that leak grows ever more bizarre and Ceci begins to talk about an imaginary friend, Natasha (Perla Haney-Jardine, "Kill Bill: Vol. 2," doing double duty as the younger Dahlia in flashbacks). Murray and Veeck play good cop, bad cop, the abandoned unit above Dahlia's mysteriously keeps flooding, a couple of resident teens keep threatening and Kyle's lawyers accuse Dahlia of being mentally fit - is this all in her head? There are two or three decent elements to "Dark Water," all in the supporting cast. John C. Reilly can add his Murray to the developing sub genre of hilarious real estate agents in horror films (see "The Ring Two," "The Amityville Horror"). 'You can smell the river!' he exclaims, as if that's a selling point. Reilly does great used car salesman. Next up is Tim Roth ("Invincible," "The Beautiful Country") as the intriguingly conceived character of Dahlia's lawyer, a chauffeur who lives and conducts business from his vehicle while putting up a family front. Postlethwaite, whose career seems to have gone into decline as Jim Broadbent's has gathered steam, gives Veeck a nice undercurrent of menace, but director Walter Salles ("Central Station," "The Motorcycle Diaries") incorporates it too subtly in spots (Veeck's request for a 'reward' is just as likely to go over the audience's head as it is Dahlia's). Camryn Manheim ("Scary Movie 3") is a nice island of maternal sanity amidst the crazies. Jennifer Connelly is a good and stunning actress, but it is becoming a bit odd that she continually chooses dark roles as scorned women. Dahlia's emotional conflict isn't really all that interesting and Connelly doesn't make it any more compelling. Salles plays up the water angle to the nth degree - Dahlia's flashbacks take place in rainy Seattle, current day New York City has few dry spells, and Ceci keeps singing about Itsy Bitsy Spiders climbing up waterspouts. This does allow for cinematographer Affonso Beato ("Ghost World," "All About My Mother") to capture one breathtaking image, though, a beautifully lit overhead shot of a Manhattan street with car headlights reflected on rain-slicked streets. The film offers few scares - Salles (why did the respected Brazilian director opt to remake a Japanese horror film, anyway?) is obsessed with showing Connelly in front of an open bathroom mirror, only to have it close and reveal - nothing. There's one fairly effective image of a ghostly girl holding Dahlia's hand in an elevator, but it's upstaged by the more simple effects of a lock of hair issuing from a sink spout and that bubbling black leak. Those two teens are tied to Kyle for a brief "Gaslight"-like subplot that goes nowhere, as does Murray's panicked cover story as to why there are no children in the building or Veeck's implied sexually predatory nature. By the time "Dark Water" floats into the first of its multiple endings, you'll be ready to pull the plug on this unnecessary remake.

Brazilian filmmaker Walter Salles makes his American directing debut on the heals of his internationally acclaimed “Motorcycle Diaries” on the life changing journey by budding revolutionary, Ernesto ‘Che Guevara. His choice to make his introduction to mainstream America is the remake of the Japanese movie, “Honogurai mizu no soko kara,” from “Ringu” novelist Koji Suzuki. Unfortunately, the helmer is burdened with a story that is uneven, often unclear, not suspenseful and poorly written by Raphael Yglesias (adapting the original Japanese screenplay, by Hideo Nakata and Takashige Ichesi). Oodles of time is spent setting things up as we first see Dahlia suffering through her divorce mediation with Kyle, the custody fight for Ceci, looking through the apartment and using up almost 20 minutes of the film’s runtime. So much time, in fact, is spent on the setup of events that it is nearly an hour before anything substantial actually happens. When things do finally get rolling, it is with no originality and takes liberally from “The Shining” with an imaginary friend, dark fluids gushing everywhere – dirty water instead of blood – and moody music, by Angelo Badalamenti, to let us know something sinister is happening. Yglesias’s script is heavy handed and obvious. When far too much time is spent showing that the shower door is indestructible, you can almost see the telegraph wires to the finale. It meanders about between trying to show Dahlia’s troubled past and introducing the idea that everything is in her mind, even as ghosts and other supernatural events take place. The careless construction of the screenplay kills any suspense and is confusing with its multiple endings. Many times, even with a mediocre script, the cast can help a film be better than it deserves to be. This is not the case with dark water. Ethereal beauty Jennifer Connelly has the haunted, troubled look needed for Dahlia but the character and the story defeat the actress. John C. Reilly steals every scene he is in as the fast-talking realtor who convinces Dahlia, against her better judgment, to take the obviously doomed apartment on New York City’s Roosevelt Island. (You can tell it’s doomed because of the murky lighting, a dark and sinister stain on the ceiling and the obviously meant-to-be-suspenseful score as Dahlia inspects the place. But, hey, it’s cheap, right?) Dougray Scott merely looks pissed off all the time as he derides Dahlia and is shown, also, as a sinister figure trying to drive his ex-wife mad in a story line that goes nowhere. Pete Postlethwaite (whatever happened to him, you ask?), as the building superintendent, Mr. Veeck, is used to distract and he, too, may (or may not) be another sinister figure. Tim Roth does a fine job as Dahlia’s newly hired lawyer and even has his own subplot but this is more a distraction than a part of the story. Little Ariel Gade is nicely cast as Dahlia’s daughter, though her very dark eyes contrasts Connelly’s striking blues too much for mother/daughter. The production consists of mostly dark, gloomy apartments, lobby, laundry room and elevator but without making the building into another character. The horror of this mostly horrorless movie consists of the title water – the film should have been called Dirty Water” – gushing from every plumbing orifice available. It may be icky but it sure isn’t scary. Heck, it’s New York City, so what do you expect to come out of the faucets? Dark Water” is an inauspicious debut by Salles to his new American audience. I’m not familiar with the Japanese version but have to hope it is better than its remake.