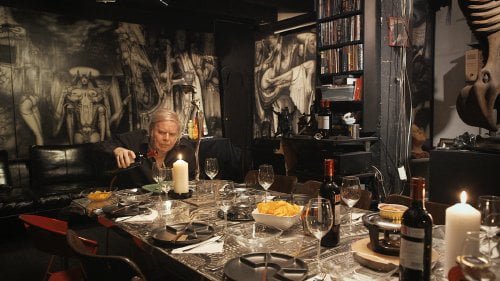 Everyone who knows the Ridley Scott movie “Alien” and its creepy creature is familiar with the artist that created the hideous monster. But, there is far more to the man’s decades long career and first-time feature documentary filmmaker Belinda Sallin brings us into the “Dark Star: H.R. Giger’s World.”

Inside an ivy covered stone house with an old wooden door one might expect a fairy tale interior. But this house is the home of a surrealist artist, perhaps best known for his Oscar winning designs for "Alien," and it is a maze of nooks and crannies full of nightmarish depictions of the cycle of life in "Dark Star: H.R. Giger's World." Writer/director Belinda Sallin's documentary about Giger was filmed during the last years of the artist's life, his mobility already curtailed, so her documentary is somewhat housebound. But what a house! It exudes his aesthetic, even spilling over into the overgrown gardens, and Sallin uses aspects of it as jumping off points. She also captures Giger at work, the sketch we see him working on signifying sex and birth within two shapes. Psychiatrist/author Stanislav Grof wanders outside expounding on his art amidst metal sculptures disappearing into nature, the 'biomechanical' element of Giger's work in practical terms. (Later, we'll see that garden also contains a child sized working train, like something out of a house of horrors amusement park.) Another interview subject says it's like Giger's channeling something and the man himself talks about the nightmares which inspire his work. In archival footage and stills, we see him with his first muse, Li Tobler, whose image is predominant in his paintings and whose suicide haunts him. We also see older footage of him working with his preferred airbrush and it is amazing the level of detail and texture he achieves - he's fascinating to watch. Giger, shuffling and speaking in a distinctive gravely voice, shows us his skull collection, telling how his oldest one so unnerved him, he pulled it across the road on a string. His earlier days were spent in an Alpine home with his pharmacist father and his supportive (and easily scared) mother, a champion of his work (the home, which Giger gave to his first wife, is visited with the filmmaker, shrouded in atmospheric mist). Giger didn't go the usual route, instead walking into a Zurich poster shop hoping to sell his art. That shop owner is one of many who still visit and collaborate. Giger's second wife Carmen talks about how he continually reinvested his earnings in his work, often just scraping by, yet he purchased the Château St. Germain in Gruyères as a museum for his collections. Still, it appears that the most fascinating stuff is to be found in his home. Long time friend and assistant Tom, a musician and fan influenced by his boss's work, is still finding things in file drawers (and speaks of the artist's generosity in supporting his own early work). Most amusingly, Tom's 'office mate' is Giger's mother-in-law, a spirited woman who keeps his books and is amused by people's reactions to her famous son-in-law. Hansruedi, as his friends and family call him, remains a bit of a mystery, Sallin and her subject insinuating more than analyzing. What was the root cause of those nightmares that he says inspired his work even before Li's suicide? Why the birth trauma? Yet his work is undeniably fascinating, having inspired science fiction writers, filmmakers and musicians, many of whom have used Giger's work on album covers. The filmmaker uses an overlapping technique with TV formatted footage to maintain a consistent aspect ratio. Her well chosen final shot is of Giger descending down a staircase into darkness. Those who enjoyed "Jodorowsky's Dune," the documentary about the unmade film that would have employed Giger's work, will find "Dark Star" an intriguing followup. Grade:

I have to admit, my familiarity to Giger’s vast body of work is isolated to the abovementioned “Alien,” so the introduction to the rest of the artist’s work is a little overwhelming. Giger’s world is one of darkness that delves into his mind where his art is based on his inner fears. But, the artist does not hide from these fears, he conquers them and they become the images that flow from his airbrush. Newcomer Sallin uses copious interviews with Giger and those closest to him and archival footage covering the life of the man. But, I have to admit, “Dark Star” is really aimed a an audience interested in Giger’s work. For the rest of us, it s interesting and educational as a good documentary should be.