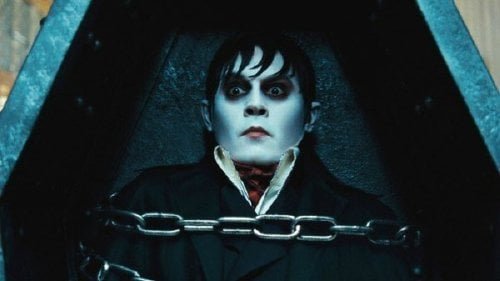 In the late 1700's Barnabas Collins (Johnny Depp) was the wealthy owner of Collinwood in the town of Collinsport, Maine, built into a fishing empire by his parents. The former playboy was happily engaged to Josette DuPres (Bella Heathcote, "In Time") when he was turned into a vampire and buried alive by the jealous witch, Angelique Bouchard (Eva Green, "Casino Royale"), a servant who wanted him for herself. Just about two hundred years later, Barnabas is unwittingly released from his tomb and is quite taken aback by the world of 1972 - and the presence of Angelique - when he emerges from the "Dark Shadows."

For their eighth collaboration, Johnny Depp was the one to suggest adapting the late 60's/early 70's supernatural soap to director Tim Burton ("Beetlejuice," "Sweeney Todd"). As they were both big fans of the show, the idea had promise, but although it starts off well, the story (screenplay by 'Pride and Prejudice and Zombies' author Seth Grahame-Smith) spirals out of control like that carousel finale in "Beetlejuice." The movie still has things to recommend it - Burton's always awesome art direction and costume, many of the performances - but overall this feels too much like Depp and Burton left to play in their own sandbox. Ironically, fans of the series seem to be the least targeted demographic (as is made evidently clear by the movie's trailer, which misrepresents it as an outright comedy) and Burton has failed to mine the comic possibilities of the 'Ed Wood' vibe that made the series' production infamous. A prologue rich in atmosphere and 1700's period detail, but featuring an insipid Justin Tracy as the 6 year-old Barnabas, sets up the family history with too many particulars, a harbinger of things to come. Then we're moved to 1972, where a young brunette renames herself Victoria Winters (Heathcote) and makes her way to Collinsport to respond to an ad for a nanny. She is now the spitting image of Barnabas's lost love and is 'greeted' at the door to the now downtrodden manor by Willie Loomis (Jackie Earle Haley, "Watchmen"), one of only two servants left (the other, Mrs. Johnson (Ray Shirley), is so old, her presence is a running joke). Vicki quickly hits it off with family matriarch Elizabeth Collins Stoddard (Michelle Pfeiffer) and is hired to care for Elizabeth's nephew, master David Collins (Gulliver McGrath, "Hugo"), haunted by his mother's death (literally, of course). David's depressed dad, Roger Collins (Jonny Lee Miller, "Trainspotting"), has his own nanny in the form of Dr. Julia Hoffman (Helena Bonham Carter), the live-in alcoholic psychiatrist. Elizabeth's own child, Carolyn (Chloë Grace Moretz, "Kick-Ass"), is in the throes of teenaged rebellion (and performs a hilariously slinky dance to Donovan’s 'Season of the Witch' when the group all first assembles for breakfast). Family established, it's time for Barnabas to reemerge, which he does when an unfortunate construction crew stumbles across his coffin and cuts through the chains which encircle it. Immediately, we get our first off note - after bloodily dispatching the workmen with an apology for his intense thirst, Barnabas stands up and cries 'Mephistopheles' - at McDonald's golden arches. In the middle of nowhere. This garnered a big laugh at a preview screening. Things pick up when he presents himself at his old home and makes a secret pact with Elizabeth after showing her the family treasure, hidden in a secret room. Fish out of water/culture clash jokes abound as he meets the rest of the family and Depp is hilarious delivering flowery, antique verbiage. Then Angelique reenters the picture and it never quite recovers. Eva Green, with her overtly masculine rasp and perfectly penciled red lips, owns Angelbay Seafood, the business which crushed the Collins' family's, and Barnabas is determined to restore both the manse and the canning factory. At its core, 'Dark Shadows' was about a family and a love triangle, not the fishing industry, and this emphasis begins the film's derailment as Barnabas's attraction to 'Vicki' gets sidelined until the final climax. (In his fourth appearance in a Burton film, Christopher Lee is wasted in a cameo as the captain of a fishing vessel.) Speaking of cameos, a packed preview screening seemed oblivious to the entrance of Jonathan Frid (recently deceased), Kathryn Leigh Scott, Lara Parker and David Selby of the original series as guests at a Collins family 'happening' designed to win over townspeople but which served little purpose but to confirm "God Bless America's" Roxy's soliloquy on Alice Cooper, who looks here like he hasn't aged a day and performs “Ballad of Dwight Fry” and “No More Mr. Nice Guy.” The Moody Blues' "Knights in White Satin, the Carpenters’ “Top of the World” and Curtis Mayfield’s “Superfly” are also nicely incorporated, for both mood (former) and comedy (two latter), but Danny Elfman plays it straight with his gothic score which fails to incorporate the series' signature theme. Michelle Pfeiffer and a flame haired Helena Bonham Carter are both terrific as the women holding the Collins' family's secrets, although the latter's character is perverted with a non-series twist (which just may set her up for a signalled sequel). But Eva Green comes on too strong and her 'seduction' of Barnabas plays like a parody of "Twilight's" wedding night. She's Burton's Beetlejuice snake. Jonny Lee Miller offers comic potential which Burton fails to mine while Jackie Earle Haley plays it too broadly. Chloë Grace Moretz is better than the character twist she's given. Production design is, as always with Burton, great, from Collinwood's skeletal chandelier and come-to-life ship's mast moldings to its shag carpets, troll dolls and Pfeiffer's fabulous macrame owl earrings. Makeup edges into the exaggerated, though - we should not see the shading done to make Depp's cheeks concave nor should Angelique look like a kabuki performer. Special fx, like the ghosts of Josette and David's mother, recall Disney's haunted mansion. A cracked porcelain doll effect and plunges into stormy seas are more satisfying. "Dark Shadows" has its pleasures, but its adaptation is hit and miss. Imagine the organic comedy that could have been inspired from the series' cheap production - the fluffed line readings and falling props - which the studio probably thought the audience wouldn't get (and based on their reception to the original Barnabas..). It's funny then, that the movie disintegrates when it tries to get back to the series' gothic melodrama and stuffs too much off brand soap into the laundry.

Barnabas Collins (Johnny Depp), jilted his witch lover, Angelique (Eva Green), and, in revenge, she turned him into a vampire and entombed him forever. 200 years later, in 1972, he is set free and decides to return to his ancestral home. There, he finds his dysfunctional descendents have put his formerly stately manor in shambles. Barnabas must stand up to his old nemesis to protect his family and save his home, Collinwood, in “Dark Shadows.” Earlier this year, the longtime collaborative team of Tim Burton and Johnny Depp reinvented the popular 1960s vampire soap opera, Dark Shadows. Now, the Blu-ray/DVD hits the market with extras limited to focal points – breaks in the film so the filmmakers can discuss, in featurette fashion, different aspects of the film as it plays – and deleted scenes. There are no audio commentaries of the film, no goof reels, no extended scenes or a making of featurette, all of which seem like obvious additions but overlooked in the Blu-ray release. The film itself starts off with brisk, dark humor that quickly establishes the plot and introduces Barnabas to us and Johnny Depp gives it his all. He dominates the film’s first half with wonderfully delivered droll humor as he makes the character, originated in TV series by Jonathan Frick, his own. I like the chemistry between Barnabas and the witch Angelique (Eva Green) up until the action ramps up and the clever repartee ends. It is not how something starts that matters, it is how it finishes, and it does not end as well as it should in the hands of Tim Burton. The film and its release to home video are both a disappointment.