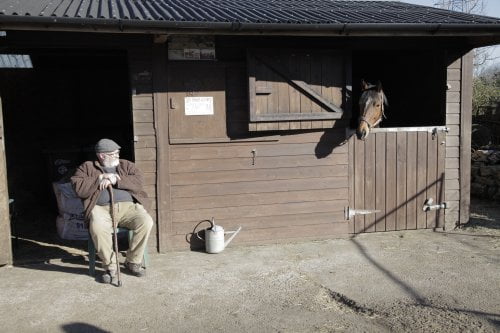 30 inhabitants of the Welsh mining town of Cefn Fforest, Caerphilly, on a whim, formed a syndicate with each chipping in 10 Pounds a week. Their goal? Buy a horse and turn it into a race champion, a genuine “Dark Horse.”

In 2000, Asta grocery store cleaner Jan Vokes had taken a second job as a barmaid in her poor Wales mining village of Cefn Fforest's blue collar men's club when she overheard Howard Davies talking about the time he owned a race horse. Then and there, she decided she wanted to breed one. Together with her husband 'Daisy,' she found a 13 year-old thoroughbred mare Rewbell, a low cost stud fee from a aging American stallion, and a group from the club willing to put up £10 a week, forming a syndicate for their "Dark Horse." Writer/director Louise Osmond's ("Deep Water") heartwarming documentary is about more than the raising and training of Dream Alliance, the name chosen for the horse that Janet built. We witness a depressed community coming together, a group of average folks who take on the sport of kings within their means and the startled reactions they receive when they arrive at elite racing tracks as owners. This is a Rockyesque tale of realistic expectations exceeded, of heartbreaking setbacks and the lifelong joy of having brushed up against the big time. Osmond, who recreates some scenes with her subjects, charts a linear path using talking head interviews, location shooting, historical stills, explanatory graphics and archival footage. It's easy to fall for the unassuming Jan and her tattooed, earringed, toothless, bear of a husband Daisy, a former coal deliveryman who brings to mind 'Keeping Up Appearance's' Onslow. It's Daisy who talks the young lad selling Rewbell for £1,000 down to £300, noting the mare's scarred legs. He's also his wife's biggest champion. When their gangly colt is born, it lives on their slagheap allotment. When it reaches the proper age, they visit Sandhill Racing Stables to engage trainer Philip Hobbs, the picture of the British horsey set, he thinks they're vacationers looking for a free tour. But their syndicate has raised the £15,000 necessary for a year at Sandhill. A few months later, Hobbs doesn't have much hope for Dream, but he enters him into novice stakes at Newbury. Jan just hopes Dream isn't last. The horse surprises with a fourth place finish. What makes "Dark Horse" so endearing is watching its syndicate interact with the upper class sport. One of Dream's first stakers, Maureen, enters a betting parlor for the first time in her life. Tony Kerby, a friend of Daisy's, brings his own six-pack to a track to avoid high concession charges and is denied entry until he claims his right as an owner. Then there's Dream, who works his way up to the Hennessy Gold Cup race, coming in second to the nation's best jumper, but when he hits the turf at Aintree in the last race before the illustrious Grand National, he suffers the type of accident most owners react to by putting their horses down on the spot. But Dream Alliance means too much to too many, his owners choosing to give over all his winnings for iffy stem cell surgery. "Dark Horse" isn't the usual rags to riches story, nor is it a Hollywood tale of an unparalleled athlete that overcomes everything in his path. It's about having a dream and seeing it through and the lifelong bonds and satisfaction that follow. It's also a great documentary about one amazing horse and the people who love him. Grade:

This true life rags-to-riches story has a heart as big as its star, Dream Alliance, the working class horse that became a champion. Writer/director Louise Osmond tells the syndicate’s story from recollections of how it all began and follows them and their Dream through the hard times and the good. It is not a smooth ride for the working class heroes who had the audacity to even try to enter the Sport of Kings. The alliance had to find a brood mare and a stallion to get their project started with the prime concern that the resulting colt or filly be “cheap and cheerful.” They get their wish and thus set off on the long road to train their Dream, enter him in his first race and continued to make inroads into the sport that previously to the upper, upper class. Director Osmond brings us into the lives of the members of the syndicate as they make their plans for Dream Alliance. We see them, en masse, board a hired school bus to attend one of his races with one of their number bringing a sack lunch and lagers into the race track. He is stopped until he convinces the track officials that he is, in fact, one of the owners. He gets to bring in his lunch and beers. There is a palpable affection by the entire syndicate member for their nag turned champion. I will not go into the details of all the races and the highs and lows of Dream Alliance’s checkered career, his injuries and recoveries. All the time, the horse seems to reciprocate the affection and runs his heart out for his phalanx of owners. Anyone who has a love for our equine friends and horse racing will enjoy “Dark Horse” to the fullest.