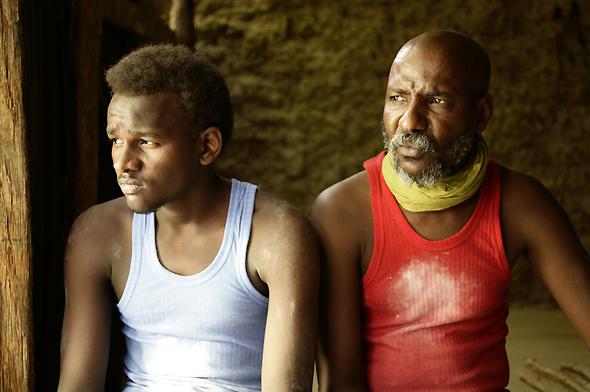 When the Commission of Truth and Justice announce amnesty for Chad's civil war criminals, Atim (Ali Barkai) accepts his father's gun from his blind grandfather (Khayar Oumar Defallah, "Bye Bye Africa") and leaves his home to avenge his dad's death during "Daratt."

Writer/director Mahamat-Saleh Haroun's ("Abouna") film is a beautifully characterized reflection on revenge and forgiveness that is both reminiscent of and an inverse of the Dardennes brothers' 2002 "The Son." "Daratt" also features a tradesman (in the former film, a carpenter; here a baker) who has a troubling connection to the teenaged boy who would be his apprentice. The African film, though, is also set against a political backdrop and has external characters who impact the primary relationship. It is also a coming of age story where an angry young man becomes a man through an act of forgiveness. Atim is harassed by military police on his way to the big city when Moussa (Djibril Ibrahim) offers unwanted aid, yet gets Atim to slow down. A baker, Nassara (Youssouf Djaoro), sees Atim closely watching him as he distributes his bread and offers the young man a job. 'Making bread requires love and devotion,' Nassara tells Atim as he shows him the ropes and promises to make a great baker out of him. Nassara's wife Aicha (Aziza Hisseine) also likes the boy and her presence is one of laughter and lightness. But no matter how hard Nassara tries, he cannot get Atim to go to Mosque nor does real trust develop - it is clear Atim is holding back and it is because Atim has not randomly met Nassara, the man who would call him son. The film is wonderfully acted by the mostly inexperienced (Djaoro is the exception with two prior credits) cast. Barkai shades his suspicions and predetermined agenda with just the right amount of open mindedness and Defallah and Hisseine provide support to the flip sides of Atim's decision while Ibrahim is a stabilizing influence on the country boy facing big city realities. Djaoro is regal in his bearing and gives Nassara an air of both experience and wisdom tinged with remorse. Cinematographer Abraham Haile Biru's beautiful compositions are particularly notable for his attention to color - blue jeans against a blue painted wall, for example, are striking, as are primary colors backgrounded by sun-blasted terrain. A figure is positioned next to a bread advertisement so that it suggests a thought balloon. Haroun builds his tale to an emotionally charged final act where both blood and adoptive family are confronted with the past and its shadows on the present. "Daratt" is redemptive for its characters and cathartic for its audience.