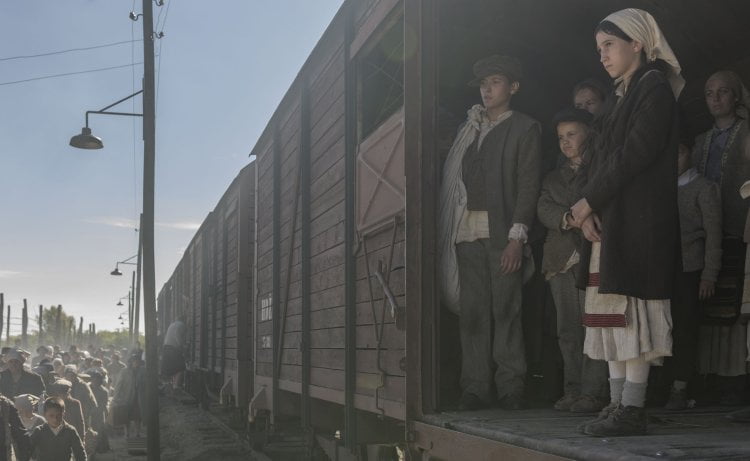 In 1941, 10 year-old Dara (Biljana Čekić) trudges along with the Serbian villagers being led to a train station by Father Majstorović (Vuk Kostić).  The young girl witnesses a woman surreptitiously leave her baby with a Croatian woman, then, after boarding the train, sees the priest shoot the ill and elderly left beside the tracks.  Further horrors will await her at the only WWII concentration camp not built and run by the Germans in “Dara of Jasenovac.”

Director Predrag Peter Antonijević (“Savior”) shines a light on a little known part of WWII history from the point of view of a young girl in a meticulous and artfully shot production that tells a tale so bleak, “The Painted Bird” seems less relentless in retrospect.  Although the film is fiction, screenwriter Natasa Drakulić, who lost family members in Jasenovac, took every event from historical records so everything seen here is accurate (although according to the press notes, the film’s most horrific scene, a torturously sadistic ‘game’ of musical chairs, was known to have happened with children rather than the grown men Antonijević uses and still had difficulty shooting).

At first Dara, herded into a rough shelter with other children and their mothers, is a silent observer, but when a round-up of fifteen year-old boys includes Dara’s twelve year-old brother Jovo (Marko Pipić), her mother Nada (Anja Stanic Ilić) aggressively pleads his case only for them both to be shot on the spot and now Dara must act as she is the sole protector of her baby brother Bude.

What Dara does not know is that her handsome father Mile (Zlatan Vidović) is just a few miles upstream, digging the mass graves for the bodies being shipped there, including those of his wife and son.  He, too, is given a reason to fight when he learns his daughter and youngest are still alive.

The film, beautifully shot in widescreen by director of photography Miloš Kodemo, illustrates Jasenovac’s commander Vjekoslav “Maks” Luburić (Marko Janketić) as so sadistic, a visiting SS officer finds him off-putting, questioning the presence of the Serbs among the Jews and Roma.  Maks commands with his sister (Alisa Radaković), so depraved she gets sexually excited by the violence and death.  And while we see children herded into a basement where they will be gassed, the executions at Jasenovac are generally more personal, Maks slitting throats with relish while his men use sledgehammers and rocks.  Antonijević only offers glimmers of light in death, represented by a train car in gently falling snow where the deceased take shelter and find peace.  The complicity of the Catholic Church in all this horror is underscored by the nuns who cross themselves after mass executions, their mother superior cruelly performing triage when those dispatched to the hospital never return.

That nun is Dara’s biggest challenge, her mother’s friend first saving her from banishment from her reeducation class by claiming her.  Once that protector, too, is killed, Dara must defend Bude’s constant crying as hunger.  She is helped by a young Jewish woman, Blankica (Jelena Grujicic), who slips her pieces of bread.  It will take brave subterfuge and sudden sacrifice to save the little boy.  Antonijević wraps on a note that is at once hopeful and frustrating in its irony.

Many of this year’s international submissions have involved varying degrees of intolerance.  In Bosnia and Herzegovina's International submission, "Quo Vadis, Aida?," we witness Bosnian genocide at the hands of the Serbs.  In Serbia's submission, we see their own bleak history at the hands of the Croatians.  Why do those who have been victimized so cruelly mete out the same upon others?  That is a mystery worthy of another film.

In 1941, the Independent State of Croatia (NDH) aligned with Nazi Germany to exterminate every Jew and Roma (Gypsy) in the country. But, the Croat genocide was not just against these societal outcasts. It also included the entire Serbian population and the plight of the Serb nation is seen through the eyes of “Dara of Jasenovac.”

Like most people, at least those who believe facts, I know about the Nazi Holocaust and its ghastly details of extermination. I was far less familiar with the concurrent genocide that the NDH committed against the non-Croatian people during WWII in what was once Yugoslavia.

Serbian writer-director-producer Predrag Antonijevic takes on the daunting task of presenting the little known horror inflicted on those abovementioned Orthodox Catholic Serbs whose terrible deed (one, at least) was to cross themselves differently than their so-called Christian Catholic  Croatian cousins.

The terror depicted here is unfortunately accurate and horrific in a way that almost, and I stress the “almost,” makes the Nazis and their “less personal” mass murders look like the acts of boy scouts gone bad. But, please, be warned, that the violence depicted here is graphic, brutal and honest. The things shown, like a macabre and deadly game of musical chairs as “dinner entertainment,” are toned down from the actual “game.” As bad as the scene is, knowing what really happened is even more sickening.

The story, as told through the observant eyes of 10-year old Dara (Biljana Cekic), begins with the Croatian roundup of Serbs, Jews and Roma for deportation to the Croatian’s Ustache Military Station. From there, they are shipped to an old brick works where the mass executions take place. The attention to the details of the deportation and the horrific aftermath pulls no punches, so be aware.

It is too bad that humankind’s history is wrought with such horrors as world war, the Holocaust and what is shown in “Dara of Jasenovac.” Man’s inhumanity to man is summed up when a German Nazi officer asks the Croatian concentration camp commandant, “”Why do you kill Serbs?” His answer is, “Because they are Serbs.” That kind of mindless hate is, unfortunately, a part of our national character now. I hope it is not too late for change.