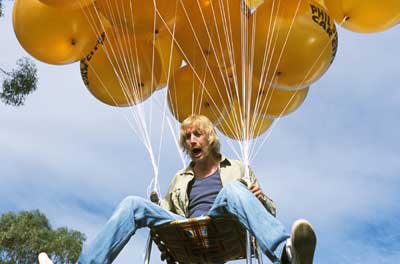 Danny Morgan (Rhys Ifans) toils hard as a cement worker for 50 weeks a year and dreams about flying away to the far north of Australia and camping in the wild. His live-in girlfriend Trudy (Justine Clarke) is an ambitious (and very selfish) realtor on the fast track. When she cancels his treasured vacation on a false pretence, subbing with a family barbee, he decides to amuse himself by tying a bunch of helium filled balloons to an aluminum lawn chair. When his invention shoots him thousands of feet into the sky a legend is made in “Danny Deckchair.”

Loosely based on the experience of Darwin Award winner Larry Walters - the 1982 urban legend who reportedly tied a bundle of weather balloons to his lawn chair and launched himself three miles over Californian airspace – “Danny Deckchair” takes these exploits as the basis for a quirky romantic comedy. Danny lives for his two weeks of bliss in the wilderness. Just as he is preparing for his latest camping trip, girlfriend Trudy announces that she must work and his trip is no more. Now, Danny must amuse himself and, during the aforementioned barbeque, assembles his latest wacky invention. The balloon-supported deckchair works all to well and, before his astonished friends, he ends up floating high above Sydney. Trudy tries to chase after him but Danny drifts into the clouds and is, literally, lost in space. Many hours and many miles later Danny comes through the clouds and discovers that he’s not in Sydney anymore. Suddenly, fireworks are going off all around him and his balloons begin to pop. Without their support he plummets to the earth, his fall broken by a tree, and lands in the back yard of Glenda (Miranda Otto). When the townsfolk come storming her door in search of the UFO they saw in the sky, she tells them that Danny is her old professor from college. Danny introduces himself as Mr. Daniels and settles down to enjoy the small town life of Clarence, Australia. Meanwhile, back in Sydney, Trudy revels in the 15-minutes of fame that Danny’s disappearance has caused and is courted by local sports reporter Sandy Upman (Rhys Muldoon). The Sydney officials mount a search for the missing balloonist but, as time passes, there is dwindling hope for Danny’s survival. Mr. Daniels, in the meantime, discovers that he is not just at home in Clarence, he loves the place (and Glenda, too). He gets involved in town politics and helps a local, Big Jim Craig (Anthony Phelan), with his parliamentary campaign. As Danny solicits votes for Big Jim, he becomes increasingly engrossed in life in the charming town and learns that he is becoming quite fond of the people, especially pretty Glenda. In more ways than one Danny Morgan becomes a local hero. Former story board artist and second unit director Jeff Balsmeyer takes a leap as the first time writer/director for “Danny Deckchair.” His creation takes Larry Walters’s urban legend and uses the wacky premise to build his stranger-in-a-strange-land tale that is a combination of “It’s a Wonderful Life,” “Mr. Smith Goes to Washington” and “Local Hero.” It’s a nice idea but the result is less than it could have been. There are two problems with “Danny Deckchair” that cause it to fall short of my expectations for a fantasy/romance. First, and unfortunately, Rhys Ifans is miscast in the role of the Jimmy Stewart character. The normally supporting character funnyman is called upon to take on the romantic lead persona, putting his usual mugging aside, but fails to put any life into Danny Morgan. Ifans uses a wistful expression and soulful gaze to show the character’s depth and the result is a wooden performance that fails to anchor the film. The other thing that detracts from the intent of “Danny Deckchair” is the lack of quirky characters in the town of Clarence. Sure, there is the occasional oddball hanging around but the film really needs a collection of idiosyncratic town folk to make you feel you are in a magical land. “Local Hero” accomplished this expertly and “Danny Deckchair” borrows liberally from the older film without recreating its charm and wit. A plus for “Danny Deckchair” is the sweet, likable performance provided by Miranda Otto as the town’s sole parking cop who immediately falls for the man who fell to earth. Her gentle demeanor and winning smile make Glenda the most compelling character on the screen. Techs are solid.