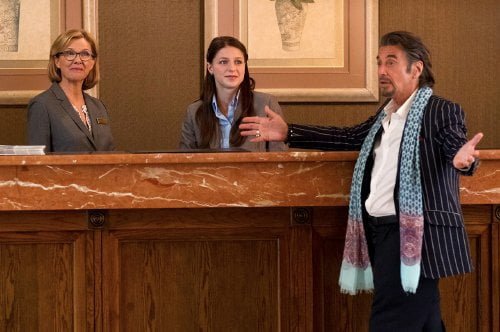 Danny Collins (Al Pacino) has been in the music business and a star for 40 years. His indulgent lifestyle of drugs and booze comes to a screaming halt when his manager, Frank (Christopher Plummer, gives him a very special birthday gift: a letter, never delivered, written to Danny by John Lennon in 1971. This discovery triggers a big change for the showman as he tries to mend all the broken fences in his life in “Danny Collins.”

In 1971, a young singer/songwriter sits in the office of a music magazine being told his career's about to take off. Over forty years later, the now aging rocker (Al Pacino) is playing nostalgia concerts, milking his old hit 'Hey Baby Doll.' He's jolted out of his debauched complacency when his best friend and manager Frank Grubman (Christopher Plummer) presents him with an extraordinary birthday gift, a letter written to him all those years ago by John Lennon with a bit of advice for "Danny Collins." Writer Dan Fogelman ("Crazy, Stupid, Love.," TV's 'Galavant') makes his directorial debut by spinning British folk singer Steve Tilston's true story into a cliched tale of redemption which nonetheless manages to charm largely due to its astutely assembled cast. While Pacino isn't exactly the most convincing rocker, he's dialed down his propensity to play to the rafters in a performance grounded in humility yet still entertainingly energetic. Danny's got a coke habit, a much younger fiancee and a gatekeeper who stalls for time so Sophie (Katarina Cas, "The Wolf of Wall Street") can get her younger lover out of his mansion. He knows his career has been coasting on old hits for decades, visualized by Fogelman when he stops his car outside Chateau Marmont where a billboard advertising his third greatest hits release looms. Realizing that his whole life might have gone in a different direction had he gotten that Lennon letter back when it was sent (it included John's personal phone number), Danny decides it's time to reinvent his wheel - in New Jersey. We can guess at the reason for the location, but Danny engages with an entirely different family first, that of the Woodcliff Lake Hilton, where he takes up extended residence much to the awe struck delight of its staff. Danny's exuberant appreciation for valet boy Nicky (Josh Peck, "The Wackness") turns into matchmaking when he meets college aged reception clerk Jamie (Melissa Benoist, TV's 'Glee,' "Whiplash"), but it's hotel manager Mary Sinclair (Annette Bening, "The Kids Are All Right") who gets him thinking about more age appropriate romance for himself. When he goes to meet the son who resulted from a one night stand on a long ago tour, his pregnant daughter-in-law Samantha (Jennifer Garner, delightful) warns him not to expect a welcome reception. Tom (Bobby Cannavale, "Win, Win") comes home from his construction job to tell dad to hit the road, but Danny, who arrives in a gigantic tour bus emblazoned with his mug, finds a way back by locating a pricey school tailor made for his bright but learning disabled granddaughter. It's hard not to notice every screenwriting beat being banged here, especially when a third act disease is introduced, but Fogelman's dialogue zips and zings. Danny's wooing of Mary is one of the film's highlights, their repartee warm and funny and perfectly organic to a show boater and the wallflower waiting to bloom. Danny's abandonment of the new song he's written for a low key local show doesn't ring true, but Fogelman wraps beautifully, two relationships left unfully formed but hopefully. Like its great cast, an amazing soundtrack of well chosen Lennon songs from 'Working Class Hero' to 'Beautiful Boy' also helps to gloss over the script's well trodden path. "Danny Collins" may not be anything new, but under Fogelman's direction it never feels like it's simply going through the motions. Grade:

The opening title for “Danny Collins” is ”…kind of based on a true story a little bit,” setting the tone for a genial, upbeat tale of an aging rock star’s journey of redemption. Writer turned first time director Dan Fogelman adapts a real life event – musician Steve Tilson was the non-recipient of the ’71 letter from John Lennon - and gives Al Pacino one of his most charming (in a Pacino way) performances of late. The story, by Fogelman, is routine and done before but the helmer has an A-list cast who all give depth and emotion to their characters. When his best friend, Frank (a marvelous performance by octogenarian Christopher Plummer, who continues to shine as an actor), presents him the above-mentioned letter, it is an epiphany for Danny and he tries to (not always successfully) change his hedonistic ways. He has lived off of his early songs for many years – his biggest hit, “Hey Baby Doll,” has been his mainstay for his concerts that play to the parents and grandparent who grew up with his tunes. Danny , until the letter, is just going through the motions of life. With the letter comes the need to correct his life mistakes, the first of which is to walk out on his cuckolding, half his age fiancée, Sophie (Katarina Cas). He journeys to far off New Jersey on a mission to find the son he never knew, Tom Donnelly (Bobby Cannavale), and make amends. When he goes to Tom’s home, he meets Samantha (Jennifer Garner), Tom’s wife, and their ADHD daughter, Hope (Giselle Eisenberg). When Tom arrives, he throws Danny out. Danny, though, does not take no for an answer as he insinuates himself into their lives in significant ways. The serio-dramatic story is lightened, though, when Danny takes up residence at a New Jersey Hilton Hotel. He glad hands the help, tipping big and flirting shamelessly, especially with the hotel’s attractive manager, Mary Sinclair (Annette Bening). She is very much his equal as he repeatedly asks her to dinner and she repeatedly refuses. A nice bond develops between them and she becomes his muse, encouraging him to write music again. Their time together is melancholy and charming and includes some of the films funniest bits. “Danny Collins” has a great cast given full character right down to the smaller supporting roles. Dan Fogelman has proven to be an effective scripter and shows maturity in his first time at the helm. He and his cast and crew create an amiable fairy tale of love and redemption that will appeal to older audiences.