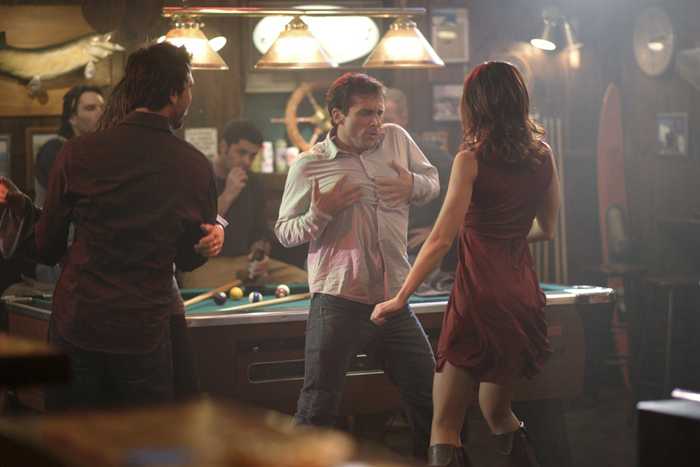 Widowed Dan Burns (Steve Carell, "The 40 Year Old Virgin") has his hands full with three daughters ranging from a fourth grader to high school senior. When he drags the family to the annual gathering at his folk's homestead on Narragansett Bay, his mother (Dianne Wiest, "Edward Scissorhands," "Bullets Over Broadway") is quick to tell her sad-sack son to 'get lost.' Something amazing happens - Dan meets Marie (Juliette Binoche, "Chocolat," "Breaking and Entering") in the small town's book shop and it appears to be love at first sight - except that she is attached. When Dan returns home he meets his brother Mitch's (Dane Cook, "Mr. Brooks," "Good Luck Chuck") new girlfriend - Marie - and the two must hide their attraction in "Dan in Real Life."

Cowriter (with Pierce Gardner)/director Peter Hedges ("Pieces of April") uses the family gathering of his first film and crosses it with last year's "The Family Stone" to arrive at a thoroughly contrived romantic comedy that is spiked into the end zone by its engaging cast and shambling production design. Carell and Binoche have loads of chemistry, Cook is surprisingly right and the three actresses cast as the Burns girls (Alison Pill, "Pieces of April," as Jane; Brittany Robertson, "Keeping Up with the Steins," as Cara and Marlene Lawston, "Flightplan," as Lilly) are individuals who play their plot points with panache. Before heading off to Nana and Poppy's (John Mahoney, TV's "Frasier"), we learn that Dan's parental concern is on the over protective side. Jane has her learner's permit but is never allowed to drive. Cara is in the throws of a passionate first love which makes Dan catatonic with shock. Lilly's grown up observations are attributed to her sisters. Once their grandma has forcibly but kindly removed him, Dan is unmoored, but Hedge's makes his and Marie's meet cute uniquely satisfying, a bit of comic self-revelation delivered through books. The Burns family, is, of course, the type of good-natured sprawl that engages in group workouts, touch football and talent shows, and despite Dan's news of having met someone, no one cottons onto the fact that it is the newcomer in their midst. Maybe that is because the whole family so falls in love with Marie, that everyone's attention is constantly on her, especially, of course, the Burns girls. It is a good thing, then, that Binoche's charm makes all this attention merited. She's sexy and charming and mysterious and maternal and sparks beautifully with Carell while not seeming out of reach of playboy Cook. Carell plays a more matured version of his inept Virgin, and Hedges gives him plenty of uncomfortable moments to sweat out his schtick in. Cook, whose comedic talents have been a mystery to me, makes Mitch just appealing enough. His riffing out a tune with older brother Clay (Tony award winner Norbert Leo Butz, 2005's "Dirty Rotten Scoundrels") on Dan's upcoming blind date could be compared to a Flight of the Concords number. And speaking of that date, meddling mom's invite to Ruthie 'Pig Nose' Draper invites another divisive element into the Burns clan in the figure of too hot-to-trot Emily Blunt ("The Devil Wears Prada," "The Jane Austen Book Club"), even if her character is an all too convenient tidying device. As Dan's sister Amy, Jessica Hecht (TV's "Friends," "Sideways") adds some familial warmth. Felipe Dieppa is the cute object of middle daughter Cara's overwrought devotion. The film's weakest 'inspiration' is Dan's profession as author. The film's title is the name of his newspaper column which is a finalist to become syndicated in a decision that is, of course, being made the weekend his life is put into tailspin, a bit of script overstuffing that adds nothing to the story. It is unclear whether Hedges and Gardner intend the utter banalities others quote back to Dan with admiration as black humor, but if not it sure paints him as a uninspired partner for the worldly Marie. Hats off to production designer Sarah Knowles ("The Notebook," "Invincible") who gives Dan a real, lived-in house before moving him to the nostalgic coastal location, where childhood memories haunt shut down tourist traps. The rustic, clapboard coastal 'cottage' may be one of those overly idyllic movie homes, but its interior reflects a family history and Dan's temporary space in its laundry room is good for a few laughs. There is nothing new or even 'real life' about "Dan in Real Life," but its cast breathes humor, warmth, and yes, life into it.