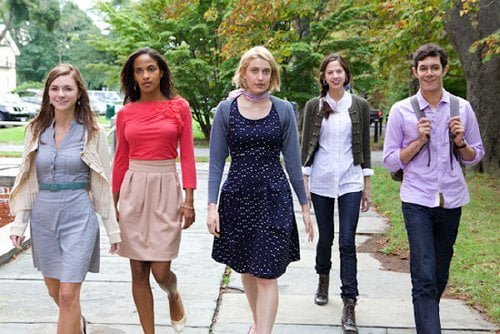 A trio of coeds at Seven Oaks College is determined to make a difference on campus. They recruit a newcomer to their circle that is set to cure student depression at their Suicide Prevention Center and make campus life better for all through dance in “Damsels in Distress.”

At Seven Oaks University's new student orientation, transfer Lily (Analeigh Tipton, "Crazy, Stupid, Love.") is gratefully puzzled to be adopted by the campus's reigning do-gooders Violet (Greta Gerwig, "Hannah Takes the Stairs," "Arthur"), Rose (Megalyn Echikunwoke, TV's '90210') and Heather (Carrie MacLemore). The trio run the Suicide Prevention Center enticing troubled classmates with free coffee and donuts before applying their tap dancing aromatherapy techniques. But when Violet helps one such victim, Priss (Caitlin Fitzgerald, "It's Complicated"), only to be romantically betrayed, Lily realizes her friends are "Damsels in Distress." Writer/director Whit Stillman ("Metropolitan") is known for his arch portrayals of young well-off WASPs, but he hasn't made a film since 1998's "The Last Days of Disco." Perhaps he waited too long. Those expecting a familiar voice may be taken aback by his latest, which plays like Todd Solondz had remade Kenneth Branaugh's "Love's Labour's Lost." The film has intermittent chuckles, but despite a pitch perfect performance from Greta Gerwig, who appears to get her director's vision with a vengeance, a little of "Damsels" goes a long way. The first thing the bunch of posies do with their new flower is to dictate their skirt and sweater-set fashion sense upon her. Perfume is also a necessity for the delicate noses which have a tendency to experience 'nasal shock syndrome' whenever a bunch of fetid jocks walk by. Violet is a big believer in their Roman letter oriented fraternities, especially D.U. where her beau Frank (Ryan Metcalf) resides. Lily meets the dumb bunnies of D.U. so she can be indoctrinated into Violet's belief that picking a loser is wise as one can only look better in comparison as one helps another rise to a new level. In the film's funniest gag, Lily is brought to the Suicide Center (Violet must pick up the Prevention part of the sign on their way in). As oddballs like black-clad Debbie (Aubrey Plaza, TV's 'Parks and Recreation'), Mad Madge (Alia Shawkat, "Cedar Rapids") and Freak Astaire (Nick Blaemire) contort themselves in front of a dance mirror, the foursome meet Jimbo (Jermaine Crawford, HBO's 'The Wire'). As he's from Doar Dorm, they suggest his troubles lie with his foul smelling abode, but turns out he's not just there for the free coffee and donuts, but to tell them about Priss, depressed since her boyfriend dumped her. As Violet goes about her hygienic, high-minded missions, Lily falls in with a couple of men. Her best friend is sophisticated Frenchman Xavier (Hugo Becker, TV's 'Gossip Girl'), but he's got a girlfriend. She's ditched pronto, though, when local businessman Charlie (Adam Brody, "Jennifer's Body," TV's 'Good Vibes') decides to buy the trio founds of drinks. Upon hearing about this later, Rose deems Charlie a 'playboy operator' while Violet sees him as generous. And on and on this silliness goes, all delivered in a serious monotone meant to heighten the hilarity. The same jokes are repeated over and over (and over), except for one transgression of exceptional oddness when Lily gets romantic with Xavier and discovers he's a proponent of Cathar Love (i.e. anal sex). Violet does her own version of going out into the dessert when she disappears and checks into a local Motel 4 where some exceptionally fragrant soap not only lifts her out of her depression, but presents her with an idea to save her beloved frat jocks (who have begun jumping off the roof with mezza mezza results). Stillman wraps with Violet's endeavor to go down in the history books by inventing an international dance craze. I suppose this could be shoved into Stillman's oeuvre as another portrait of well meaning bourgeois types looking down their noses at those they would recruit into their world of rules and rites, but the tone is off. The rundown of the goings on may sound funny, but the direction is airless and flat with no underlying genuine mirth. Only Greta Gerwig with her skinned knee sexuality manages to give layers to her earnestness, backing up when challenged (often by Tipton's Lily) to reassess her own words and actions. Subplots like Violet's antagonistic relationship with school paper editor Rick DeWolfe (Zach Woods, "In the Loop") are raised and dropped. The frat boys' problems, like Thor's (Billy Magnussen, TV's 'As the World Turns') never having been taught to distinguish colors, are too illogical to be particularly funny. Actors like Plaza are hired to seemingly stand about and be recognizable. And, ironically, except for Violet, none of the characters are in any way relatable. The film's production location at Snug Harbor, New York, appears too contained. One can almost envision the crew outside the camera's sight lines. "Damsels in Distress" may amuse some, but it's too self aware and starchy. This time around, Stillman appears to be taking awkward jabs rather than making wry observations.

Violet (Greta Gerwig), Heather (Carrie MacLemore) and Rose (Megalyn Echikunwoke) are determined to change the male dominance on campus and end the depression epidemic (as they see it) in the student body. When transfer student Lily (Analeigh Tipton) arrives at Seven Oaks the girls take her under their wing to protect and educate the newcomer, who is much wiser than they give her credit for. Writer-director Whit Stillman has been away from the camera since 1998 with “The Last Days of Disco” and the long hiatus from filmmaking shows. “Damsels in Distress” feels like the work of a newcomer with its two-dimensional characters, opinionated and prejudiced viewpoints and lack of warmth. The characters are all two-dimensional but Greta Gerwig pulls off the film’s best humorous moments with her earnestness. I enjoyed the filmmaker’s earlier works more and his latest lacks maturity and evolution one should expect after 13 years.