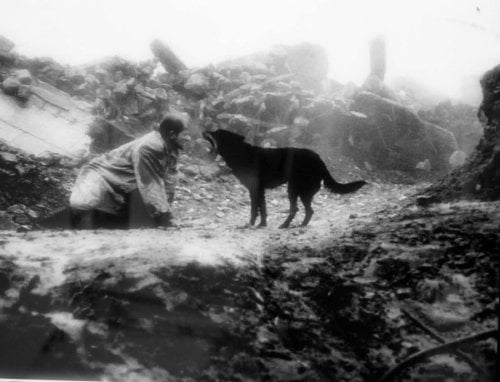 In his first work with writer friend László Krasznahorkai, the Béla Tarr most known to today's art house audiences emerges. Beginning with a long, slow tracking shot of a coal transport gondola being viewed by a man from his window, we immediately note a director in complete control. The scene is meticulously composed, the camera moving ever so slowly to reveal a point of view from behind its subject, the sound of the carts chinking over track links methodical and oppressive. Mihály Vig's mournful score will reverberate through future films. The tale is a fairly straightforward love triangle under Communist rule that adds another layer of betrayal to the mix. Karrer (Miklós Székely B., "Hanussen") lusts after a singer (Vali Kerekes) at the Titanik bar who sings of loss. She's willing to be with him until her husband, Sebestyén (György Cserhalmi, "Mephisto," "Kontroll") returns from his latest smuggling job. Willarsky (Gyula Pauer), the bartender (he and his bar reappear in "Werckmeister Harmonies"), offers them a job transporting black market goods. Later he tells Karrer that his delivery was 'light,' accusing Sebestyén of sticky fingers. The Titanik's cloakroom attendant (Hédi Temessy, "Almanac of Fall") gives Karrer unheeded advice, later appearing in the rain to quote the Bible like some kind of lost Guardian from "Wings of Desire." The precision of Tarr's direction is perhaps most evident in the famous tracking shot of a row of connected buildings (also present in "Werckmeister Harmonies"). The camera notes the changing texture of the wall which breaks three times to reveal a tableaux of human misery. A man tap dances in the rain. Krasznahorkai introduces his first animal motif as packs of stray dogs wander through the village streets. At times, the film's portentousness almost becomes a parody of itself, but the film's climatic bark off between Karrer and a junkyard dog is not one of them. "Damnation" is a mesmerizingly bleak film.