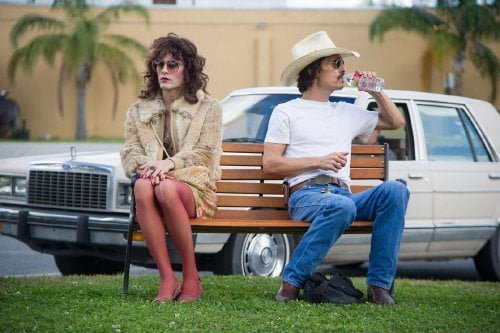 Ron Woodroof (Matthew McConaughy s a good ole boy Texan electrician worker on the oil rigs that dot the landscape. In his spare time, though, he is rodeo cowboy and a heterosexual sex machine. It is 1985 and the AIDS virus has decimated the gay community so Ron turns angry when he is told that he is HIV positive and has 30 days to live. The tough Ron, though, will not be daunted by the FDA and seeks out his own treatment, both legal and illegal, and creates the “Dallas Buyers Club.”

When Texas construction electrician Ron Woodroof (Matthew McConaughey, "Magic Mike," "Mud") is injured on the job, he gets surprising news at the hospital - he's not only tested positive for HIV, is T cell count is so low the doctor's surprised he's still alive. The homophobic womanizer goes into a spiral of denial before he begins to fight, but when he learns he cannot get into an ACT drug trial, he finds treatment unapproved by the FDA in Mexico. Ron's new therapy works where ACT doesn't, so he decides to get around the FDA and make a profit by smuggling proteins and vitamins into the U.S. and distribute them via monthly membership in his "Dallas Buyers Club." The frustrating procedural delays of the FDA during the early days of the life or death AIDS crisis have been well documented in two outstanding documentaries, 2011's "We Were Here" representing the West Coast, 2012's "How to Survive a Plague" the East. Now, with the true life story of Woodruff, we land smack in the middle of the U.S., in one of its reddest states, to follow the arc of a reluctant activist. But director Jean-Marc Vallée's ("The Young Victoria") film succeeds on the strength of its performances more than in the telling of the story. The film conversely feels like pieces are missing, the film perhaps edited for length, while also occasionally repetitive, time given over to scenes of little consequence while more dramatic moments play off screen. McConaughey's been having quite the run ever since a small role in "Tropic Thunder" and here he gives an uncompromising portrayal of a redneck whose only goals in life are booze, cigarettes, coke and women, preferably more than one at a time. He's violently profane when given his diagnosis, understandably enraged when it him a pariah. When his black market ACT dries up, he's pummeled by its source on a hospital loading dock and, when coming to in a hospital room, reacts badly again to his compassionate roommate, Rayon (Jared Leto, "Requiem for a Dream," "Chapter 27"), a gay transsexual. But it's Rayon who provides him with the in to other patients, so the odd couple set up shop in a local motel. Ray, who initially disguised himself as a priest to smuggle drugs from Mexico, is soon a businessman traveling to Tokyo, Israel and Amsterdam all the while fighting concerned local doctor Eve Saks (Jennifer Garner, "Juno," "The Odd Life of Timothy Green"), local law enforcement and the FDA itself (his lawsuit against the FDA is handled almost as an afterthought). Leto, who also dropped severe poundage (after having gained at least as much to play Mark David Chapman), just about steals the film with his self-destructive yet caring Rayon. The actor, who makes an even prettier woman than Cillian Murphy in "Breakfast on Pluto," creates a character who's strong enough to take her partner's gibes in stride while yearning for his acceptance. In the film's most affecting scene, Ray introduces Rayon to his old construction buddy T.j (Kevin Rankin, "White House Down") almost as a dare and when he stands up for her, the wash of emotions that play over Leto's face tells all, the actor suddenly going all submissive to his hero. McConaughey gradually turns Ray's annoyance into affectionate exasperation. It's a shame that Rayon's character's exit from the film is handled so abruptly, as Ray and Rayon's unlikely friendship is the heart of the film. Garner has the secondary arc as the medical professional who tries to play by the book only to realize it doesn't fulfill the readers' needs. But it's Griffin Dunne, in a smaller role as a disgraced American doctor working in Mexico, who makes a stronger impression, largely because of the awkward way characters and story elements are pieced together. Steve Zahn, third billed, is a local policeman who asks Ray for a favor, but his thread has been relegated to patchy footnote. The Dallas Buyers Club becomes big enough to fund an administrator, but although she's often seen she's never named. A montage of Ray traveling through airports hints at more of the story left untold. "Dallas Buyers Club" is a choppy film about an extraordinary subject that may at least clue in those who wouldn't watch a documentary on the subject about the horrific early obstacles facing AIDS sufferers. The real reason to see it is for the beautiful bond created by two actors playing opposite sides of the fence.