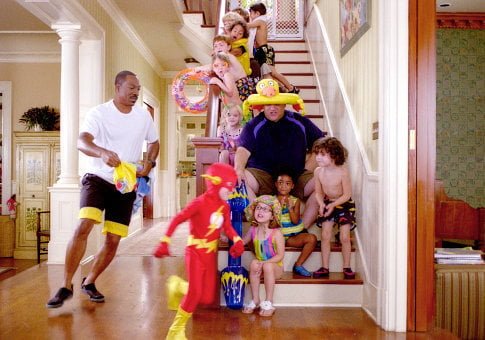 When Charlie (Eddie Murphy) lost his job heading the ad campaign for a vegetable-based cereal called Veggie-O's, he and his friend Phil (Jeff Garlin), also pink-slipped, must face unemployment, accumulating bills and working wives. They also have to take their sons out of the exclusive Chapman Academy preschool program, run by Miss Harridan (Jessica Huston), the schools ironhanded mistress. Then Charlie has an idea: make being a parent into a profession in "Daddy Day Care."

Charlie (Eddie Murphy) and Phil (Jeff Garlin, "Full Frontal") take their preschoolers Ben and Max to the playground daily after having both lost their marketing jobs. Laid-back Phil is accepting of his lot, but Charlie is brewing for a challenge. An off-hand compliment on their ability with children from the wife of a friend (Siobhan Fallon, "Holes") makes a lightbulb pop over Charlie's head and he and Phil go into partnership with "Daddy Day Care."

Supporting players save "Daddy's" day in this pleasant, fitfully amusing family comedy which entertains despite an inconsistent script (Geoff Rodkey) and insipid direction from Steve Carr ("Dr. Dolittle 2"). Although this is a step in the right direction for Murphy, he largely hangs back, letting costars Garlin, Zahn and Jonathan Katz shine. The children are all well cast with the glaring exception of Khamani Griffin as Murphy's son Ben, whom Carr covers for with one too many badly executed vocal overdubs.

Charlie and his wife (Regina King) are fast trackers who enroll Ben in Chapham Academy, the type of preschool that begins to prepare four-year-olds for SATs. When Charlie loses his job and the budget gets tight, the Hintons conclude that Chapman's high fees are no longer justified. Daddy Day Care gets off to a rocky start, but the kids are having a blast and word of mouth begins to siphon off Chapman students raising the vengeful ire of Miss Harridan (Anjelica Huston, "The Royal Tenenbaums"), Chapman's fun-free headmistress.

If you can overlook a script that frequently wants to have things opposite ways (Daddy Day Care can't afford commercial rent but can throw up a professional looking amusement park to earn money) and goes too far out of its way to make points (Charlie returns to the corporate world in order to quit the same day with the 'revelation' that his heart lies with his kids), you'll probably enjoy "Daddy Day Care" for what it is - a cliched but good-natured lightweight flick. Each of the kids has a cute problem to overcome (Dylan has separation anxiety, Tony won't get out of his Flash costume, Ben has trouble making friends, Max is still not potty trained) and not a single one of them has the same species of animal for pet show-and-tell day. The film features an overloud soundtrack with some hits (the Ramones "I Wanna Be Sedated" plays over a montage of sugar-rushed kids) and more misses (more noisy out-of-control kids are accompanied by "Barroom
Blitz?").

Murphy radiates warmth as Charlie, but does little that's actually funny. He's the businessman to Phil's entertainer. Garlin is a natural, tossing off one funny line after another and bouncing his bulk through a kiddy mine field. Steve Zahn is always an asset and his Marvin, the 'guy who smells the mail,' is no exception. A Star Trek nerd who is the only one to realize that Nicky, a day care charge, only speaks Klingon, Zahn divides him time between physical pratfalls and the movie's sweetly naive romance with day care mom Kelly (Leila Arcieri, "XxX"). An inspired casting choice is Katz, who makes Mr. Kubitz, the Child Services inspector wielded by Harridan, a delightfully droll straight man to Murphy, Garlin and Zahn. Anjelica Huston plays Harradin as a headmistress right out of an S&M bondage fantasy, but the script gives her no place to go with it. The child actors have varying degrees of success with their roles, with the young actress who plays the precocious Becca showing off the best facility for delivering lines with flare.

This is a straightforward, don't-expect-any-surprises kind of pre-summer entertainment that has a good supporting cast, precocious kids and a premise that lends itself to slapstick comedy. Once the groundwork is laid, with Charlie out of work and in financial straits, the rest is by the numbers. Scripter Geoff Rodkey piles on the gags and the pratfalls as we follow Charlie and Phil through the trials and tribulations of caring for a bunch of kids.

"Daddy Day Care," with its amiable rags-to-riches story, plentiful sight gags and frequent out-of-the-mouths-of-babes one liners, is going to be a big hit for its star. But, truth be told, the credit for the success of the film is not due to Murphy's performance. The superstar gets to mug for the camera at times but the best of the comedy comes from efforts of Jeff Garlin and Steve Zahn. Newcomer to the big screen Garlin, as the chubby buddy sidekick Phil, plays well off of the star and the kids. Zahn is a natural as a kid-minded fan of super heroes, comic books and all things Star Trek who speaks fluent Klingonese and is the heart of the tiny operation. Murphy does do a good job when called upon to lend his expressive face, especially in one scene, with camera just on Murphy's kisser, as he enters the bathroom after on of his charges, not potty-trained, vacates the premise. The look of horror on Charlie's face, to the shower scene music from "Psycho," is one of funnier Murphy moments.

Angelica Huston is just in it for the paycheck, it seems, but does a yeoman's job as the conniving martinet of Chapman Academy who steadily escalates her private war on her new competition. Just desserts are in store for the malevolent matron. The kids are suitably cute and deliver the from-the-mouths-of-babes lines, as you'd expect.

Production values are typically Hollywood as director Steve Carr, following his "Doctor Dolittle 2" sojourn, musters his behind the scenes crew in straightforward fashion. Art direction (Chris Cornwall) and production design (Garreth Stover) keep things bright and shiny, if totally implausible - note the grandeur of the amusement park fundraiser this guys put on as they are begging for money to keep their school going. Camera by Steven B. Poster fits the bill for this kind of lightweight comedy.