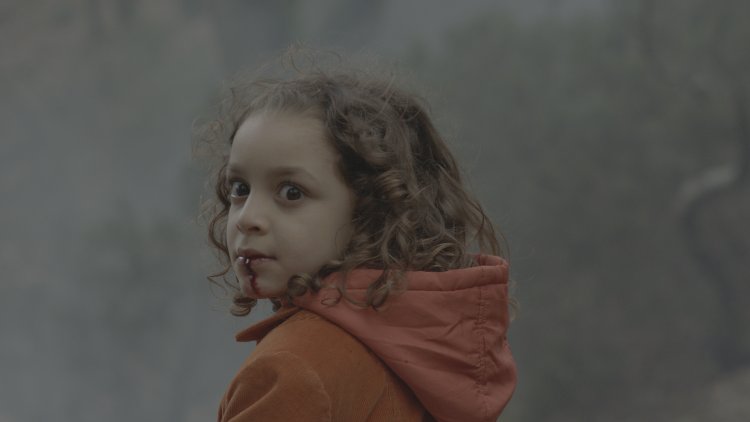 When a college professor assigns his students to produce a filmed investigative report within 15 days, he warns them that they must find a unique subject.  Buddies Yassmine (Yassmine Dimassi), Bilel (Bilel Slatnia) and Walid (Aziz Jebali) are at a loss until the latter tells them about the nurse who is the daughter of one of his mother’s friends.  At the psychiatric hospital where she works there is a woman, Mongia (Hela Ayed), who was allegedly found naked on the side of a road with her throat slit who has terrified hospital staff for twenty years.  When Yassmine questions the worth of a story on a mad woman, Walid suggests they investigate just what had happened to her in “Dachra.”

Tunisian writer/director Abdelhamid Bouchnak bursts onto the scene with a very atmospheric folk horror that weds his country’s witchcraft lore with recognizable Western horror influences while retaining a distinctive Arabic flavor.  Bouchnak and his cinematographer Hatem Nechi exhibit keen eyes for composition, vulnerable bodies shown in overhead shots while violence is handled more impressionistically with quick cutting and indistinct close ups.  The small village, or dachra, where our intrepid trio eventually find themselves, is one of the most disturbing locations in recent horror, its small, square homes nestled together in fog, lines strung among them draped with dripping, ropy meat, cloaked figures gathering ominously at night.

While Yassmine tries to hide her troubling nightmares from her grandfather Béchir (Bahri Rahali), we learn he has concerns she is unaware of.  (Yassmine’s first nightmare houses Bouchnak’s first Western homage, a nod to “Psycho’s” shower scene.)   But while she is both exasperated by and respectful of him, she does not let up on the doctor who tries to tell the threesome there is no patient named Mongia at his hospital nor has he ever heard their story.  They arrange a secret evening visit by paying off the nurse who leaked the story.  In attempting to get the deranged woman to point out where she came from on a map, Yassmine gets too close.  Someone else will pay the price.

The three friends, whose constant bickering is a natural, humorous way to relieve tension (until it isn’t), set off to find the spot where Mongia was found.  Walid calls it and they pull over.  An overly friendly stranger (Hedi Mejri) tries to assist them, but they assure them they are fine (Bilel’s roadside nausea has been mercilessly teased by Walid) and set off into the forest.  Before too long they spot a small girl clad in red who appears to be eating something.  When she turns around, blood streams from her mouth, her wide eyes manic.  She runs, dropping the bird she’d been gnawing at.

It will perhaps be no surprise that that friendly stranger turns up in the village they come to and takes it upon himself to be their host.  They are invited to a meat laden feast, an old crone picking at what appears to be an animal skull.  The young girl runs through, their boisterous host dismissing her as inbred.  He also keeps insisting they spend the evening.  Yassmine frets about her granddad.  They’re told their car tires were stolen.  Eventually they agree to stay in an abandoned home.  A pregnant goatherd approaches Yassmine with a warning, telling her to run.

We can see influences here from “The Blair Witch Project,” “The Texas Chainsaw Massacre” and “Don’t Look Now,” but Bouchnak has his own strong through line contrasting Béchir’s traditional ways against Yassmine’s more modern viewpoint.  There will be two twist revelations in that remote village, one involving the young woman’s past that will reflect upon the other in her present, both unexpected.  The film gets pretty gruesome, but like the best horror directors Bouchnak favors suggestion over explicit gore.  Unfortunately he uses that little girl, Rebeh, too often, like a prop that announces itself, eventually gutting her effectiveness and, I would argue, he takes his film a scene too far, but “Dachra” is a strong debut, artful and eerie.