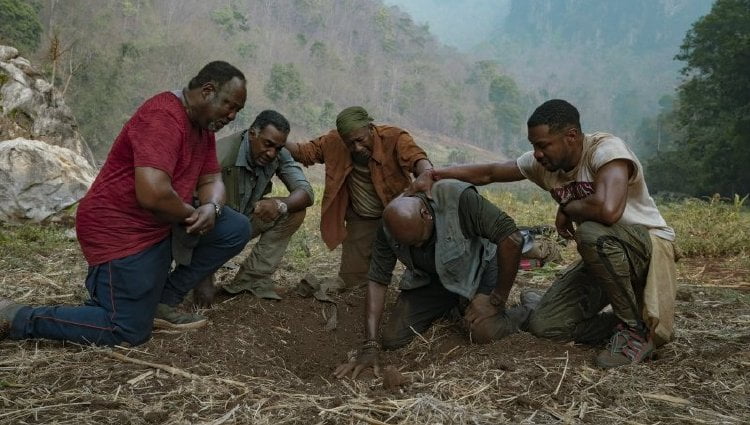 Four Vietnam War vets make the long trek back to that once troubled land to find the friend and comrade they lost and left behind decades ago. But, there is another, more lucrative reason for the four to make the perilous journey in "Da 5 Bloods."

A Ho Chi Minh City hotel lobby witnesses the joyous reunion of former black Vietnam vets Paul (Delroy Lindo), Otis (Clarke Peters), Melvin (Isiah Whitlock Jr.) and Eddie (Norm Lewis), the latter of whom offers to put their tabs on his black AMEX card.  Eddie also has something to show them all, a photograph of Stormin' Norman ("Black Panther" himself, Chadwick Boseman), their squad and spiritual leader whose remains they have come to bring home.  They were “Da 5 Bloods.”

After finally winning an Oscar for 2018’s “BlackKklansman,” Spike Lee is back with a similar mix of tonal changes that veer from comedy to dead seriousness and historical docudrama, this time fictional and leaning on war movie genre conventions.  It’s hard to pin down in its early goings, often seeming almost parodic (when he described his new film as  “Apocalypse Now” meets “The Treasure of the Sierra Madre,” I wasn’t expecting it to be so literal), but once Da 5 are reunited in the jungle, the film coalesces into something powerful.

We soon learn each of the remaining four has his separate issue.  The wealthy Eddie has actually squandered his fortune.  Otis, whose former Vietnamese girlfriend Tiên, a prostitute, is helping them pirate the gold bars that are their second reason for being there out of the country, learns he left family behind.  Melvin is the most carefree, the group entertainer and then there’s Paul, the Trump supporting, MAGA hat wearing member of the group who is carrying a whole lot of secret pain.  Part of that will become immediately evident when his son, David (Jonathan Majors, "The Last Black Man in San Francisco"), arrives unannounced to claim his share of the gold bars hidden in the jungle.

After a night partying at the Apocalypse Now club, the group heads upriver in a tourist boat with their guide, Vinh (Johnny Trí Nguyễn) to the strains of The Ride of the Valkyries (seriously).  Lee narrows his 2.39 : 1 widescreen to the boxy academic ratio for flashbacks which paint Stormin’ as a saintly hero, the squad leader always encouraging his men to do right.  Notably, the men are played by the same actors with no attempt to de-age them, giving these scenes an aura of dreamy memory.  This also has the effect of calling their accuracy into doubt.

After trudging through the jungle, both the gold and Norman’s remains are found, but the group also crosses paths with Vietnamese officers who believe the lucre is theirs and the three mine clearance volunteers (Mélanie Thierry, Paul Walter Hauser and Jasper Pääkkönen) the bloods crossed paths with in the city.  “Sierra Madre” permeates this section of the film even before its ‘stinking badges’ line is uttered.   It’s no surprise that Tiên’s French export contact  Desroche (Jean Reno) has his own agenda.

Lee does perhaps too much here, but he resolves his bloods’ separate stories with emotional truth, Lindo’s Paul the film’s strongest player with the movie’s most complex arc.  Black Lives Matter raises its head with the film’s running theme of vigilante reparations, the purity of Norman’s vision twisted over time by some he left behind.  Colonialism’s ties to the American black experience come through loud and clear, these American soldiers having no animosity toward the Vietnamese they were sent to fight by a white establishment that will fail to repay them.  We see how America’s enemies use our racial injustice to undermine us via Hanoi Hannah (Veronica Ngo), a ploy still exploited today (see Paul’s MAGA hat).  The more general effects of war on families are reflected in Paul’s twisted relationship with his son, emotionally resolved, and by Otis’s discovery, unknown past hardships soothed by their recognition.  The film’s last forty minutes (it runs 154) are its most powerful.  Lee’s still tugging at his two influential films (Melvin’s conclusion of madness recalling Brando), but their significance has become more organic.

The film was shot in Southeast Asia, so there is none of that fakery of California shoots – we see the sights of Saigon and the jungle is authentic.  The soundtrack features ‘Time Has Come,’ used before in Vietnam films like “Coming Home,” as well as Marvin Gaye tunes, but Terence Blanchard’s horn based score is overbearing and contributes to the clichés that initially haunt the film (some to good effect, as if Lee is paying homage to the war films he watched in his youth, some not, signaling too obviously what is about to transpire).  In its later goings, Paul breaks the fourth wall, speaking to us directly, but I did not detect Lee’s signature double dolly shot here.

Like “BlackKklansman,” the film is bookended with historical documentary footage, Mohammed Ali telling us why he declines to fight, Martin Luther King haunting the proceedings.  “Da 5 Bloods” is a big, sprawling, ever changing epic that lands with the force of a bomb.

Pete (Delroy Lindo), Otis (Clarke Peters), Eddie (Norm Lewis) and Melvin (Isiah Whitlock, Jr.) meet at the airport to begin their journey, one of both great distance and a great deal of time. The four brothers are making the trek to fulfill a pact they made, with Norman, 50 years ago. Once back in-country they begin their secret mission, traversing the rugged and beautiful land, starting in Ho Chi Min City (formerly Saigon). (There is a bit of travelogue in “Da 5 Bloods.)

As I said, this is a Spike Lee Film. You see the Lee film quirks that are unique to the filmmaker. Watch “Da 5 Bloods,” if you are familiar with his work and you will see what I mean. There are clichés, many, as Lee makes his many points, like Black Lives Matter, racial inequality, both here and in Vietnam, PTSD, drug addiction and other serious issues.

The story, with its four contributors, feels at times like a committee effort as they chronicle the journey that travels from the rivers of the massive Mekong Delta in the south to the rugged highlands of the North. It is an arduous journey fraught with danger but one the four are willing to risk, each for their own reasons.

This is true ensemble film with the five bloods and their brotherhood the focus of the film. Stormin’ Norman, their leader in battle, may have been lost to them a half century ago but he has always been a member of the 5 Bloods. As always, Spike wears his heart on his sleeve and it is a mark of his films.