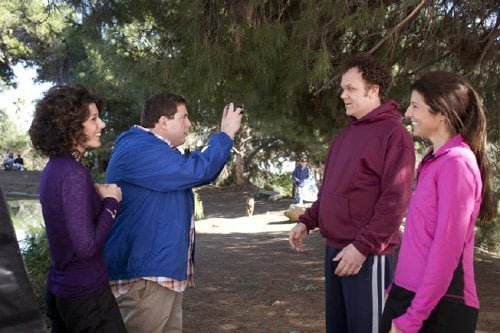 Freelance editor John (John C. Reilly, "Chicago," "Step Brothers") has been desperate and depressed ever since getting divorced from Jamie (Catherine Keener, "Where the Wild Things Are," "Please Give") six years prior. When she tells him she's getting remarried, he goes into even more of a funk, so she and her fiance Tim (Matt Walsh, "The Hangover's" ER doctor) force him to go to a party. John's dazed when he meets Molly (Marisa Tomei, "The Wrestler"), a hot chick to his Shrek, and although she seems to like him as much as he likes her she seems to be hiding something. That something turns out to be her 21 year-old pathologically dependent son, "Cyrus."

Writer/directors Jay and Mark Duplass ("The Puffy Chair," "Baghead") leave the mumblecore scene to make their studio debut with their own warped take on a familiar theme and succeed largely due to the skills of their imaginatively cast male leads. John C. Reilly's remarkable range is a known factor, but here he blends his comedic skills with his warmth for a new mix. Jonah Hill simply goes to some very new places that can be as scary as they are funny. The Duplass brothers choose a unique way to introduce John. A concerned Jamie stops by his small ranch home. There's an ominous thumping on the soundtrack. There are lights on, but no response to the doorbell. Jamie lets herself in. Jas Shelton's hand held camerawork adds to the suspense - are we walking into a murder or suicide scene here? Then the embarrassing/funny reveal of a 'preoccupied' John in his bedroom with headphones and little else on. The introduction perfectly describes where this character currently is. At the party, he needs to be goaded into trying to talk to someone, fortified with a cup of vodka and Red Bull. His efforts are inept, so he continues to drink. That Molly can joke about his peeing in a bush is a fresh flag. She also responds to his childishly exuberant reaction to Human League's "Don't You Want Me Baby," proof that he can, indeed, be the life of the party. His utter openness washes away any disbelief in the physical mismatch. When John later clandestinely follows Molly to her home and starts sneaking around after he sees her leave the next morning, he's confronted by Cyrus (Jonah Hill, "Get Him to the Greek"), who invites John in despite the awkward introduction. Cyrus seems reasonable, in a stilted, bright-eyed kind of way, until he offers to play some of his music for his guest. Hill is brilliant conveying Cyrus's belief in his own genius as he offers bombastically mediocre musical output. When Molly arrives home and, not seeing John, shimmies towards her son professing his talent, we learn their whole world. It seems as though things are just fine, in a weird kind of way, but warning signs abound - that picture Molly keeps on her bureau of her breast-feeding her son at an inappropriate age, Cyrus's casual entry into a bathroom where his mother is showering, John's missing Nikes. Finally, suspicions become truths and war is declared with Molly none the wiser. The Duplass brothers are known for their improvisational style, both in their writing and the technical aspects of filmmaking, so its hard to know just how much the actors added, but the central trio have a great dynamic. Tomei plays Molly straight, with a hint of awareness that her relationship with her son is abnormal that's forgotten when John appears to accept them. All three characters have strong arcs as well, each ending up in a very different place than where they began, all growing up in their own way. Reilly's decency is touching and Hill's malevolence is thrilling (the actor uses body language to elicit sympathy near film's end0. It is a testament to the Duplass's filmmaking skills that they maintain an even tone with such a strange mix. The dependable Keener provides John with a counterpart to Molly's emotional home base. As her new fiance, Matt Walsh is the audience POV into the insanity. Production values are modest, giving a good sense of East L.A. neighborhoods. The high def cinematography is more notable for its movement than for its look. The sparingly used score (Michael Andrews, "Me and You and Everyone We Know," "Funny People") slyly works in synth notes, tying it to Cyrus's compositions. "Cyrus" is a witty relationship comedy about maneuvering through fundamental connections in order to form new ones. Hill shows off new facets in this gem of an ensemble.