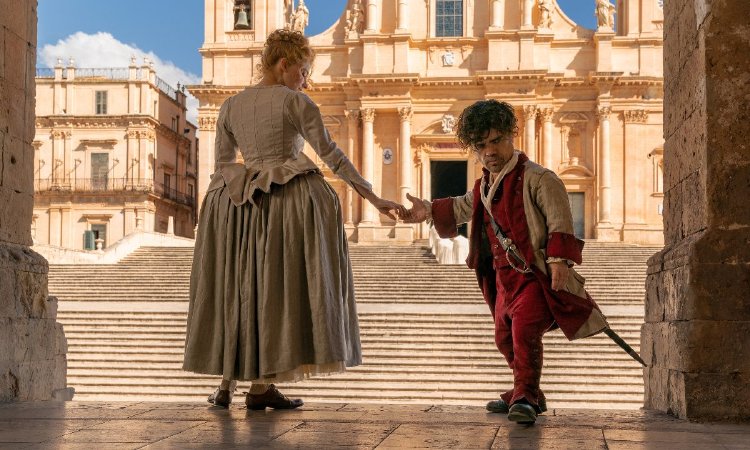 The beautiful but penniless Roxanne (Haley Bennett, "The Girl on the Train," "Swallow") despises the Baron De Guiche (Ben Mendelsohn, "Animal Kingdom"), but puts up with him for such financial benefits as tickets to a play she wishes to see.  At the theater, she falls in love at first sight with young guard recruit Christian (Kelvin Harrison Jr., "It Comes at Night," "Luce"), much to the dismay of the lifelong friend afraid to declare his feelings because of his dwarfism, the man who will woo her for Christian in letters, “Cyrano.”

This marks an interesting cross connect between stars and their behind-the-scenes significant others.  Peter Dinklage’s wife Erica Schmidt adapts her 2018 musical stage version of the Edmond Rostand classic which was seen by the film’s director Joe Wright ("Atonement," "The Woman in the Window") because it also starred his wife, Haley Bennett.  Of the four, the clear winner is Dinklage, whose heartbreaking performance goes a long way toward distracting from the film’s flaws.

It must be said – despite her beauty and admirable vocal ability, Haley Bennett’s Roxanne is not a very sympathetic character, at least not until she receives a dire threat from De Guiche in the film’s latter half.  Schmidt’s take on “Cyrano” dispenses with the oversized schnozz, instead highlighting a more universal human condition of feeling one does not deserve love.  But in so doing, it is the relationship between Cyrano and Christian where the emotion is mined here.  Both men are surprised to find their love for the beautiful Roxanne reciprocated, but when Cyrano realizes he has misread his beloved, he mentors his rival to ensure her happiness.  Likewise, when Christian realizes the truth, he makes a noble sacrifice, so sure is he of Roxanne’s purity of heart and true love for Cyrano.  It is telling that the film’s best scene features Dinklage and Harrison Jr., with Bennett reading letters far away off screen.

As the audience gathers for that play starring Montfleury (Mark Benton), Cyrano (Peter Dinklage) heckles the pompous actor as unfit for the stage, inspiring laughter from many (Roxanne hides her appreciation of Cyrano’s wit) and outrage from the elite, one of whom, De Guiche’s simpering friend Valvert (Joshua James), challenges him to a duel on stage after Montfleury has departed in a panic.  Underestimating his opponent, Valvert falls on the man’s sword.  As Cyrano leaves with Captain Le Bret (Bashir Salahuddin, "Snatched")      , Roxanne’s maid Marie (Monica Dolan, "The Dig") delivers a message that her mistress wishes to meet in secret early the next morning, sending his spirits soaring.  This may be what gives him the power to take out the ten men who accost him as he walks alone, De Guiche attempting retribution against a member of his own guards for the loss of Valvert.

The opening is full of swash and buckle, beautiful period costumes and the honeyed limestone of baroque Sicilian architecture, its one misstep the distinctly feminine choreography of the company of guards.  But while the film’s midsection remains true to Rostand’s source material, with Cyrano speaking for Christian in the dark beneath Roxanne’s balcony, one is left with the impression of a perfume commercial where a beautiful woman is showered with letters amidst billowing fabric, demanding to be adored.  Dinklage, however, is phenomenal, his face radiating adoration and indulgence with Bennett, frustration and piqued resignation with Harrison Jr.

The film’s best scene occurs after De Guiche, angered by Roxanne’s manipulations, sends both men to war immediately upon Roxanne and Christian’s unconsummated marriage.  Filmed in the high, snowy altitudes of Sicily’s Mt. Etna, the stark scenery is desaturated of almost all color by cinematographer Seamus McGarvey, a stark contrast to the warm tones of Roxanne’s environs.  When Le Bret receives orders from De Guiche that amount to a death sentence, the soldiers all ‘write’ home, expressed in the film’s best song,  ‘Wherever I Fall’ by Glenn Hansard, Aaron Dessner and Víkingur Ólafsson.  It is here that Christian discovers what he has come to suspect about Cyrano’s true feelings, Harrison Jr. and Dinklage sharing an emotionally affecting exchange.  Bennett finally gets her opportunity in the film’s last scene, a ‘three years later’ coda, but once again Dinklage delivers the final heartbreaking twist with the film’s last line.

“Cyrano” boasts a distinctive production and fine cast, but in attempting to redefine Cyrano, Schmidt has left Roxanne underwritten.  With the exception of the soldiers’ lament, musical duets fare better than large scale song and dance, which feel inorganic.  The cast is not to be faulted, Bennett, who learned how to sing for the stage production, luminous.  It is a shock to see Kelvin Harrison Jr. all grown up after his teenaged roles and he makes Christian an admirable, honorable man, more than just a pretty stand-in for Cyrano.   Mendelsohn, who affects his villainy with a slight lisp, looks like a Deatheater in his swirling black cloak striding up the misty streets.  But it is absolutely Peter Dinklage who makes the film memorable, Wright giving us a moving visual echo of that soldiers’ song for his last scene.

Cyrano (Peter Dinklage) is a brave soldier, fearless swordsman and skilled wordsmith but he cannot do one thing: declare his secret love for his best friend, the beautiful Roxanne (Haley Bennett). Instead, she fell in love at first sight with the handsome but awkward Christian (Kelvin Harrison Jr.) in “Cyrano.”

If I were to really sit down and think about a hundred or so of the films I would consider “the best,” I believe that “Cyrano de Bergerac (1950),” starring Jose Ferrer, should have a permanent spot somewhere on that list. So, with very large shoes to fill, I compare Joe Wright’s cut at the Cyrano story, starring the diminutive-in-size but a giant talent on the screen Peter Dinklage.

We meet Cyrano as he “critiques” the performance of an actor he thinks little of and demands he leave the stage. He is challenged by the actor’s aristocratic patron, an expert swordsman, too. Cyrano dispatches his opponent with fluent expression and the tip of his very sharp blade.

Then, we meet Roxanne. Haley Bennett is certainly beautiful and, if she does her own singing, has a very fine voice. But I have a major problem with this Roxanne: she is narcissistic, vain, selfish and quite obtuse in her observations of the men in her life. She is a beauty over substance kind of girl. As such, I question both Cyrano and Christian for not seeing that.

Which brings me to where “Cyrano” works best – the reluctant friendship that develops between the title character and Christian. There is a connection between the actors as you watch Cyrano bite his tongue, so to speak, as he plays the romantic go-between for Roxanne and Christian. Oddly, the two men have more chemistry between them than either has with Roxanne.

One thing I have to warn about. This is a musical. I do not mean a musical like “All That Jazz” or “West Side Story” (either version). I mean like the overly choreographed and bombastic “Oliver!” with its elaborate dance numbers and songs. In “Cyrano,” the songs are mostly repeats of other overblown musicals, at least in sound. There is one stunning exception, a soldiers’ song by the warriors as they prepare for battle and face near-certain death. It is a moving piece, both in words and its execution.

There is an amusing line as Cyrano helps Christian write what he feels for Roxanne, Cyrano says, “I’ll make you eloquent if you make me handsome.” I think this is from the ’50 film or the original play and and references Cyrano’s enormous nose. Here it is ironic in that I think Dinklage is a darned handsome man, so it might be an inside joke.

The film looks stylish and costuming varies from elegant to shabby. I could have done with more music like the soldiers’ song and less insipid love songs – and less “period” dance.