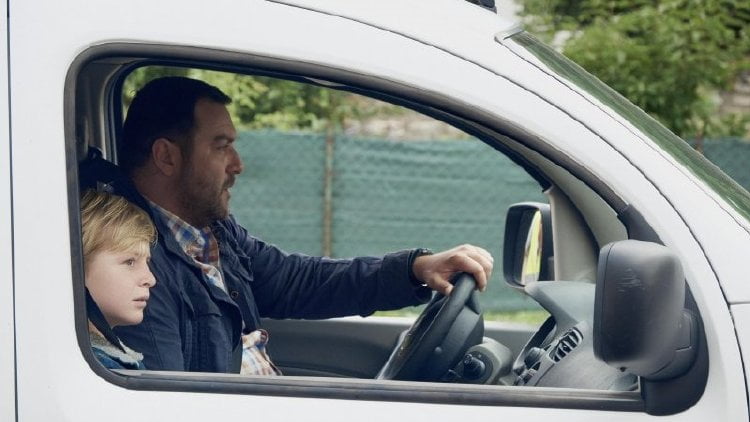 A judge reads 11-year old Julien Besson’s (Thomas Gloria) statement saying he is afraid of his father, Antoine (Denis Menochet), and does not want to be with him. The court decides, against the advice of mom Miriam’s (Lea Drucker) lawyer, and Antoine is given visitation rights. After all, Antoine is a good, hardworking man liked by his colleagues. But, that is not the real man who demands “Custody.”

In 2013, actor Xavier Legrand made his directorial debut with a phenomenal, Oscar nominated live action short about Miriam (Léa Drucker), a woman trying to escape abusive husband Antoine (Denis Ménochet, "Inglourious Basterds") with her two children. He returns with his feature debut, reuniting three of his stars from "Just Before Losing Everything" to continue their story as Antoine continues to try to exert control over Miriam by fighting for "Custody." Legrand's opening might remind one of the films of Asghar Farhadi as a judge (Saadia Bentaïeb, "BPM") faces forward to inform us that she is about to read the statement of Julien Besson (Thomas Gioria), the eleven year-old whose fate is being decided. We are told that the information must be shared with both parents for due process and that Julien was advised that if he did not want his comments to be heard by both, he should not make them. Nonetheless, we hear the child describe his father as 'that man' who wants to hurt his mother. The camera's POV shifts, so that we see Miriam and Antoine sitting side by side with their lawyers, staring straight ahead. Miriam has submitted a school nurse's report identifying an injury to her eighteen year-old, Joséphine (Mathilde Auneveux, "Just Before Losing Everything"), at the hands of her father. Antoine replies that it was a gym injury and that the children's mother is poisoning them against them. The judge listens, says one of them is clearly lying and that she will deliver her verdict to the couples' lawyers. After this expository opening, Legrand leaves us to read between the lines observationally, as he did in his short. Miriam's having difficulty with Joséphine cutting classes to see her boyfriend Samuel (Mathieu Saikaly). She's also looking at a new apartment to get out of their temporary arrangement at her parents' house and it is there that she receives a phone call which obviously disappoints her. The next thing we know, Antoine's white van is parked outside and Miriam is refusing to send out Julien because of illness, the boy curled up in a fetal position. Julien, his face a mask of tension, marches out like a little soldier when Antoine threatens to file a complaint. Antoine is all bulk and dead eyes, but puts on a show of accommodation, calling his son 'sweetie.' Julien flinches. Julien is determined to shield his mother at all costs and a fierce game between he and his father disgusts even Antoine's own father, who tells his son he is no longer welcome. Unfortunately Julien's grandmother has unwittingly provided some information which leads her son to his wife's new doorstep. With Julien's attendance at his own sister's eighteenth birthday party used as a negotiating tool by his father, we watch in horror as the inevitable violence builds steam. Legrand is masterful escalating anxiety. As Julien's defenses are overpowered, focus shifts to Joséphine's party. As she gets on stage to sing 'Proud Mary' to attendees in the hall, we, and she, watch comings and goings as Miriam, Miriam's sister and other adults exit and return, tension becoming unbearable and unspoken as 'nothing' happens, until the expected does, away from party-goers eyes. And still, Antoine is not done. Drucker is subdued here, a woman attempting to move her life forward while each step she takes could be onto a landmine. Her Miriam is closed down in fear. Ménochet is all brute powerlessness simmering to blow. His performance is terrifying and recognizable. While Auneveux largely represents the 'untouchable' daughter, Gioria does the heavy lifting, the young actor expressing fear, manipulation and rebellion, a brave young soul facing incredible odds. While Legrand immerses us in his characters' situations, he brings in another outside party, this time a neighbor, to witness and get help for the horrific consequence of the judge's decision. The film ends on a closing door, a stark reminder that domestic abuse is hidden from view, surface behavior often in stark contrast to what happens when no one is looking. Grade:

I have been here before, and I do not mean that the film, by Xavier Legrand, is a cliché and remanufacturing of other family breakup movies. His first film, the Oscar-nominated 2013 short, “Just Before Losing Everything,” which also stars Lea Drucker, walks a similar story about a mom and her two young kids trying to escape the clutches of a brutal, abusive husband. “Custody” takes the broken marriage story and, in a way, makes it a monster tale. Antoine has “changed,” or so he says as the judge decides that a boy needs to be with his father. Miriam knows, and so do I, that her ex’s pillar of virtue testimony is a sham. Julien, wanting to avoid further conflict for his mom, agrees to his father’s visit rights. I know things are not going to go well for the Besson family as writer/director Legrand foreshadows all the events that will be the climax of the film. I figured, early on, what would happen (I take notes) and there were no surprises. That said, while the story is somewhat clunky, the three stars – Lea Drucker, Denis Menochet and young Thomas Gloria – are all terrific in their complex roles. Thomas Gloria, in particular, captures both sympathy and empathy as the boy caught in the middle in the irresistible force versus the immovable object struggle of his parent’s war against each other – Miriam battles out of love for her son and daughter and to protect them; Antoine fights out of hateful spite, with nothing but false love for his estranged family. He is a monster, especially in his son’s frightened eyes. This trio of performances makes up for the predictable script. The monster story, though, kept a knot in my gut for the whole film.