Curse of the Golden Flower 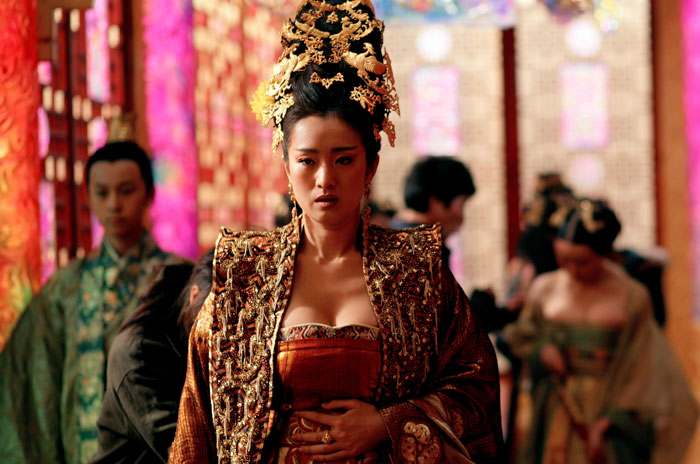 During the waning days of China’s Tang dynasty, the Emperor (Chow Yun Fat) returns home from the latest war along with his number two son, Prince Jai (Jay Chou). His arrival does not evoke the warm reception from the Empress (Gong Li) that he expected. Though she is happy to see Jai, her marriage has fallen cold and she has taken a lover: Crown Prince Wan (Liu Ye), the Emperor’s son from his first marriage. The Emperor’s solution to his failed marriage is to have the Imperial Doctor (Ni Dahong) administer a special drug that will gradually drive the Empress mad. This familial intrigue, though, will have a devastating impact on the royals and their empire in “Curse of the Golden Flower.”

Maestro director Zhang Yimou has an eye for spectacle and, with the freedom of CG imaging, he creates an incredible world of epic proportions amidst the spectacle of period intrigue. We know the lead characters, Chow and Gong, only as the Emperor and Empress and the subtle, deadly battle they wage consumes them, their sons and those closest to the throne of power. The story, adapted by the director from the play by Yu Cao, is more geared to the complicated palace intrigue than to individual characters. The personas of the Emperor and his court are symbolic rather than flesh and blood but the excellent cast gives them credence, something that would have been lost under a less experienced hand. You never really embrace the characters in their rarified world but, still, they are uniformly interesting. Chow and Gong show their chops, as expected, and the rest of the ensemble – Liu Ye as the Crown Prince and long time amour to his stepmother; Jay Chou as the capable number two son; Qin Junjie as the underrated number three son, Prince Cheng; Man Li as the crown prince’s newest lover, and the Empress’s rival; and, Ni Dahong as the plotting Imperial Physician – give nice dimension to their characters in this elaborate soap opera. Technically, this is a tour de force with a digital cast of thousands created to fight the enormous battles. The computer graphic clashes look a bit too video game-like but are eye-popping nonetheless. Exquisite costume and jewelry (Chung Man Yee), lavish production design (Tingxiao Huo), intricate, varied camera work (“House of Flying Daggers” DP, Xiaoding Zhao) and an international special F/X crew are all first rate. The script lacks the lovely romance of “House of Flying Daggers” and this makes the story colder and more clinical than Zhang’s previous spectacle. Still, it is a fascinating tale of palace intrigue and the machinations of power play. The helmer proves, once again, that he is a world-class filmmaker.