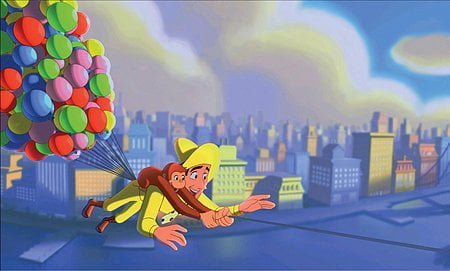 Junior Bloomsbury (David Cross, TV's "Arrested Development") has long been jealous of his dad's attachment to museum lecturer Ted (Will Ferrell, "The Producers), so when the museum's dire financial straits necessitate its closing, Junior hopes to nudge Ted out with his proudly proposed parking garage. But Ted reminds Mr. Bloomsbury (Dick van Dyke) of his long held ambition to find the Lost Shrine of Kagawa and its potential to turn the museum back into a major attraction. Bloomsbury now being too old, the unadventurous Ted finds himself cast as African explorer wearing a canary yellow hat that attracts the attention of "Curious George."

Proving once again that it is way too early to declare the demise of 2-D traditional animation, "Curious George" is charming in its simplicity and puzzling in that it has taken six decades to be adapted for the big screen. Disney animation vet Matthew O'Callaghan ("Mickey's Twice Upon a Christmas") pushes color and character over visual artistry, but George proves a big enough star to carry his first feature (adapted from the beloved children's books of Margret and H.A. Rey). Having unknowingly been sabotaged by Junior, what Ted thinks he's found as the lost shrine is only a tiny key to the real one's presence and once again the museum looks doomed. Making matters worse, George stowed away and finds Ted in the big city, determined to continue their game of peek-a-boo, but George's mischievous ways and a strict no pet policy in Ted's building lands the duo on the street. George's curiosity unleashes something in Ted, though, making him more courageous, and George's curiosity is also good for something more - the most surprising solutions to their problems. The style of animation used here is almost anti-style it's so flat. Backgrounds are static, but compositions and editing can be pleasing, such as the matched shot fade from jungle to big city or the overhead view of George tailing Ted from multiple stories higher through the city's streets. George is drawn to primary color, so in addition to Ted's gauche yellow suit (he's rooked by salesmen who tell him 'yellow is the new khaki'), there are plenty of paints, balloons and other colorful objects. The introduction features a clever bit where George taunts a chameleon until it becomes a kaleidoscope of color and there's a cute homage to "King Kong." "Curious George" features the now de rigueur voice casting of famous actors, although only Drew Barrymore as Ted's schoolteacher love interest is really recognizable. Joan Plowright ("Bringing Down the House") divas it up as opera singer Miss Plushbottom but her "House" costar Eugene Levy does little to distinguish Clovis, the inventor. Will Ferrell ("The Producers") is restrained as Ted, a character who sometimes verges on annoyance with his loser ways (the character was named for this film, having been known in the books only as 'the man in the yellow hat'). Dick van Dyke makes the elder Bloomsbury an endearing old dodderer. veteran voice actor Frank Walker provides the delightful cooing and wooing George makes, a good choice sounding more like the sounds of a happy infant than a raucous chimpanzee. Perhaps "George's" biggest letdown are the original songs by Jack Johnson, which are too laid-back, granola hippie-dippy to suit the material. The songs, in fact, reminded me strongly of Carly Simon's work for the Pooh features, but those fit their material like a glove. These do not. "Curious George" is simple and sweet. It's an old fashioned family treat.