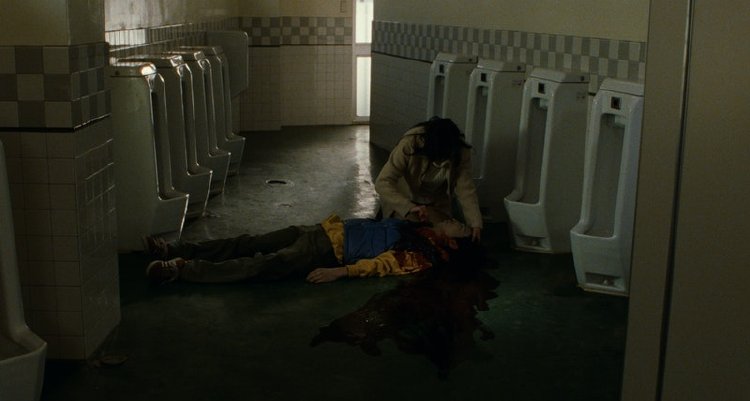 Detective Kenichi Takabe (Kôji Yakusho, "Shall We Dance?") arrives at the blood-splattered murder scene of a prostitute and notes the X carved into her throat.  But that is not the strangest thing he finds.  A neatly folded pile of men’s clothes is topped with a wallet, including Ichirô Kuwano’s (Yukijirô Hotaru) ID.  He himself is found naked, crouched inside a cabinet with no idea why he committed this murder, the third such instance among unrelated perps with the same MO in “Cure.”

Janus Films has done a 4K restoration on writer/director Kiyoshi Kurosawa's (“Pulse,” “Creepy”) 1997 classic, one of the films which kicked off the J-Horror movement.  Kurosawa’s film leans more heavily into psychological horror and existential dread than paranormal spooks, emphasized by the isolation production designer Tomoyuki Maruo and cinematographer Tokushô Kikumura introduce with long shots of figures in sterile industrial locations and a windswept beach.  “Cure” also advanced Kurosawa’s stature from a director of ‘pink films’ with his casting of star Kôji Yakusho.

We’re privy to the next suspect’s interaction with Kunio Mamiya (Masato Hagiwara), a shaggy haired young amnesiac who always asks to smoke and turns every question about himself into a query about his questioner.  Kindly schoolteacher Tôru Hanaoka (Masahiro Toda) brings Mamiya home from a walk on the beach and mention of his wife, Tomoko, sleeping upstairs envelops us in dread.  Soon enough, he’s being questioned by Takabe, having no idea why he murdered the woman he loved other than it seemed the right thing to do at the time.  By the time we notice how pointedly Mamiya directs the flame of a lighter at a policeman, Oida (Denden, "Cold Fish"), Takabe’s asking a psychologist about the possibility of hypnotic suggestion to kill.  While the professional claims hypnosis would not overrule a person’s moral compass, Takabe’s investigation into Mamiya, a psychology student whose landlord hasn’t seen him in six months, reveals a man obsessed with psychological extremes and the work of Mesmer.

As Takabe begins to circle Mamiya, Kurosawa ladles on more and more tension.  When the young man is interviewed by Police Commandant Fujiwara (Ren Ôsugi, "Audition") with Takabe and other officers present, the director accompanies the scene with an audible thrum like a sped up dripping noise (when Mamiya is thwarted from using his lighter, he’ll take advantage of water as seen when he’s examined by Dr. Akiko Miyajima (Yoriko Dôguchi, "Silence")).  There is also the case of Takabe’s wife, Fumie (Anna Nakagawa), a fragile woman Takabe will label a ‘burden’ when goaded by Mamiya, the question of her safety haunting the final act of the film.

Although “Cure” features some grisly murder scenes, it upends the usual dynamic of the cat and mouse serial killer movie with its viral mind games, a concept which would haunt later films like Kurosawa’s own “Pulse” and Hideo Nakata’s “Ringu.”  The film has a chilly elegance to it, exemplified by the film’s last scene, a repeat of an earlier one with one startling difference.