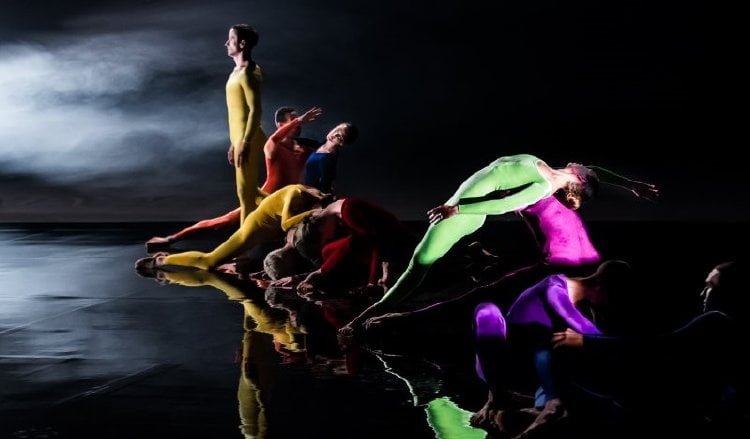 Merce Cunningham, for 30 years, was a dancer, choreographer and long time collaborator with composer and partner John Cage and visual artist Robert Rauschenberg. While the maestro was known for his “interpretive” dance, he left the interpretation to his viewers and we see that dance evolve in “Cunningham.”

Not to be confused with Bill Cunningham, the recently deceased NYC street fashion photographer, Merce was a dancer/choreographer/company founder dedicated to ‘extending movement’ who created 180 dances from the mid ‘40’s right up until his death at 90 in 2009. The artist who refused to be pigeon-holed was “Cunningham.”

Writer/director/editor Alla Kovgan gives the bulk of her film over to fourteen of Cunningham’s works up through the early 70’s chosen to illustrate his defining artistic principles. Shot in 3D by Mko Malkhasyan (but reviewed here in 2D) with the Merce Cunningham Dance Company just as it was disbanding in 2011, the dances are staged indoors and out, in a forest, on a NYC penthouse rooftop and against Cunningham and composer/life partner John Cage’s frequent collaborator Robert Rauschenberg’s pointillist backdrop/set designed for Summerspace, in which it was noted that if the dotted costumed dancers paused they would ‘disappear into the background.’ The movement, or lack of it, merges with the space.

Most of these pieces are mesmerizing, Cunningham’s distinctive movements (he combined classical ballet for the legs and modern dance for the torso, incorporating offbeat, idiosyncratic footwork) interpreted by his individual dancers in earlier years (as seen in archival footage) smoothing out into company uniformity later. One of the most distinctive works is an early rotating presentation of individual dancers, all seen at once, all performing different works, as we listen to Cunningham describe the risk of performing something that he didn’t wholly know about in advance. Lighting often washes over the space, creating the effect of dancers on a highway in Winterbranch or partially illuminating and reflecting vibrantly colored leotards.

But is the lighting Kavgan’s or Cunningham’s? It’s not something Merce Cunningham mentions, however much he talks about collaborators like Cage, Rauschenberg, Andy Warhol and Jasper Johns. Cunningham rejects labels like avant-garde and refuses to connect dance to mood or even music, yet his use of a stopwatch to choreograph, a controversial practice which many believed rendered his works cold, clearly depends on a beat. Kovgan uses the dancer’s own notes and graphs overlaid on multiple frames and split screens to keep historical imagery engaging, but Cunningham’s work speaks more clearly than his words.

Cunningham lived on the edge for years, scavenging for firewood on the streets of NYC, his unusual ideas perplexing general audiences, but drawing artists. Rauschenberg notes ‘We have only two things in common -- our ideas and our poverty.’ His early company is described like a traveling commune (they went on tour in a minibus) whose performances could earn tomatoes in Paris and bravos in London.

Kovgan discusses her use of 3D in the press notes as if this were dance documentary innovation, neglecting to mention Wim Wender’s stunning 2011 multidimensional work on choreographer Pina Bausch (“Pina”), but her passion for her subject is evident throughout. Still, while Cunningham’s work is brought to vivid life, the artist himself remains something of an enigma.

I have to admit that my knowledge of Merce Cunningham and his work is limited (if none). So, I watched this concise and exciting chronicle of the artist’s life and achievements with a fresh, untarnished eye. I have, all of my adult life, been fascinated by the human form and movement. Watching Merce Cunningham, and others, perform his choreographed dances fueled that fascination with the precision, grace and beauty that the human body can be.

“Cunningham” was originally shot in 3D and, as I watched the film in 2D, I could see the machinations of the camera as it swoops around, over and through the modern, multi-dancer interpretations of the artist’s works. (Watching in 3D is not a requisite.)

There is a distinctive similarity between this dance documentary by first-time feature director Alla Kovgan and the beautifully rendered 2011 documentary by Wim Wenders, “Pina,” about another famed choreographer, Pina Bausch. I actually saw the Wenders film in 3D and, with the beauty, talent and grace dance also on display, the three-dimension gimmick is not necessary. The two films complement and bookend each other elegantly. It is all about the dance.