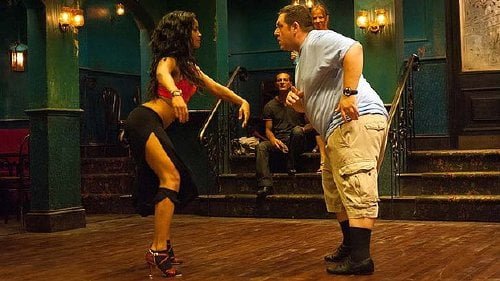 In 1987, the UK's star salsa instructor Ron Parfait (Ian McShane, "Sexy Beast," HBO's 'Deadwood') had his hopes dashed when his protege failed to show and take the UK Salsa Championship. Unbeknownst to him, the 13 year-old with 'fire in his heels' had been beaten by a gang of bullies and abandoned his passion, agreeing that 'salsa is for pussies.' Twenty-five years later, the now severely out of shape Bruce Garrett (Nick Frost, "Shaun of the Dead," "The World's End") is a single industrial engineer whose closest colleague, Drew (Chris O'Dowd, "Bridesmaids," "The Sapphires"), constantly mocks him. But when they're introduced to their new American boss, the shy Julia (Rashida Jones, TV's 'Parks and Recreation'), a rivalry begins and when she's revealed to be an amateur salsa fan, Bruce must regain his "Cuban Fury."

Comic actor Nick Frost harbored an idea for a number of years before pitching it in a late night drunken email to his long time producer. Unfortunately she ran with it. "Cuban Fury" is entirely based on the concept that Frost dancing in Cuban heels and sequined shirts is funny. It's padded out with a string of worn out cliches (Misconstrued homosexuality? Check. The cad vs. the schlubby nice guy? Check.) by television writer Jon Brown and given lackluster direction by James Griffiths, also stumbling onto the big screen. It speaks volumes that the film's funniest moment is a scowling Simon Pegg in a few second long parking lot cameo. Bruce spends his down time with his horndog married mate Gary (Rory Kinnear, "Skyfall") or visiting his cocktail waitress sister and former dance partner Sam (Olivia Colman, "Tyrannosaur," BBCA's 'Broadchurch'). At work, he harassed by reception over his collapsible bicycle and taunted by Drew, who's got his knives out for the introduction of their new boss. When Julia turns out to be a babe, Drew quickly changes his tune, but while Bruce has a clickable moment with her, he knows she's out of his league. After she hits him with her car, though, he discovers her love of salsa and thinks he may have a fighting chance, so he hunts down Parfait to get his Latin mojo back. The old instructor's fallen on hard times since he lost his chance those many years ago so he's not about to make things easy, pitting the rusty Bruce against a real firecracker. Humbled, Bruce goes back to square one and picks up an unlikely champion in flamboyantly gay student Bejan (Kayvan Novak, "Syriana," "Four Lions"). With bits and pieces from better movies like "Shall We Dance?" and "Roxanne," "Cuban Fury" proceeds with Frost in baggy shorts, black socks and heeled dance shoes as the height of comic invention. Frost has always been likable and is adept with physical comedy, but cinematographer Dick Pope ("Happy-Go-Lucky") does meat and potatoes work here, doing little to hide the fact that Frost is not, in fact, a better than or even average dancer. Jones, also likable, merely recycles Ann Perkins and O'Dowd's funny goes missing when cast as a bad guy. McShane's a bright spot in a dim project, but Novak's an unintelligible cartoon and Kinnear's only around to mistake him for his best friend's new lover. "Cuban Fury" is like a new sitcom with a great cast that's so badly conceived and executed it's yanked after two episodes. Only the genuine sweetness between Frost and Jones and McShane's wacky casting make this film remotely bearable.