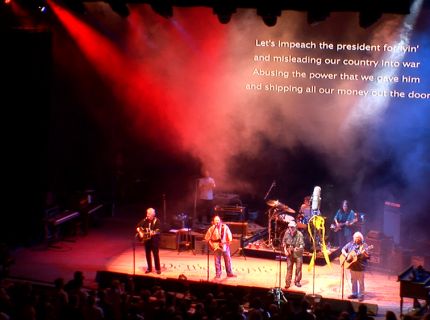 In 2006, David Crosby, Steven Stills, Graham Nash and Neil Young crisscrossed the country with their Freedom of Speech” tour in protest of the ongoing Iraq War. This is not the first time that the band has been at the front of war protest, if you think back to their seminal song “Ohio.” It is a different war and different time and the band rock ‘n’ rolls with it in CSNY Déjà Vu.”

When Neil Young got his old bandmates - David Crosby, Graham Nash and Stephen Stills back together to protest the Iraq War via song in 2006's Freedom of Speech tour, director Bernard Shakey (aka Neil Young) thought it would be a great opportunity to document the event, get the public pulse, compare this new war to the Vietnam war that CSNY crusaded against back in the 1960's. The result is a mix of music and politics, outrage and respect, past and present that is both thoroughly entertaining and reflective. Young uses a split screen to parallel the 60's with today in a very effective double montage. David Crosby implicates Young as the clear ring leader, remarking that 'he's Tony Orlando, we're Dawn.' War correspondent Mike Cerre was in charge of getting fan reaction, which are decidely mixed, as are reviews, Joan Anderson in the Boston Globe praising the show as 'feeling, thinking, rocking,' while Asbury Park Press is disgusted that fans are expected to shell out $350 to hear old hippies's shake out their political views (Young's "Let's Impeach the President" being one hot button song). The mother of a solider killed in the war is moved by CSNY's wall of pictures of the dead, believing that showing all these faces is more important than hearing statistics on the evening news. A member of the younger generation remarks that the concert has made him ashamed that he hasn't protested. Several political campaigns are followed and a Neil Young appearance on the Steve Colbert report is interspersed throughout. This is not the love fest Young's "Heart of Gold" (directed by Jonathan Demme) was last year, nor is it quite as riveting. "CSNY Déjà Vu" loses its focus going into its last act, although it picks up again for its close. The closing credit scrawl is packed with info, including the fact that 7 of the 10 politicians Stephen Stills campaigned for won.

Crosby, Stills, Nash and Young are definitely leaning the blue state way. Neil Young directs (as Bernard Shakey) this protest documentary that uses their Speech” tour as the glue to hold together what is, essentially, a condemnation of the Bush administration in its conduct of what is considered a senseless war by many (myself included). Cornerstone to the film is Neil Young’s “Living with War,” the uber-anti-war protest song and another ditty, “Let’s impeach the president.” The songs, depending on the city where they play, garner enthusiastic applause or an abundance of upraised middle fingers from the audience. David Crosby says of the Atlanta concert, with an upbeat note, “Well, only a third of them booed.” CSNY Déjà Vu” covers a lot of ground. It is not just a protest concert film. It is a multilayered view of the Iraq War and the impact it has on those called to fight it and on their family and friends. Young balances things, somewhat, by giving both sides of the arguments for and against the conflict that has consumed over 1000 American dead since the concert tour ended. The band brought their message to the multitudes with 33 concerts entertaining 376000 fans. Neil Young is on a, roll with last year’s amazing Heart of Gold” concert film and his current powerful music-filled documentary that pulls no punches in its stance against the war and those commanding it. The film praises to the hilt those who have fought the war, been maimed, killed and emotionally scarred and takes aim at those who send these troops needlessly into harms way. “CSNY” wears its heart squarely on its sleeve for all to see and takes no prisoners in stating its political mind.