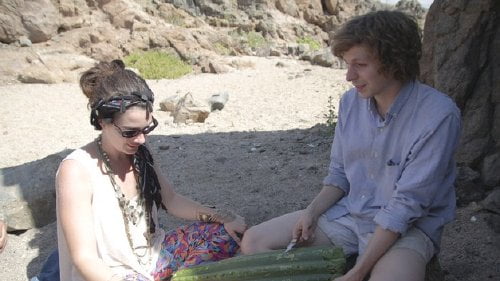 Jamie (Michael Cera) is a selfish 20-something guy visiting Chile to join his friends on a quest: trek to the north of the country to find the elusive and fabled San Pedro cactus and extract its hallucinatory essence. This dual “trip,” though, will get more complicated for Jamie when, before they set off on their journey, he drunkenly invites to join them an American free-spirit named “Crystal Fairy.”

Jamie (Michael Cera, TV's 'Arrested Development,' "Juno") is an American in Chile with a mission to find a San Pedro cactus and cook it down for its mescaline. He's found a guide in Champa and his younger brothers Lel and Pilo (Juan Andrés, José Miguel and Agustín Silva), who will come along for the trip, but on the night before their departure, the coke-fueled Jamie throws the guys for a loop by asking along another American, a free-spirit who calls herself "Crystal Fairy." Michael Cera's having a drug-addled year with first, his coke-crazed horndog version of himself in "This Is the End," and now his mescaline-seeking obsessive here and it's great to see him upending his sweet man-child persona. Jamie has a one track mind - his own desires - and doesn't care whose feelings he hurts along the way. But the real revelation of "Crystal Fairy" is former child actress Gaby Hoffman ("Uncle Buck"), whose hairy, vegan hippie may initially embarrass those around her with her complete unselfconsciousness, but whose warm-hearted embrace proves winning. Writer/director Sebastián Silva ("The Maid") has made a comic road-trip movie that has acceptance at its heart. Champa is the model of patience dealing with Jamie, who decides to 'save' the boho chick dancing by herself at a party. He tells her she's making a spectacle of herself, but Crystal Fairy doesn't buy it. She readily accepts Jamie's offer, but Champa warns that there isn't enough room to take her. Jamie suggests she take a bus and meet them. Jamie adds to the irritation by not being ready the next day, then fussing over food and drink options, but even Champa's appalled when he suggests ignoring Crystal Fairy's call when they reach their meet point, wondering how she got his number ('You gave it to her' says an incredulous Champa). Jamie avoids responsibility for her presence by belittling her at every turn, dubbing her 'hairy fairy' when her post-shower casual nudity shocks the room (a room pointedly meant for four which the Chileans graciously smooth over). The behavioral study of the entitled, obnoxious American versus the new-agey, crystal dispensing one amidst their bemused but accommodating hosts is the heart of this largely improvised road trip. The stop in which the group finds their cactus showcases different approaches - Crystal friendly and open, Jamie demanding, Champa the cautious voice of reason. When they reach their seaside destination, rituals come into play - Jamie intent on the preparation of the (stolen) cactus, Crystal on group-bonding experience sharing. Unable to get Jamie to open up about just what's bugging him, Crystal wanders off for her own psychedelic adventure and her absence finally opens Jamie's eyes to what he's shut out in her presence. Hoffman is so completely open and natural, both in spirit and the flesh, that it's difficult to imagine where the actress leaves off and the real person begins. The entire movie revolves around her. Cera's reactions are often cruel, but generally funny, his utter lack of regard for others jaw-dropping. The directors' three brothers, all making their screen debuts, paint classic older-middle-youngest siblings of a gentle variety (touchingly and gracefully, Crystal helps Pilo hide the fact that he doesn't partake of the drug, afraid of the consequences). Cinematographer Cristián Petit-Laurent's hand held camera work looks murky in interiors, but comes alive out of doors and keeps us right within the action with occasional long shots establishing the vastness of the landscape. Silva's English language debut, which won the World Cinema directing prize at Sundance, is a trip of self-discovery.

This is a quirky little road trip movie that has the sensibility and feeling of the 60s – due, in part, to the titular character. Gaby Hoffman, whom I remember as a child star in such films as “Sleepless in Seattle” and “Uncle Buck,” is all grown up, now. She gives a daring, complex performance as the life-loving Crystal Fairy and her character is far deeper than one first thinks. CF’s story is multi-layered and told incrementally as her character’s story unfolds and we see that she is not what she seems. Michael Cera’s Jamie is Crystal’s polar opposite – uptight, selfish, obsessive and controlling – and the actor gives his character nuance, though not very likable when we first get to know him. Other characters are background only as Crystal’s supporters on the journey. Structurally, “Crystal Fairy” is a pretty routine road trip movie with its mission to sample the fabled San Pedro hallucinogen. The trials and tribulations to procure the scarce cactus is done for the humor of Jamie being so near his goal and, yet, so far. Things shift gears when he finally succeeds in acquiring a piece of the infamous cactus and cooks up the mescaline-infused brew. The actual “trip” reminds me of a similar scene in the classic “Easy Rider.,” but with new millennium manners. The stars are the draw to see “Crystal Fairy.” They are characters not caricatures and you believe them real, especially Gaby Hoffman’s wonderful Crystal (or Hairy Fairy, as she becomes known to her companions). The road trip/buddy film has been with us for many decades but helmer/scribe Sebastien Silva and his stars give it their own delightful spin.