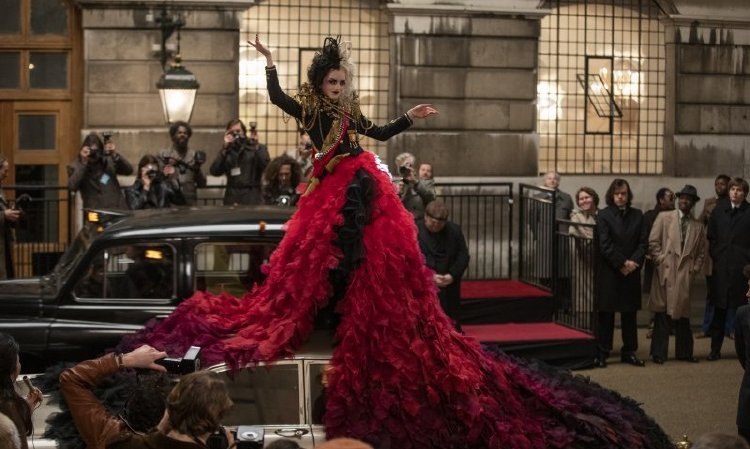 Little Estella’s (Tipper Seifert-Cleveland) rebelliousness and creativity are encouraged by her mother (Emily Beecham, "Little Joe"), who reins in the child’s naughtier impulses with a nickname, “Cruella.”

There are so many things right about Disney’s latest villainous spin on the origin story it’s a shame that one thing that is very, very wrong indeed casts a shadow over the proceedings.  Let’s just say that making “Maleficent” more sympathetic didn’t require recasting “Sleeping Beauty” herself as a monster and this film’s major failing, which happens early, wasn’t required either, so why do it?  Now that I’ve gotten that off my chest, on to all the wonderful things the movie gets right.

It was a genius idea to hire “I, Tonya’s” director Craig Gillespie (who has Disney experience with "Finest Hours"), who brought along that film’s director of photography (Nicolas Karakatsanis), editor (Tatiana Riegel) and music supervisor (Susan Jacobs, having major impact here) to influence this one’s punk rock attitude and anti-heroine.  Writers Dana Fox ("Isn't It Romantic"), Tony McNamara ("The Favourite") and Aline Brosh McKenna ("The Devil Wears Prada") coalesce, bringing essential vibes from former projects into this one’s duality theme.  Casting is excellent and all the players have been perfectly made-up, coifed and costumed (Jenny Beavan, “Mad Max: Fury Road”).

It may come as a surprise to learn that little Estella, born with the familiar half black, half white hair she will hide in adolescence, is a dog lover, terrier Buddy a childhood pet.  When her charmed life at Hellman Hall, where her mother is a maid, comes to an abrupt end when she’s orphaned, she’ll be taken under the wing of street thieves Jasper and Horace, who work with a one-eyed Chihuahua named Wink (the dogs’ portrayals are augmented with some not terribly convincing CGI).

While this Dickensonian family unit is successful, thieving isn’t really Estella’s (Emma Stone) calling.  She dreams of becoming a fashion designer and so Jasper (Joel Fry, "In the Earth") kindly gets her a job at Liberty of London, a stylish department store.  Unfortunately, she’s relegated to scrubbing toilets. Her luck turns accidentally when one night, drunk on Scotch, she trashes a Liberty window display, ever so artfully it turns out, as it catches the eye of fashion’s reigning queen, The Baroness (Emma Thompson) who hires her on the spot.  It will be as The Baroness’s assistant that the demure, red-headed and bespectacled Estrella will give way entirely to her boss’s scene stealing rival, Cruella.

The split personality announced by her hair has roots in her childhood, something the writers let us in on, but only partially.  In keeping with their black, white and red Cruella color scheme, all will be revealed via a ruby necklace, an heirloom promised to Estella as a child.  This origin story posits that there is good and bad in all of us and that without Estella’s mom Catherine’s guidance, which allowed just enough naughty to spark creativity, societal evils allow the bad to bloom.  There is also the psychological underpinning that our appearance expresses how we feel about ourselves.

Jenny Beavan’s contribution here is enormous, with The Baroness clad in classical couture while Cruella bursts onto the scene in looks inspired by Alexander McQueen, Vivienne Westwood and the current trend towards sustainability.  Her initial foray into society via The Baroness’s black and white ball is as explosive as “The Hunger Games’” Katniss’s flaming “Catching Fire” entrance.  Also exceptional is a soundtrack featuring The Rolling Stones, David Bowie, Queen, Suzi Quatro and The Clash, the most radical in Disney history (the film also boasts an original song written by composer Nicholas Britell and Florence Welsh).  Stone gets de Vil’s wild-eyed physicality right (although unsurprisingly, drips no cigarette ash), but Emma Thompson just about steals the film with her imperiously dry delivery.  The real surprise here is Jasper and Horace, the Mutt and Jeff team endearingly played by Fry and “I, Tonya’s” Paul Walter Hauser.  The film also stars Mark Strong as The Baroness’s valet and Kayvan Novak (TV's 'What We Do in the Shadows') as her lawyer, Roger.

At 134 minutes, “Cruella” runs a bit too long, but it’s flashy and fun and a huge step up from “Maleficent.”

One of my favorite animations ever is the 1961 classic, “One Hundred and One Dalmatians.” Less favorite were the live action remake and sequel starring Glenn Close as the evil puppy hunter, so I was less than thrilled to hear about the live action “origin” story told in “Cruella,”

I had a bad feeling, just minutes into watching “Cruella,” when three beautiful Dalmatians are turned into snarling, slobbering killer beasts. I need not have worried as I sat down and enjoyed this different where-it-all-began tale.

Actually, the origin story is an invention of a battery of writers, though it is “based” on the Dodie Smith novel, The Hundred and One Dalmatians (which does not have an origin story). The result is a committee effort that has a great deal of invention and takes much literary license. It also has a lot of on-screen talent pretty well used, like Emma Thompson chewing scenery, and twisting her metaphoric mustache in evil glee if she had one, as the evil, conniving Baroness. Emma Stone strikes a balance to Cruella, but I cannot help remember what she will become. Remember the fur coat?

The ground is laid, in the end, for the expected next chapter. I had enough fun this time around to give it a shot, too.

Cruella will release simultaneously in theaters and on Disney+ with Premier Access for a onetime additional fee on Friday, May 28.