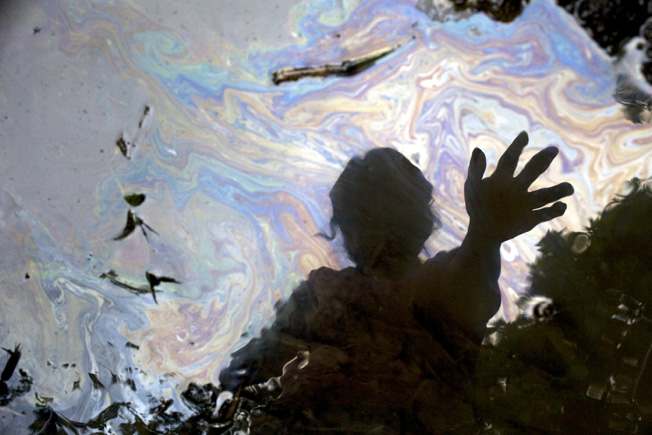 One of the world’s largest lawsuits, the $27-billion “Amazon Chernobyl” class action, is the subject of documentary filmmaker Joe Berlinger as he studies all viewpoints over one of the worst environmental disasters ever, magnitudes greater than the Exxon Valdez spill in Alaska, because of “Crude.”

In 1993, 30,000 Ecuadorans filed a suit against Texaco for contaminating their lands and water and for the many wrongful deaths, illnesses and deformities which have occurred since the U.S. oil company began producing oil in their country. Over fifteen years later, the lawsuit continues, led by home-grown lawyer Pablo Fajardo in a battle against “Crude.” Documentarian Joe Berlinger (“Brother’s Keeper,” “Paradise Lost,” “Metallica: Some Kind of Monster”) and his crew traveled into the Ecuadorean Amazon to get some amazing imagery of a new type of “Paradise Lost.” This incredible David and Goliath story is little known in the U.S. because, unlike the Exxon Valdez, which spilled oil off the coast of U.S. shores, Ecuadorean ecological disasters attract little press, despite the fact that the damage done there far exceeds what happened in Alaska. This beautifully shot film consists of testimonies from people who have lived off the land and waterways for centuries now having to face the loss of loved ones and a way of life. But despite the heroic efforts of Fajardo, who grew up watching the piggish behavior of a giant U.S. corporation destroying his country and humiliating its people, the mighty Chevron has the upper hand. For ten years Petro-Ecuador took over oil production from Texaco, so Chevron continually points the finger at its host country for its problems. Chevron environmental scientist Sara McMillen (a Cynthia Stevenson lookalike) continually denies charges, asserting that the poverty of the area perpetuates many of its problems. And yet, since Chevron came in, haven’t runoff pits been designed specifically to drain into existing streams and rivers? But Chevron has enough money to stall, and stall and stall. Fajardo is not alone in his fight. Houston based lawyer Steven Donzinger represents Ecuador at shareholder meetings. We see him coaching a native so that his words will be more powerful before corporate suits. Berlinger also shows the power of celebrity endorsement when Trudi Styler (Sting’s wife, a former actress) becomes interested after a Vanity Fair article is published in their Green Issue. However, perhaps because Berlinger is working without his codirectoring partner Bruce Sinofsky, “Crude,” although a powerful expose on a heinous disregard for a people and their environment, isn’t as compelling as the director’s prior films. The documentary begins to feel talky and repetitive, draining some of the power of its earlier stories and images. Granted, the data Berlinger is dealing with here is daunting and “Crude” presents the facts from many different angles, but a better balance of the human element against that of politics and courtrooms would have given the film a stronger emotional hook.

The lawsuit that Berlinger showcases in “Crude” has been going on for 16 years, back before Chevron acquired the defendant corporation in the suit, Texaco. It is made obvious, through interviews with company spokespeople, that the company has very deep pockets and its legal strategy is simply to outlast the plaintiffs, some 30000 Ecuadorians in the class-action suit. The case venue, though, was transferred from the corporation-friendly US, to the more plaintiff-friendly Ecuador and the plaintiffs, whose cause received international exposure in a Vanity Fare magazine article, again have hope of winning. It does not hurt their cause to have Trudie Styler and Sting in their corner. The film follows the current doings of the suit and attempts to give both sides of the argument. However, the arrogance of the Chevron representatives and lawyers and their blatant denial of the destruction of the land by their predecessor, Texaco, gives credence to the plaintiffs’ case. The filmmaker shows what damage the toxic dumping of crude oil by-products into the Amazon basin has on the land and its inhabitants. You do not get the usual litany of animals dying in oil spills (well, there is one such shot) and do receive a slew of information and statistics. There is much data packed in here and it can be an overload. Some fascinating characters come to the surface in “Crude.” Pablo Fajardo, the attorney for the plaintiffs, is a smart, articulate and dedicated man who has given his time and legal counsel to bring justice to the Ecuadorian people. Emergildo Criollo, a man whose children died horribly due to the toxic dumping, becomes a spokesperson for his Cofan people and Ecuador and a force in the case. The defendants’ attorneys and representatives, though, are a faceless group and their uniform stonewalling of the facts makes them an unsympathetic lot with little coaxing by the director. Joe Berlinger gives “Crude” as even-handed a treatment as he can in a film that is a true David and Goliath battle that turns into one of good versus evil. The magnitude of the devastation inflicted on the Ecuadorian landscape by Texaco is shown without sensationalizing the facts. This is good documentary filmmaking and an interesting, thought-provoking, subject.