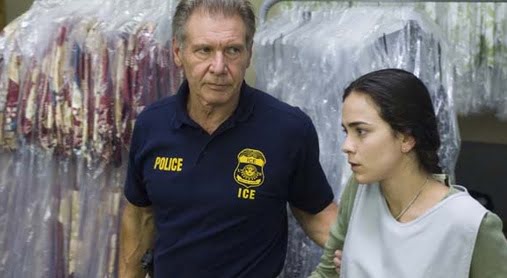 Writer/director Wayne Kramer ("The Cooler") explores illegal immigration from both sides, charting the varying stories of a Mexican factory worker, a British musician, an Australian actress and the sister of Hamid Baraheri (Cliff Curtis, "Whale Rider," "Push"), the partner of customs agent Max Brogan (Harrison Ford). Those like Brogan, immigration defense attorney Denise Frankel (Ashley Judd) and her husband applications adjudicator Cole Frankel (Ray Liotta, "Smokin' Aces," "Wild Hogs"), find that their work defines their lives, intertwined as they are with those whose dreams depend on "Crossing Over."

Kramer deserves some credit for getting his 'immigration Crash' put together and out, seeing as how Sean Penn's performance had to be excised because the actor reportedly reacted badly to an Iraqi honor killing subplot (as if the filmmakers actually condoned this? I don't get it...), but in truth "Crossing Over" is just not a very good film. It features bad acting, some pretty black and white situations, an actual car crash (!) and could even be considered misogynistic. It's too bad because Kramer has assembled an interesting cast and has woven his overlapping stories more organically than the ones in "Crash." The film opens with a sweat shop bust in which Harrison Ford's character is established as a softie, an immigration officer who might turn a blind eye to a young Mexican woman huddled behind a clothing rack if a colleague had not also spotted her. Unable to sleep that night, Brogan locates Juan, the small child of Mireya Sanches (Alice Braga, "I Am Legend," "Blindness"), and brings him to his grandparents (why they are seemingly legal residents and their daughter is not is never addressed). Gavin Kossef (Jim Sturgess, "Across the Universe," "21") is a British musician who uses his Jewishness to appeal for everything from a job at a Jewish school to aid from a rabbi at an immigration hearing. His girlfriend, Australian actress Claire Shepard (Alice Eve, "Starter for 10"), is ready to ditch him for a potential American husband until, after an unsuccessful attempt to bs an immigration officer, she crashes into the car of Cole Frankel, a guy who offers her a suspect green card for two months of sex. Just guess which of these two users is successful attaining residency. You'll probably be hoping they both get booted. Cole's married to immigration lawyer Denise who, in the film's least developed story, is toying with adopting a young African girl who's been stuck in a detention center for six months. We know Denise is another well-meaning liberal by the gold Africa pendant she always wears around her neck. The Frankel marriage is another enigma the film never explains. Religion is a strong factor in two other subplots. Taslima Jahangir (Summer Bishil, "Towelhead") reads an essay in class that defends the courage of the 9/11 hijackers. For that she gets the same epithets slung at her as Bishil did in "Towelhead" and the righteous ire of Special Agent Phadkar (Jacqueline Obradors, "Tortilla Soup," TV's "NYPD Blue"). Bishil is a horrible actress, over enunciating every word, and she evokes little sympathy even as the free speech issue her story illustrates hits its mark. Brogan is invited to his partner's home to celebrate the upcoming naturalization of Hamid's father, but leaves in disgust when he witnesses the treatment of Hamid's Americanized sister Zahra (Melody Khazae), whose overt sexuality is condemned by her Muslim family. Surveillance tapes will provide Brogan with a means to an arrest when Zahra is discovered shot dead with her lover in a motel room and they will also provide a means for Hamid to cleanse his soul when he lets a young Korean convenience story robber who has just become an accessory to murder to leave with the evidence. Yong Kim (Justin Chon, "Twilight") was just taking out the trash when a neighborhood gang decided he was ripe for the picking. There is nothing subtle about "Crossing Over," which climaxes with a murderer arrested during the citizenship ceremony several characters have been leading up to. Taslima leaves the country with the now-popular image of the United States flag seen from behind, i.e., backwards. I'm sure you can guess what happens to Mireya.