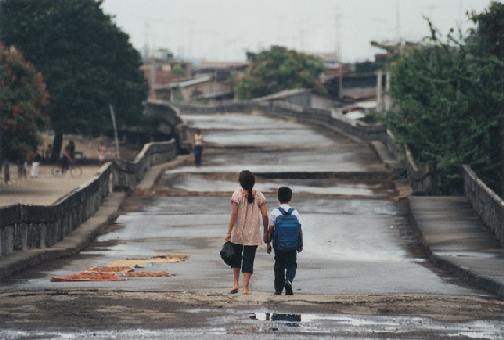 Investigative reporter Manolo Bonilla (John Leguizamo, "George A. Romero's Land of the Dead") is in Ecuador doing a piece on the latest victims of the monster of Babahoyo, a serial killer with 150 dead children to his name, when he and his team witness and record the brutal mob violence that befalls Vinicio Cepeda (Damián Alcázar, "The Crime of Father Amaro") when he accidentally causes the death of the murdered boys' twin brother. Visiting Cepeda in prison for a followup piece, Manolo smells a scoop when Vinicio offers him information about the monster in exchange for a sympathetic story designed to aid his release. The Miami-based news magazine, 'One Hour with the Truth,' becomes anything but as Bonilla puts himself above the law in "Crónicas."

**Warning - this review contains spoilers** Mexican writer/director Sebastián Cordero kicks off his tale of media corruption with a gloriously biting bit of symmetrical coincidence, but while the details he uses to flesh out his story are often rich and intriguing and his supporting characters subtly shaded, his main harangue on media manipulation and dishonesty is too obvious and his main character one-tracked. Bonilla gambles and we never expect him to do anything but lose. Just as there is no doubt that Cepeda is, in fact, Babahoyo's monster, even if Cordero expects his audience to think otherwise. The film opens with Vinicio washing himself clean at an outdoor lake, scrubbing his clothes in a pan and taking his empty liquor bottle before driving back into town and purchasing a newspaper screaming 'rapes and buries them!' He's made uncomfortable having to stop as three small, white coffins are paraded across the road. His own little boy, Robert (Luiggi Pulla), hops into the cab just in time to identify Joseph Juan, who's run in front of the now moving truck. As the crowd who has just attended the triple funeral gather, Don Lucho (Henry Layana) realizes that he has just buried one son and now must bury the other and his grief incites the mob to drag Vinicio out of his truck, tie him up and beat him. Lucho douses him with gasoline and sets him on fire. Bonilla and his team, who had been preparing to interview the young boy, get the whole thing on tape. This opening piece of drama, while steeped in the ironic coincidence of screenwriting, hurdles us into suspension of disbelief nonetheless. Cordero spins so many plates in the air that we're too busy taking in all the contradictions on display - journalists watching a man being brutalized and doing nothing but recording it, the irony of a killer's dismay at accidentally causing the death of the brother of his very intentional victim, the feeling of alarm Cordero engenders watching a mob misinterpret a helpful action as the fleeing of a crime and then realizing it is sympathy for the devil - to think about the confluence of happenstance. Then Cepeda gives Bonilla his piece of information, something which Manolo and his cameraman Ivan (José María Yazpik, "Nicotina," the upcoming "Innocent Voices") verify under very gruesome conditions, and Bonilla makes a choice, believing he is more capable than local the Capitan, Rojas (Camilo Luzuriaga), in obtaining a confession. At least that's what he tells himself. Bonilla's moral character is further condemned by his constant lies to his interview subjects and the show's producer/host, Victor (Alfred Molina, "Spider-Man 2"), who he also cuckolds by beginning an affair with his field producer Marisa (Leonor Watling, "My Life Without Me," "Bad Education"). Once Cordero sets Manolo on his path, he drives forward like a pit bull. The journalistic trio defy Rojas, 'the only honest cop in South America,' who has clear suspicions about Bonilla's actions, and manipulate the truth for their desired outcome. Marisa expresses some doubt about what they're doing, but she doesn't seem to have much heart in it and, in fact, is the one to grease the wheels. The only grey areas Cordero allows are outside of their arena. Vinicio's pregnant wife, Esperanza (Gloria Leiton), also learns the truth and suppresses it, economics and youthful neediness overriding judgement. Cordero paints his villain with more points to ponder than his protagonist. Leguizamo, in his first Spanish language film, is all slick sleaziness, ambition his be all and end all. The actor never seems to express any doubt. Even when Manolo's been seriously trumped, Leguizamo only projects anger and a need to flee. Ironic end notes about the news man's having become the news seem lost on him. On the other hand, Damián Alcázar gives a many layered performance. The beleaguered Vinicio is a soft-spoken, gentle type of man who takes on a weirdly dreamy expression with the eyes of a zealot as he relates what the monster told him. Reports describe the killer as a man with the ability to charm children, as Alcázar does this, more convincing to his ends than Leguizamo's seduction of Joseph Juan. Watling is blandly competent, but Yazpik's cold assessments can be chilling. Camilo Luzuriaga notably invests Rojas with decency, his competence frustrated by higher ups and outside expectations. Also good is Leiton, making Esperanza's desperation palpable. Sebastián Cordero sets up an intriguing situation, full of potential, then lets it play out exactly as one would expect. Still, "Crónicas" can be fulfilling looks beyond Cordero's central theme to the way he is able to define a region and how its economy affects its people, setting them up for exploitation. Once his newsmen are off, Cordero gives us one last look at what they've left behind and it delivers quite a jolt.

There’s a monster loose in Babahoya, Ecuador and over 150 children have disappeared. Miami television journalist Manolo Banilla (John Leguizamo) is on the scene when a car accident takes the life of the twin brother of one of the victims. The driver, Vinicio (Damian Alcazar), is accused of trying to flee the scene and is brutally beaten by the crowd – under the always watchful lens of the Banilla’s TV camera. Manolo smells a story but the result will have shattering ramifications in “Cronicas.” Sophomore writer/director Sebastian Cordero created a mildly intriguing serial killer fable but one, in the end, that falls flat. John Leguizamo, as journo Manolo, is the weak link in “Cronicas.” The actor, in his first dramatic lead, fails to compel as a man whose mission, first and foremost, is to get the story, no matter what, and boost television ratings. Unfortunately, his performance is overshadowed by those around him and by a story that is both ambiguous and obvious. The film starts out with Vinicio bathing in a river and washing his clothes. This is followed with news reports of missing children found brutally raped and murdered so the association between the man and the missing children becomes all too obvious. Much of the rest of the film is spent trying to distract the viewer and make you think that Vinicio is innocent – or, is he? The guessing game that Cordero tries to create is obvious in its attempted slight of hand. I was not kept in wonder of the truth by the film’s end. The integrity, or lack thereof, of journalists is also handled with a heavy hand. The script and lack of charisma by Leguizamo is almost made up for by some solid supporting performances. Damian Alcazar does a fine job as the suspected killer and gives a performance steeped in modesty and apparent innocence. Leonore Watling, as Manolo’s producer, gives a fully defined performance. Jose Maria Yazpik, as cameraman Ivan, is credible as a journo that puts the images he captures before the suffering he sees through his camera lens. Camili Luzuriaga, in a small role as crime investigator Captain Rojas, also does a fine, believable job. None of these fine performances can overcome the inherent problems, though. The workings of the mind of a serial killer should be thought provoking and frightening. Cordero tries to humanize his monster and, as such, takes the wind out of “Cronicas’s” sails. I came out of this far less than satisfied.