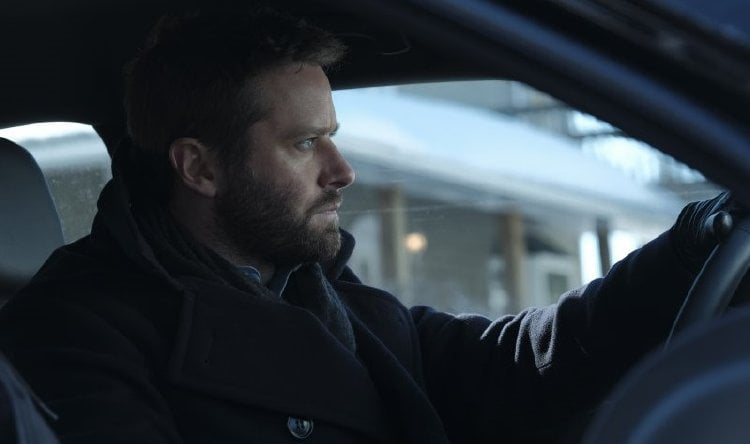 When Cedric Beauville (Charles Champagne) is caught with a backpack full of Fentanyl on the snowy U.S. Canadian border, Detroit DEA agent Jake Kelly (Armie Hammer) explodes.  He’s on the cusp of breaking up a Montreal drug ring led by Mother (Guy Nadon) and this leak will invite suspicion.  At his university, Dr. Tyrone Brower (Gary Oldman) finds himself caught between Dean Geoff Talbot (Greg Kinnear) and the 780K grant being proffered by Northlight Pharmaceuticals’ Dr. Bill Simmons (Luke Evans) when his trial of Northlight’s ‘addiction free’ painkiller proves it worse than OxyContin multiple times over.  Meanwhile architect Claire Reimann (Evangeline Lilly), a recovering oxy addict, is about to deal with inexplicable news when her sixteen year-old son David (Billy Bryk) fails to return from school.  All three are facing different angles of the same “Crisis.”

Writer/director Nicholas Jarecki, the half brother of filmmakers Andrew and Eugene, follows up 2012’s hedge fund thriller "Arbitrage" with a flat-footed attempt to apply Soderbergh’s “Traffic” supply chain approach to the current opioid epidemic.  Ironically the best performance is featured in the least believable of Jarecki’s three story strands.

This may be the last film featuring a new performance from Armie Hammer in some time and he fashions his DEA agent as unswervingly rash and pissed off.  In fact, his behavior is so dark, at first one believes he is in on the drug deal.  While he jabbers about Mother’s money men ‘The Armenians’ (the clichéd scarred face one tells Jake he ‘doesn’t sound sophisticated,’ one of several eyeroll-worthy lines of dialogue), his fleetingly seen boss, DEA supervisor Maria Garrett (Michelle Rodriguez), frets about the 600K of taxpayers’ money he’s already in the hole for.  He’s also got a sister, Emmie (Lily-Rose Depp), who escapes rehab only to face ‘tough love’ in a form that cannot help but recall Hammer’s current scandal.  Jarecki plays his partner, only gaining relevance for a plot twist.

The best part of the story belongs to Oldman’s professor in which we witness the pressures put on academic research in order to retain funding.  Here too, the story flips, our initial impression being that Brower’s loyalty lies with Northlight until we see his astonishment when his boss turns out to be the ethically challenged one.  Oldman’s mealy-mouthed performance is odd (he does gain stature the more the deck is stacked against him), the dialogue representing his repartee with Talbot awkward.  Jarecki goes out of his way not to paint his faux Big Pharma as outright villains, leading us to wonder why Northlight would so willingly face their self-made whistleblower and lawsuits waiting to happen.

Evangeline Lilly is the film’s standout in the ‘even well-to-do folks can become oxy addicts’ role.  She appears embarrassed to be in a local recovery group, but is beginning to regain her footing.  Claire enjoys a good relationship with her son and asks him to pick up tortillas for that night’s dinner with his aunt, but when he fails to come home, Claire turns into a super sleuth.  Lilly, looking more haggard as the film progresses is the very picture of a distraught mother pulling out all the stops to find out what happened to her son, but Jarecki’s got her loading guns and busting windows until we have to remind ourselves she’s not a cop but an architect.

Jarecki had a good idea for “Crisis,” but he never gets his arms around the scope he’s set for his project which nonetheless feels lacking – where, for example is the medical profession in all this?  Perhaps there was a much longer film hacked down for running time, which would explain why actors like Martin Donovan and Michelle Rodriguez barely register (I’m still trying to figure out who Mia Kirschner played – Claire’s sister perhaps?).  Story lines are muddled and only two of them intersect for reasons I’m still not sure of.  If you’re coming in to “Crisis” to learn about the opioid epidemic, you’d be better off searching out one of the many documentaries on the subject until a better feature film comes along.