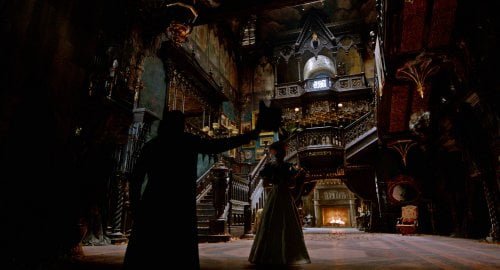 'Ghosts are real' Edith Cushing (Mia Wasikowska, "Alice in Wonderland," "Tracks") tells us, reflecting on the spooky visitation she received after her mother's death when she was just 10. Fourteen years later, the young woman's father (Jim Beaver, HBO's 'Deadwood') is suspicious of the British Baronet, Sir Thomas Sharpe (Tom Hiddleston, "Thor," "Only Lovers Left Alive"), who's looking for investment in his clay mining machine and courting the daughter who was warned long ago 'Beware of "Crimson Peak."'

Cowriter (with Matthew Robbins, "Mimic")/director Guillermo del Toro ("Pan's Labyrinth") has indulged his Gothic sensibilities with this insanely lush paean to Hammer Horrors, a cross between Jane Eyre, Bluebeard and Hitchcock's "Rebecca" capped off with a gush of Grand Guignol. Thomas E. Sanders' (Copolla's "Dracula") production design and Brandt Gordon's ("Mr. Magorium's Wonder Emporium") art direction take us into the belly of the beast with wood carved Gothic halls reminiscent of a rib cage and a rickety iron elevator that plunges into the bloody bowels of Allerdale Hall. While the mystery is fairly easy to unravel, the movie is a feast for the eyes. At the onset of the 20th century, Edith is an aspiring author whose free thinking has damned her in the eyes of society matron Mrs. McMichael (Leslie Hope, '24's' Teri Bauer), the mother of her long time beau Alan (Charlie Hunnam, TV's 'Sons of Anarchy,' "Pacific Rim"), an ophthalmologist and Arthur Conan Doyle enthusiast. Sharpe's arrival with his oddly predatory sister Lucille (Jessica Chastain, "The Martian") has Buffalo abuzz, McMichael smelling a match for daughter Eunice (Emily Coutts). But it is Edith who catches Thomas's eye and her father Carter is uneasy enough to hire private detective Holly (Burn Gorman, "The Dark Knight Rises"). He learns the truth too late, dying in a gruesome accident. The bereft Edith is swept off to Cumberland, England, a new bride. Allerdale Hall looks magnificent on approach, but what Edith finds is a crumbling manse where leaves swirl in through the roof and floorboards seep with the red ooze her husband believes will be their salvation. She immediately befriends a fancy little dog her husband seems surprised to find, but she's no sooner settling when she begins to see ghoulish specters. And then there's Lucille, who when she's not guarding her housekeys or showing Edith a book's erotic fore-edge painting is serving copious amounts of tea. The film celebrates excess, but gloriously so, from Kate Hawley's ornate costumes to a level of splatter not usually associated with Victorian period films. Hiddleston is the acting MVP here, his seductive powers in service to a back story that almost makes him part femme fatale part damsel in distress. Wasikowska is a live action version of "Beauty and the Beast's" Belle, albeit one in direr straits. Chastain appears to be having a ball in full Mrs. Danvers mode. Hunnam is the likable as the stolid and strapping scientist and Beaver convinces as a turn of the century industrialist protective of his indulged daughter. The film also features the del Toro produced 'The Strain's' Jonathan Hyde as Edith's prospective publisher Ogilvie. But while "Crimson Peak's" opulent, blood red visuals are a treat, the story itself is riddled with implausibilities and nagging details (for a start, Allerdale Hall sits atop a barren hill, so where are all those damned leaves coming from?). Still, it's a lush fever dream, an entertainingly over-the-top gothic romance. Grade: